Supergirl has begun tapping upon the presence of the true architects behind Season Five’s apparent threat, in turn also revealing William as an undercover ally, one that’s all too happy to work with Kara in her civilian identity. Despite this buildup toward the proper exploration of Leviathan and their agenda however, “Dangerous Liaisons” ended up being a rather weak episode for Supergirl, saddled with a dull villain and a lot of tedious storytelling. Lena was once again the big bright spot though, as she begins her experiments on Q-Waves, with Malefic’s begrudging aid.

One of the biggest weak spots in this episode, sadly, is William, again. William may no longer be an unlikable jerk that Kara is inexplicably being set up for a romantic arc with (or so it appears), but he’s now compensated for that by becoming a colossal moron. After Kara gets William in on a DEO interrogation so he can get new leads on Andrea, for example, William loses his cool and gets kicked out of the interrogation, being unable to follow simple directions, like a boob. Later on, William scolds Kara for breaking into Andrea’s office, despite the fact that he’s also breaking into Andrea’s office, believing he can just sit on Andrea’s laptop and pull intel, before obviously finding it protected. Well, no shit, Sherlock! I don’t know what’s going on with the writing behind William, but he was getting better in the previous episode, only to get worse again here, and that’s very annoying. 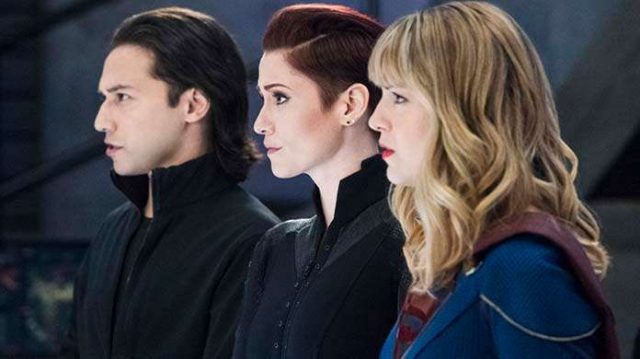 Even more annoying is an otherwise promising connection between William and the show’s latest villain-of-the-week, which is completely squandered. Apparently, William is aggressively trying to incriminate Andrea because she was connected to his former best friend, Russell Rogers, who was apparently killed by a mysterious tech-based criminal, the same criminal that Kara and the DEO end up being pointed towards, after he breaks into Lex Luthor’s vault and steals a laser weapon. This villain is Rip Roar, one of the impressive New Gods in DC Comics lore, but in the case of the Supergirl universe, Rip Roar has no connection to the New Gods, and is instead an ordinary guy with a Robocop helmet and a poor man’s Doctor Octopus harness. Oh, and Rip Roar is so obviously Russell that it hurts, right from the jump! Despite this however, no one seems to piece together the obvious, which is made worse when Rip Roar is an unimpressive threat, one that’s a total patsy for Leviathan. At least Kara and the DEO successfully capture Rip Roar, presumably to interrogate him in the following episode, but man does it hurt that Supergirl took such a cool DC character, and turned him into such a lame, disposable baddie with no real connection to his DC Comics counterpart.

Rip Roar’s desire to use Lex’s laser to punch a hole through a glacier, thus causing floods on coastal cities around the world (not quite sure how the science of this works, but it’s the Arrowverse, so whatever), prompts Kara and J’onn into action, in a fairly decent display of saving the day, one that’s somewhat ruined by once again turning Dreamer into a lame Deus Ex Machina. Seriously, there are still no clear rules regarding Nia’s powers and how they work! Why?! Well, regardless, this attack by Leviathan ends up actually exonerating Andrea, who would stand to lose billions if the attack was successful, since Obsidian North was right in the planned flood zone, and that’s actually a decent twist. This incident also coincides with the launch of Andrea’s VR contact lenses to boot, which are not only laughably unrealistic, but surprisingly have virtually no effect on the episode’s storytelling. I imagine that they’re going to tie into future storylines, but for such a big day at Obsidian North, the VR launch ended up getting quickly buried by the episode’s other story developments.

Like I said though, Lena at least picked up the slack, with a standout subplot that started forging her partnership with Malefic. After Lena offers Malefic the opportunity to remove his mental limitations, which will allow him to attack and kill J’onn without causing suffering to himself, Malefic helps Lena isolate the necessary Q-Wave frequency to utilize her own mind control. In the end though, Lena ends up betraying Malefic, using the very technology that Malefic helped her build to incept him, and force him to stay in the lab. This was a brilliant turn, and a cool inversion of the usual Luthor family tactics, namely using that Luthor deviousness to stop violence, rather than cause it. Now that Malefic is a full-on slave to Lena as well, I’m looking forward to seeing what else Lena can squeeze out of J’onn’s evil brother, before he presumably escapes, and goes back to chasing down the Martian Manhunter.

There’s one other storyline here, namely involving the, “Date-a-versary” between Kelly and Alex, but it’s so gag-worthy and pointless that it’s really not worth mentioning. Essentially, this small subplot only serves to set up a friendship between Kelly and Nia, which is done in a laughably contrived way, one that makes Kelly look weak and immature, rather than justifiably emotionally vulnerable. Supergirl seemed like it was pretty stable over the past few weeks, if not amazing, but, “Dangerous Liaisons” sadly ends up being a real sour note for the show’s newest season. William has started taking steps backward in the narrative again, and the entirety of the writing and presentation behind Rip Roar is pretty bad. Lena, thankfully, is continuing to be the show’s best character at this point though, and the way that she yet again tricks Malefic into following her agenda is pretty awesome. The characters are clearly getting closer to discovering the real threat to them, and I can only hope that the growing emphasis on Leviathan leads to another improvement in the storytelling, because Supergirl is once again trying too hard to force story turns that really don’t work that well in execution.

Supergirl 5.5: "Dangerous Liaisons" Review
Supergirl stumbles with a rather weak episode in, "Dangerous Liaisons", one that presents a lacklustre villain to go with a weirdly inconsequential launch for Obsidian North's VR lenses.
THE GOOD STUFF
THE NOT-SO-GOOD STUFF
2019-11-18
60%Overall Score
Reader Rating: (0 Votes)
0%