After a tumultuous production period in the wake of its third season, Rick and Morty finally appears to be back on track with the debut of its fourth season. Season Four will be split into two halves, each running five episodes in length, and that leaves the long-awaited Season Four premiere to debut this year, just over two years after Season Three concluded in October of 2017, while the latter half of the season is seemingly set to air in 2020. The wait has once again been rather long in this case, but it’s definitely worth it, as, “Edge of Tomorty: Rick Die Rickpeat” is a reliably excellent season premiere for Rick and Morty, presenting yet another creative new adventure across a duo of storylines, while also airing a few grievances from the showrunners in a cleverly meta fashion.

All in all, this episode has everything that most Rick and Morty fans could ever want in a new offering for the series, especially after having to wait so long for the show to return 0nce again. This season premiere immediately begins with a very clever hook, as Rick takes Morty with him to a planet that contains a rare mineral called Death Crystals, which allow someone to see how they’re going to die in the future. After Rick takes a few of them for an unspecified experiment, Morty hoards one of the crystals for himself, after seeing that it can lead him to dying with Jessica as an old man. Now empowered by not having to fear death, Morty even decides to fly the spaceship at this point, only to crash and accidentally eject Rick from the cockpit, killing him. In any other series, this would be quite the shock, but for Rick and Morty, it’s hilariously par for the course, especially when we see the subplot that this turn leads into! 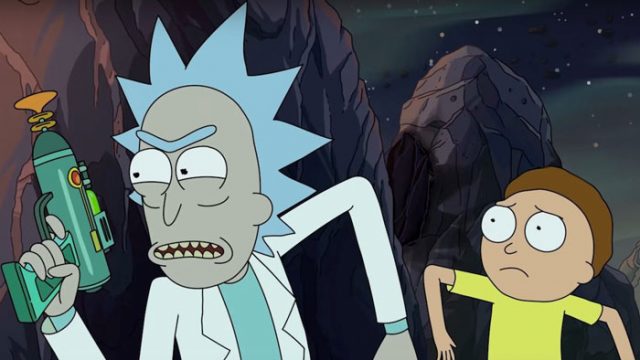 For the most part though, the bulk of this episode focuses on Morty, as he does whatever illogical and random thing he needs to do in order to preserve his apparent death with Jessica at a ripe old age. This presents lots of comedic possibilities, naturally culminating in Morty becoming more crazed and power-hungry as the episode goes on. Eventually, Morty even goes full, “Akira” too, as the characters say, becoming so all-knowing and powerful from the Death Crystal he carries that he essentially becomes an unstoppable super-villain, one wielding the full psychic and scientific force of Rick’s apparent arsenal, all the while ignoring a weirdly politically-correct hologram of Rick, who appears in an effort to try and convince Morty to activate his grandfather’s clone body. Oh, and Mr. Meeseeks comes back! That alone is worth celebrating, especially when the episode features a, “Kirkland Mr. Meeseeks” knock-off brand, where the Meeseeks creations are red, angry and smoke cigarettes. That’s just awesome!

While this hysterical strangeness is going on with Morty, Rick also wakes up in a clone body, only to find himself in a fascist version of his recognizable universe. This presents a surprisingly ingenious opportunity for Rick and Morty to do something that only a show like Rick and Morty would dare to do; Openly and aggressively troll its own fanbase! It’s no secret that there’s a particularly nasty subset of Rick and Morty fans that completely and perhaps willfully misunderstand the rhetoric of the show and the portrayal of the characters, in turn driving them to be entitled, unstable and highly demanding of the show’s supposed forsaking of its roots. This issue has of course been exacerbated by the latest, very long two-year wait between Season Three and Season Four as well. The drawn-out wait between Rick and Morty seasons is something that the showrunners and Adult Swim alike have started to claim will be lessened in future however, now that Rick and Morty has secured a colossal 70-episode order from the network, beginning with the current season, while in turn cementing itself as one of the most beloved and celebrated adult animated shows in history.

The subplot with Rick doesn’t manage to intrude that highly on the core storyline with Morty and his Death Crystal, but it’s still very funny to see Rick constantly reincarnated into increasingly ridiculous parallel universes, which keep putting him in clone bodies of different species, as demands keep being shouted at him to fall in line. Eventually though, Rick does manage to return after reaching a non-fascist wasp universe, wherein he enjoys a, “Meal” of a grub-like Mr. Goldenfold, and his larvae. It’s grotesque, disturbing, and very, very funny, rounding off the outstanding troll of the toxic sections of Rick and Morty’s fanbase, while also leading nicely into Rick returning to his home universe, just in time to liberate Morty from the throes of his Death Crystal, destroy his own hologram, and set everything back to the status quo. As you do.

“Edge of Tomorty: Rick Die Rickpeat” is another fantastic oasis to follow the long, unforgiving psychological desert that comes with waiting for new Rick and Morty episodes. The show wasted no time getting back into its groove with the Season Four premiere, hitting the ground running with a very creative and hilarious core story hook for Morty, while Rick’s subplot provided a nice opportunity to chastise unrealistic fan expectations after the show’s long delay. In the end, Rick and Morty making a meta declaration during this episode’s final seconds that they’re fit to balance the new with the old in their adventures to come, before chewing out Summer for making sarcastic claims in response to being left out of the show’s episodes again, provides the perfect assurance that Rick and Morty is back, and it’s going to be better than ever from here! Adult Swim may be claiming that the wait between Rick and Morty seasons will be lessened from here on out, but personally, I’m happy to see the show upholding a quality-over-quantity approach with the start of Season Four, taking its time to maintain Rick and Morty’s crown as one of the best adult animated sitcoms that television has ever blessed us with.