Pied Piper’s Hooli acquisition has left them with quite the mess to sort out, as a huge flood of former Hooli employees have now found themselves on the company’s payroll. Among these employees is Ethan, Richard’s former superior during his first days at Hooli, which in turn results in an uncomfortable trip down memory lane for Richard. “Maximizing Alphaness” actually covers quite a lot of storytelling ground even beyond this, with Monica, Gilfoyle, Gavin and Jared all headlining their own separate storylines, resulting in an episode that feels overstuffed, but is at least funny enough to remain entertaining.

With the characters spread so thin in this episode though, none of the jokes behind their storylines feel like they fully grasp their true potential. Gilfoyle in particular has a rather miniscule plot in this episode, while Dinesh continues to exist merely to run around and say snide things to Richard. It really seems evident that Silicon Valley has mostly run out of meaty story ideas for Dinesh and Gilfoyle at this point, so their characters just seem to take up space, or spout throwaway jokes in throwaway storylines. Gilfoyle once again did this here, though admittedly, his throwaway joke plot, which involves a reluctant game of chess and friendship with former Hooli server guard, John is one of the funnier highlights of this episode. It’s especially served well as an occasional cut away from the other storylines, where it can function as the highest point of comic relief in this particular episode.

Consequently, Richard’s core storyline is also pretty solid, which is good, since Richard yet again takes up a heavy chunk of focus in this episode. Richard having to re-hire his former superior, Ethan to try and get Pied Piper out of the technical hole they dug themselves into for their new internet launch, much to the chagrin of Dinesh and Gilfoyle, is a pretty sound idea on paper. The comedic hook here as well is that Ethan is very demeaning to Richard, namely by routinely insulting and humiliating Richard in front of his employees. This eventually leads to Dinesh, again anchoring a simple throwaway joke here, showing Richard a silly video about, “Maximizing Alphaness”, which is supposed to bring out Richard’s inner aggression and manliness.

This is a pretty funny joke in concept, and Richard eventually acting on it by punching Ethan, only to injure himself and leave Ethan completely unharmed, is a legitimately funny payoff. There’s just too much going on in this episode to really make the most of this Richard/Ethan hook though, even when the fallout of this plot does present an interesting tease with Jared and Holden. Speaking of, if anyone got the short end of the storytelling stick in this episode, it was Jared. Jared spends the entire episode tracking down his birth parents, and eventually finds them, only to learn that he was given up to simplify the family’s travel plans. While this is very amusing, this joke really needed more room to breathe in order to register this key story development as being truly important for Jared’s character. Instead, all it’s positioned to do is leave Jared back where he started in the season premiere, once Gwart fires him at the end of the episode. 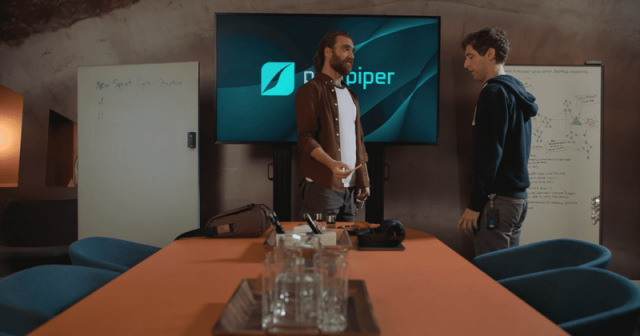 I will say though that Gwart managed to exist within another of this episode’s more clever hooks, even if this is another storyline that sometimes feels dragged down by the overstuffed narrative. After Monica reunites with Laurie at a restaurant, and requests to be a part of the ‘Women in Tech’ panel that Laurie is helping put together, Monica ends up being placed as head of Foxhole’s management by Richard, a seedy app that’s bad for her image. After dumping the app on underling, Priyanka however, Monica ends up being upstaged by Priyanka at the subsequent panel, after Priyanka undertakes a bunch of initiatives through which to make Foxhole more lucrative and female-friendly. It’s a very funny turnout, while also smartly positioning Gwart to be poached by Laurie, who is in turn now freshly freed up after Richard shut Maximo out of Pied Piper. It’s just too bad that more focus couldn’t have been placed on this clever feminist satire though, because it’s very well put together here.

The remaining storyline in this episode belongs to Gavin, who has decided to embrace life as an author after leaving the tech industry. This ends up being another throwaway joke subplot in the end, but at least Gavin’s emotional suffering is once again funny to watch unfold. There’s also another interesting idea brought up in this subplot too, namely that no one cares about Gavin’s book, and they only ever want him to talk about tech. This eventually leads to Gavin being declared an, “Anti-tech evangelist” by someone at MSNBC, which Gavin eventually decides to take the bait from. This could be a nice way for Gavin to be a solid last-minute obstacle for Pied Piper, before the series ends, but honestly, with Hooli now being fully acquired by Pied Piper, Gavin seems like he’s well and truly lost by this point. It might be best to just prepare the character an exit for now, seeing that Silicon Valley only has three episodes left at this point, and Gavin would need to pull a hell of an ace maneuver to have any chance of threatening Richard’s company at this stage.

“Maximizing Alphaness” delivered plenty of Silicon Valley’s reliably sharp humour, but its overly busy narrative sadly leaves it feeling like a weak link in the show’s final batch of episodes. A lot of the jokes suffered by not being fleshed-out enough, on top of clever ideas like Monica’s sudden interest in fourth-wave feminism, and Jared finally meeting his birth parents, which really felt like they needed more screentime to deliver worthy payoffs for those respective characters. At least the purely humour-driven Gavin and Gilfoyle subplots knew their place though, despite Gavin in particular feeling like he barely has anywhere left to go on the series at this point. Even Richard having to overcome the annoying mockery of his former superior missed a bit of its potential, despite an admittedly funny result of Holden bullying Ethan into submission, in turn setting up Jared to try and win back his former role at Pied Piper. Perhaps Silicon Valley’s shortened final season order is to blame for the mess of subplots here, though I imagine that the series will tighten its plotting in the following episode, where it can likely more earnestly move towards the show’s overall endgame.