After so much cryptic focus on whatever strange mission Angela has found herself on throughout much of Watchmen’s run so far, the show makes the interesting decision to once again move away from Angela for the most part, in favour of another character-focused episode. This time, it’s Wade Tillman/Looking Glass who takes center stage in, “Little Fear of Lightning”, which is good, since Wade’s character hasn’t received a whole lot of honest development at this point. It turns out that there’s quite the story to tell behind Wade’s character as well, since he’s actually a survivor of Veidt’s psychic squid attack on New York from 1985, during the climax of the original Watchmen graphic novel!

This explains why Wade’s Looking Glass mask is made from ‘reflectatine’, a fictional substance unique to the Watchmen universe, which can supposedly block psychic attacks. Wade has even layered his civilian trucker hats with reflectatine, and essentially can’t function when he isn’t wearing it. This was merely the first reveal within a thoroughly outstanding examination of Wade’s character however, with this episode in general being another of Watchmen’s best so far. Despite such a strong and intriguing overall mystery being baked into the show’s debut season at this point, Watchmen’s storytelling really seems to excel most when it develops a strict character focus, as it did during the Laurie-focused episode from a couple of weeks ago. That’s not a sign that the show needs to pivot overall, but I do appreciate how many mysteries lie within the psychologies and histories of the various characters on the show, and not just surrounding whatever strange conspiracy is going on within Angela’s end of the storytelling. 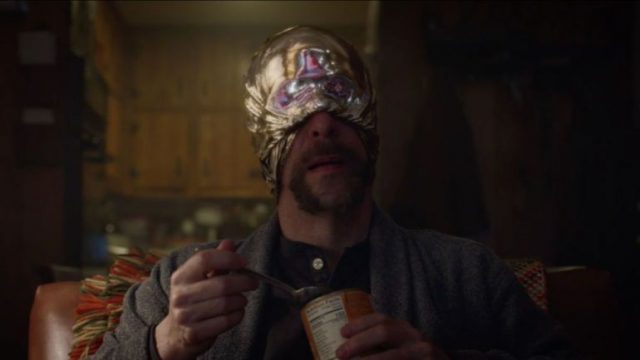 Wade’s transdimensional PTSD and anxiety runs quite deep too, well beyond reflectatine-layered clothing. He spends the early portion of the episode watching an ad which is attempting to motivate people to move back to New York, for example, which was naturally largely abandoned in the wake of 1985’s, “11/2”, the colloquial term for Veidt’s attack, which is clearly meant to serve as the Watchmen universe’s equivalent of 9/11. This explains Wade’s police cover; Being a market research expert who helps to read when focus groups are being dishonest. This presents Wade with an opportunity to seemingly lie about reactions to the New York ad, before a malfunctioning transdimensional detector later has him losing his mind on the phone, feeling highly unsafe when the alarm isn’t functioning properly. It’s actually a bit unnerving to see how psychologically frail Wade actually is, when he previously seemed like such a cool, collected character, but that’s how it goes with people in the real world sometimes too.

Wade even manages to find a surprising romance within his transdimensional anxiety support group as well, namely a new woman in attendance, who brings Wade to a dive bar, and routinely tries to seduce him. Since Wade still appears to have some loyalty to his ex-wife however, who confirms that Angela’s mysterious pills are, “Nostalgia” (literally someone’s memories in pill form, because that weird shit apparently exists in the Watchmen universe), he rejects the advances, and soon after discovers that the woman he was with is actually a member of the Seventh Kavalry. This keeps calling back to an overall theme for the episode, namely the fact that the mentally frail Wade is routinely getting scammed and tricked by the world around him, and was unable to hold on to his one real connection, his ex-wife, due to being unable to let go of his past trauma from 11/2. 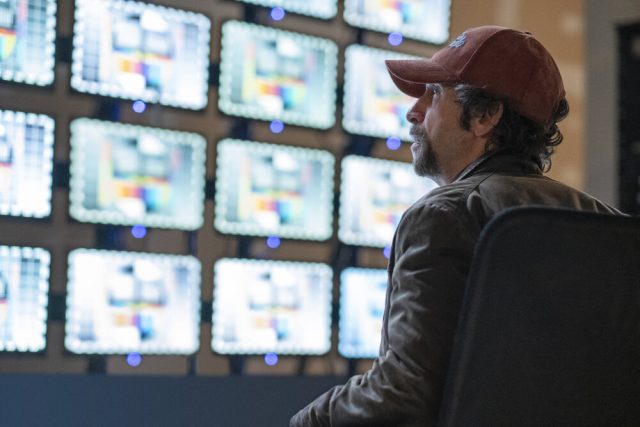 After pursuing the Seventh Kavalry woman a bit more as well, Wade even finds that the Seventh Kavalry appear to be undertaking transdimensional experiments, and that they’re headed up by none other than Senator Keene! This was a pretty good twist, considering that Keene formerly appeared to be marked for kidnapping by a Seventh Kavalry member at Judd Crawford’s funeral a few episodes back, but the explanation that Keene is leading the Seventh Kavalry to, “Keep the peace” presents a particularly interesting new moral dimension to Keene’s position, especially when the Seventh Kavalry still appears to be quite a dangerous foe to the Tulsa PD. This also apparently explains why Crawford was a Klu Klux Klan leader, which was apparently also done to keep the organization in check. It’s very clever to see the show tying this back to Veidt’s overall Machiavellian philosophy from 11/2 as well, once again exploring the idea of necessary evil for long-term good.

Oh, and speaking of Veidt, that was the cherry on top for Wade’s tendency to get tricked in this episode. It turns out that Wade was tricked three times over during his visit to the Kavalry compound, first by the woman he was with, then by Keene, and then finally, by Veidt, the actual source of Wade’s torment for decades. Keene ends up showing Wade video evidence that confirms Veidt masterminded the 11/2 attack as a hoax, simply making the world believe that transdimensional monsters would attack, and in turn, averting an imminent nuclear war between the U.S. and the Soviet Union. It turns out that Veidt even planned the appointment of Robert Redford as the new U.S. President as well, which is who the video was originally made for. Oh, and speaking of the current Veidt, he’s actually revealed to be imprisoned in a fantasy realm staged within Europa, having used his servant’s dead bodies to spell out, “SAVE ME” to the nearby Juno Satellite. This ends up being for naught however, since Veidt is quickly pulled back into his ‘prison’, and, “Arrested” by the Game Warden. We don’t currently know what this entails, but the circumstances behind Veidt’s imprisonment just keep getting more interesting, not to mention the fact that Veidt being on Europa appears to be a big hint that the, “Game Warden” could be the long-lost Dr. Manhattan!

Wade then ends up concluding this episode by remaining dependent on his transdimensional alarms and reflectatine for mental security, despite now knowing that Veidt’s attack was a hoax, dismally suggesting that Wade has seemingly learned nothing from his series of experiences, being too stuck in the past to truly move forward. This also ends up tying in to the conclusion of Angela’s minor character arc in this episode to boot, which involves Wade falsely pinning Crawford’s murder on Angela, in order to save Angela and her family from being targeted and killed by the Seventh Kavalry, but not before Angela takes those Nostalgia pills she was given by Will! This presents a great opportunity for another rewarding exploration of the past in the next episode, but that aside, “Little Fear of Lightning” delivers a fantastic examination of Looking Glass’s character and backstory, while also continuing to weave it in wonderfully into the overall themes of HBO’s Watchmen series. There may have been little emphasis on Angela and the core mystery in this episode, but the trip back to Veidt’s original 11/2 attack from the Watchmen graphic novel, and its decades-long fallout, nonetheless proved to be incredibly satisfying. Angela’s own imminent trip to the past is bound to keep bringing the events of the Watchmen graphic novel back into this series’ present-day canon as well, even from the confines of an undeserved jail cell.