The Flash has really been doing well lately, to the point where the show appears to once again be comfortable taking on some more effectively tongue-in-cheek storylines. “License to Elongate” not only bears the distinction of being directed by Caitlin/Frost actress, Danielle Panabaker, but also presents a surprisingly fun, if proudly goofy James Bond-style parody in the core storytelling, which sees Barry and Ralph take a trip to Midway City. While that’s going on, Chester finally awakens at S.T.A.R. Labs, leading to him wanting to pursue his affection for his favourite former Jitters barista. Finally, Nash finds a surprising application for Allegra in his own subplot, after supposedly finding his way to the hiding place of the Monitor.

Just about all of the storylines in this episode were pretty fun, and there’s even a note of hope for Team Flash as well, after Nash indicates that he may have a way to save Barry. This doesn’t stop Barry from continuing to prepare for his eventual demise however, namely by planning to publicly swear in Ralph as Central City’s resident superhero protector. This is the reason why Barry tags along with Ralph to Midway City, to ensure that Ralph doesn’t come to any harm, while he’s investigating a new lead on the missing Sue Dearbon. The lead naturally turns out to be a dead end, but it does place Barry and Ralph smack in the middle of a swanky party full of criminals, where the 007 parodies liberally let fly to amusing effect.

It turns out as well that the party is being used as an auction site for a new weapon that could obliterate an entire city with a satellite beam, overseen by a Bond-inspired villain named Remington Meister. No, needless to say, this character doesn’t exist in DC Comics lore. Remington is however flanked by Ultraviolet, who serves as his metahuman protector, and helps to apprehend Barry and Ralph after they’re inevitably found out. Barry and Ralph then have to break out of a meta-dampening laser trap, stop the villains, avert the destruction of Central City, and thus, all is well in the end. Even if the two didn’t find Sue, their bonding experience is pretty awesome here, as is the following ceremony to swear in Ralph as Central City’s lead superhero, which also sees the surprising commendation of CCPD’s Medal of Honor for Barry. All in all, this is a light-hearted, perfectly satisfying storyline, one that presents another fresh and fun scenario for The Flash.

The subplot at S.T.A.R. Labs also ends up being pretty enjoyable, as Chester finally awakens, and comes out of confinement. Since Chester has been declared legally dead however, he must formulate a new identity, particularly since he can’t be linked to the black hole incident from the season premiere. Apparently, Chester’s black holes even entirely destroyed CC Jitters, which is rather unfortunate, especially since Chester wants to go back to working on asking out the barista he likes. Cecile even seems strangely eager to help Chester with this task as well, with some begrudging help from Frost, since she needs to do her, “Good deed of the day.” Obviously, this doesn’t go as planned though, with Chester fumbling the attempt to ask out the barista after he makes a large coffee order, while Frost humourously utilizes the Book of Ralph to tell Cecile that her mind-reading is off. Also, since when can Cecile read minds from a great distance anyway?! 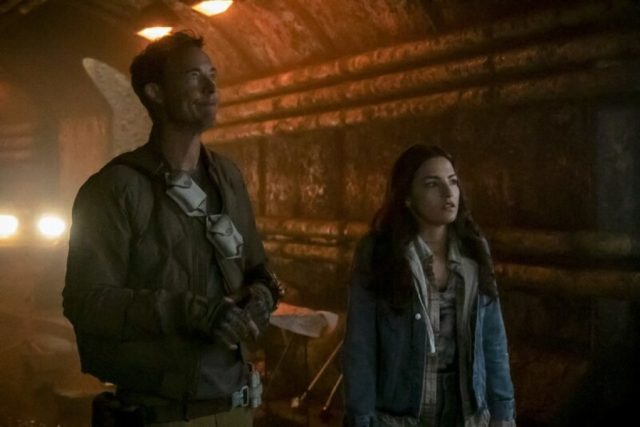 Well, whatever the case, Chester obviously makes a fool of himself after following Cecile’s botched advice, and the two are thus both forced to confront their separate failings. Cecile admits that she was trying to use Chester’s personal problems as a distraction from her anxiety in starting a metahuman law practice, while Chester admits that, even after being subsequently turned down after just being himself, he’s actually never felt better with his newfound freedom. This is a pretty heartwarming result, with Cecile finding the courage to pursue her metahuman law firm, and Chester taking the hint that he may be useful at S.T.A.R. Labs soon. I’m starting to wonder if Team Flash might actually be losing another veteran character before 2020, like Cisco, instead of Barry, after the coming Crisis on Infinite Earths crossover event, which may explain why Chester is being groomed as another hotshot scientist for the team. Then again, it’s also possible that Chester may simply end up being the one-off ace-in-the-hole against Ramsey, who knows.

The only slightly less effective storyline in this episode, albeit still a pretty good one overall, was the Nash/Allegra subplot. This was a very unlikely pairing that nonetheless felt like a solid idea, after Nash discovers that the supposed entrance to the Monitor’s hideout is layered with Eternium, which is highly explosive, unstable, and can’t be phased through by Barry. With Allegra’s powers however, Nash can light up the Eternium, and know how to dig through to the Monitor. This storyline wasn’t utilized to its full potential though. It’s the latest instance of a character’s gun-shyness being completely solved with a simple pep talk (take a shot), not to mention that there was a weird missed opportunity in addressing the fact that Ultraviolet showed up in the core Barry/Ralph storyline, yet this news never seemed to make it back to Allegra. Nash does get his path forward nonetheless though, allowing Allegra to be useful as more than Iris’ intern.

After the previous episode of The Flash sidelined Barry and Iris in favour of highlighting the supporting cast, this episode compensated with Cisco sitting it out entirely (possibly because he’s in mourning over Gypsy), and Iris once again barely showing up. Still, Barry getting a really entertaining core storyline with Ralph worked well, especially since the coming two-part midseason finale that’s airing over the next couple of weeks (excluding The Flash’s Crisis on Infinite Earths episode, which will air the week after these episodes), appears as if it’s going to be very intense and serious. Most of all though, “License to Elongate” continued to effectively utilize The Flash’s healthy new sense of wit and momentum in Season Six, delivering a series of storylines that felt both heartfelt and entertaining. Ramsey was also sidelined in this episode, though he did show up in the closing seconds, whereupon he attacks Ralph, presumably to bait Barry into a big, challenging scenario over the next two episodes. It’s awesome to see The Flash once again leading the charge for the Arrowverse this season, with a standout blend between independent storytelling and Crisis on Infinite Earths buildup, even several weeks in. Barry’s fate may continue to remain in question, but I’m nonetheless glad that the series can still so enjoyably let loose and have fun, before it really unleashes its dramatic side again.