NOTE: Full spoilers for this episode of, “Black Lightning”, including a potential major character death, are present in this review

Now that Black Lightning can start finally moving away from its overlong ‘Book of Occupation’ story pod, we can start embracing an honest effort to liberate Freeland from the ASA. The heroes yet again begin at a disadvantage however, with, “The Book of Resistance: Chapter One: Knocking on Heaven’s Door” kicking off with a poisoned and dying Anissa making her last will and testament. Obviously, this is a fake-out though, mainly serving as a device for Gambi to learn about the resurrected Khalil. While that’s going on, the rest of the Pierce family is saddled with a rather mixed batch of drama, with a few too many tired Black Lightning tropes seeping into the new story pod’s first offering.

With Tavon having been killed due to the decisions of both Jefferson and Anissa, the Pierce family once again find themselves at odds. Lynn’s increasing obsession with her job, brought on by Green Light, is also causing another rift in her marriage to Jefferson, something that comes to a head when Lynn capitulates to a surprising demand from Tobias. The implication that Tobias now knows the identity of his arch-nemesis is still being done pretty well here, with the subtle implication that Tobias is intentionally wrecking Jefferson’s and Lynn’s marriage, with Odell’s secret Green Light experiment on Lynn making that job even easier. Lynn claims to treat Tobias as a lab rat that she can use and discard at her leisure, but it’s clear that Tobias is the one thinking more clearly, considering that he’s not the person whose mind is polluted on the world’s most addictive drug. 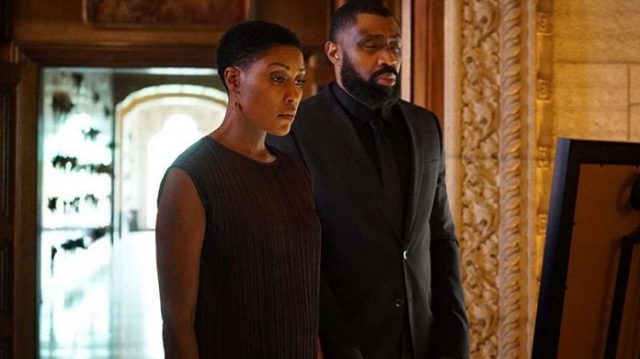 Unfortunately, this episode also has to rely on an increasingly tired CW superhero cliche with Anissa’s core storyline, namely the fact that Anissa is trying to keep her lethal poisoning a secret from her family, even when it’s glaringly obvious that she’s not well. As a result of this, Gambi tries to get to work on a cure, with Anissa begging him not to tell her family about her condition for at least twenty-four hours. The thing is though, I don’t understand why Anissa needs to be so secretive about this. All this serves to do is drive another forced wedge between Anissa and Jefferson, after Jefferson attempts to visit Anissa, only to be thrown out of the apartment. Anissa’s powers even disappear because of the poisoning, which you’d think would have some sort of effect on the efforts to resist the ASA, but nothing of the sort is ever explored, which is a big missed opportunity here. Sure, Gambi learns about Khalil through these events, but when Gambi manages to stabilize the poison towards the end of the episode, it stinks of a half-baked plot turn with Anissa that never really fully got off the ground, even as her powers still appear to be disabled.

Jennifer, meanwhile, has a rather diminished presence in this episode, only headlining a handful of scenes, wherein she breaks into Brandon’s apartment. After Jennifer finds intel suggesting that Brandon is spying on her mother, there’s a bit of a spat between the two when Brandon returns, wherein we learn the true nature of Brandon’s metahuman powers; He can manipulate the earth, including dirt, rocks and even precious metals. This explains why Brandon is able to absorb Jennifer’s electric powers without injury, and nicely positions him as a new love interest for Jennifer, since Khalil is off being an ASA asset. There’s actually a pretty nice moment shared between the two here as well, one where Brandon confesses that it’s actually Dr. Jace he’s looking into, merely using Lynn to get more answers to that effect. We even get to see Dr. Jace in this episode for once to boot, very briefly, where she confirms that Markovia is using Lynn’s research to synthesize their own metahuman-stabilizing technology. Well, I would think that’s fairly obvious.

Oh yeah, Markovia actually shows up in this episode. Remember them? The whole reason that the ASA is occupying Freeland in the first place? Even though the show does see a small boost in moving away from the ‘Book of Occupation’ pod at last, it still feels apparent that Black Lightning is way too unfocused in its third season. We’re seeing far too little of the titular superhero, who once again has most of his actions left off-screen in this episode, and while it’s cool to see that mysterious teleporting metahuman come back to the city, he only seems to be there in order to potentially kill off Odell. Oh yeah, Odell is mortally wounded in this episode, which is a legitimately good turn. After the teleporter is cornered at Club 100, an incident that Black Lightning is too late to intervene in, the Markovians get away, and Odell is seemingly fatally shot. On the one hand, I’m kind of sad that Black Lightning is potentially killing off one of its most interesting characters, barring a surprise resurrection later, a la Khalil. On the other hand though, the ASA occupation clearly isn’t doing any good for this show’s storytelling, so maybe getting rid of Odell will help refocus the plotting and deliver some more interesting conflicts for the heroes. This is of course assuming that Odell is indeed dead though, since the show is a little vague as to whether or not Odell truly succumbed to his wounds, or merely passed out after being shot.

In the end, “The Book of Resistance: Chapter One: Knocking on Heaven’s Door” still barely registers in too many respects, because it’s rehashing too much tired drama. The idea of Jamilah serving as the new voice of the rebellion under Henderson is good, but when the previous ‘voice’ is thanklessly done in off-screen, this doesn’t land with as much impact as it could have. The Markovians returning to Black Lightning in earnest meanwhile, alongside Odell potentially buying the farm because of it, is better though, as is Tobias’ efforts to manipulate Lynn, and exploit her Green Light-addled state. Lynn is at least mentally sound enough to keep Wendy’s file out of the metahuman info that she trades to Tobias, on that note, but Lynn yet again walking out on Jefferson at the end of this episode is an infuriating turn. The show has done this already! It’s not interesting! This, paired with Anissa’s poisoning having surprisingly little bearing on events, beyond an excuse for Gambi to realize that Khalil has been resurrected, gives the impression that Black Lightning is still spinning its wheels too much. The show did get a little better than it’s been over the past couple of weeks here, but it’s still too dull and unfocused at this point, even with the start of a new story pod. I’m really getting the impression that the whole ASA occupation story arc for Black Lightning is a bad idea at this stage, though hopefully with Odell now potentially being killed off, we’ll have a better chance of actually creating a real threat out of Markovia, which this season has taken a strangely long time to do.