Rick and Morty set its sights on a surprising place for Season Four’s third episode, namely the realm of heist movies. That’s at least the outward tone presented by, “One Crew Over the Crewcoo’s Morty”, a heist movie satire that sees an outlandish desire to keep topping increasingly elaborate, convoluted and yet strangely unrealistic heists. Not only does this seem to be a mockery of Hollywood’s constant desire to dress up the same blockbusters with increasingly flashy and ridiculous marketing (along with people claiming to be above this trope, yet indulging in all of these blockbuster movies anyway), but it’s a very funny idea that even appears to expand to capitalism in general, openly dressing down an economic system that tries to keep under-cutting, double-crossing and swindling its customers, and in turn resorting to increasingly elaborate means to do so, until everything eventually collapses.

After some shakier jokes and less consistent plotting during the previous episode, Rick and Morty returned to top form in, “One Crew Over the Crewcoo’s Morty”, which unfolds amid another classic Rick/Morty adventure. The Smith family returns to the background in this case, but this should be fine for longtime fans, since we haven’t really had an old-fashioned Rick/Morty adventure during Season Four so far. Said adventure begins when Rick and Morty go to loot an ancient temple, complete with, “Anti-Movie Suits” (which handily protect them from all of the contrived traps that are rigged around the buried corpse treasure), only to find that their score has already been stolen by an expert thief, Miles Knightly. This has Rick furious, and subsequently dragging Morty to confront Knighly at HeistCon, a convention for master thieves and heist experts. 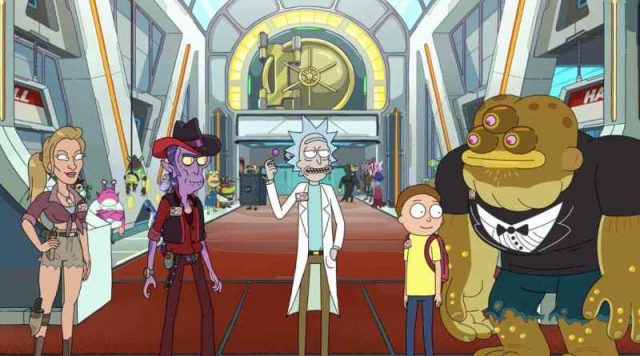 Why such a convention would exist is inexplicable, but it’s very true to the nihilistic charm of Rick and Morty, as is Rick assembling a crack team of associates to work on a, “Heist crew” with him, just to immediately ditch them as soon as he’s allowed into HeistCon. This is merely the start of an increasingly elaborate and ridiculous effort to top the same heists though, when Knightly, played in an all-too-brief guest turn by Justin Theroux, does a presentation on successful former heists, only for Rick to publicly declare him to be a fraud. This eventually has the two competing, double-crossing and triple-crossing each other in a hilarious game of unpredictably exploiting those around them (again, some noticeable capitalism-skewing themes creep out here), until Rick has eventually enslaved the entire convention, telling them to steal everything, which begins with them literally ripping Knightly apart! Needless to say, that was an unintended consequence.

Despite the horrific result of the initial competition however, Rick just keeps doubling down on the same ridiculous, increasingly destructive heist idea, eventually inventing a robot called, “Heistotron”, who is designed to execute the perfect heist. When Heistotron double-crosses and betrays Rick however, Rick once again has to assemble a crew, which includes Elon Tusk, a version of Elon Musk from a different reality, who happens to have big, monstrous teeth (and is voiced by the actual Elon Musk), and Mr. Poopybutthole, now a university professor, who has to fend off his students in a martial arts-style attack, organized by Rick, to prove Mr. Poopybutthole’s worthiness to be on his team. It’s ludicrous, but it’s very funny, not to mention that it’s just great in general to see Mr. Poopybutthole again!

The incredibly zany heist efforts of Rick, Heistotron, and another robot that Rick invents called Randotron, designed to counter and stop the contrived heists of Heistotron, all lead to a hilarious, off-the-wall Rick and Morty episode that’s constantly trying to top and outdo itself, which ironically just makes it more ridiculous and more confusing, in all the right ways. The convolution gets to such a point in fact that it eventually results in a bizarre ‘climax’ against Heistotron and Randotron alike, which eventually just culminates with the two robots exploding after a series of increasingly elaborate declarations, wherein Rick or the robots claim to have outsmarted the other parties. After this persistent, yet useless heist competition leaves a bunch of planet-scale damage in its wake, Morty is then forced to do a pitch meeting with Netflix, wherein he planned to pitch a heist movie, only to have his enthusiasm for the idea stolen. This, as it turns out, was the original heist by Rick all along, who was simply annoyed about Morty constantly talking about his heist movie screenplay, in one final darkly brilliant twist that feels so sharply true to Rick’s selfishness, while once again serving as a bit of a winking jab at some toxic Rick and Morty fans, who aggressively resist any effort to evolve the show’s storytelling.

“One Crew Over the Crewcoo’s Morty” is another gem of an episode for Rick and Morty, one that simultaneously lampoons Hollywood convention, unchecked capitalism and A.I. abuse all at once. It’s also very satisfying to have another classic-style Rick/Morty adventure, after Season Four’s first two episodes tried to mix up that formula by separating Rick and Morty into their own storylines. Sometimes, you just can’t beat a classic team-up between these two characters, even as they become entangled in increasingly elaborate and confusing plots to steal something, which ultimately amounts to nothing of value being accomplished, beyond the squelching of true creativity through Morty’s planned pitch to Netflix. It’s this kind of crazy, yet brilliant writing that Rick and Morty often delivers at its best, once again finding an excellent means of layering surprising commentary within what outwardly appears to be a bunch of random nonsense. As much as Rick’s new crews kept tripping over themselves to outdo each other, there’s just no substitute for getting the titular two-man crew of Rick and Morty back together, and I’m happy to see that Season Four is just as strong with a classic Rick/Morty pairing as it is with more distinct character positioning.

Rick and Morty 4.3: "One Crew Over the Crewcoo's Morty" Review
Rick and Morty delivers another excellently outrageous episode in, "One Crew Over the Crewcoo's Morty", which finally gives us another clever, off-the-wall classic pairing for the titular characters.
THE GOOD STUFF
THE NOT-SO-GOOD STUFF
2019-11-29
93%Overall Score
Reader Rating: (0 Votes)
0%