The Flash may have had to sacrifice a bit of storytelling momentum during last week’s episode, in order to deliver a truly fantastic payoff to the show’s two-part midseason finale storyline, but fortunately, that momentum was nicely recovered during the conclusion to said storyline this week. “The Last Temptation of Barry Allen, Pt. 2” provides a pretty awesome horror flavouring to The Flash, after Barry succumbs to Ramsey’s infection, turning Central City’s resident superhero against its terrified population. This forces Team Flash to work tirelessly at S.T.A.R. Labs to cure Barry, stop Ramsey, who has now fully embraced his ‘Bloodwork’ identity, and save the city, all with only hours left before the Monitor’s foreshadowed Crisis comes to Earth-1.

Thanks to Ramsey/Bloodwork now having control of The Flash, a gradually spreading array of Central City citizens end up becoming infected by Bloodwork, resulting in a literal horde of, “Blood Brothers” and, “Blood Sisters” that are now seeing fit to subdue anyone resisting the infection. This forces Frost and Joe to start trying to handle infected citizens on the street, with Joe insisting that the cops not use lethal force. While that’s going on, Kamilla and Cecile find themselves trapped, having to use the intense fear energy from the Blood Brothers to try and navigate around them, and escape into the city. This leaves Iris and Cisco to try and figure out a proper solution to Bloodwork, and inevitably, they disagree about how ‘Dark Flash’ should be handled, since Iris wants to do everything she can to save Barry, but Cisco believes that he’s already gone. 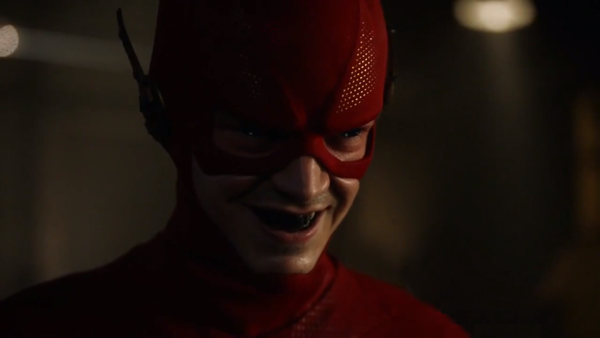 The Iris/Cisco storyline serves as a highlight in what’s overall a very strong episode to cap The Flash’s proper 2019 run on, excluding next week’s Crisis on Infinite Earths crossover episode that The Flash will be hosting next Tuesday night. Iris ends up defying Cisco’s commands to try and appeal to Barry in their apartment, only to be predictably tricked by Bloodwork, yet not killed. Soon after this, Cisco also tries to use an experimental Photon Ray weapon on Bloodwork, only for Dark Flash to stop the attack, and destroy the weapon. Once again though, Cisco is not killed. This seems contrived at first, but is actually a fairly cool turn, as Cisco and Iris both notice that Dark Flash told them seemingly cryptic lines before disappearing, and sparing them. This leads them both to realize that Barry is secretly still active within Bloodwork’s infection, and is trying to tip his team off as to how Bloodwork can be stopped!

Frost, Joe and Nash also have their hands full trying to fight off Bloodwork’s zombies, though their storylines didn’t get nearly as much rewarding development as the core Cisco/Iris conflict did. Joe ends up being injured by one of the Blood Brothers at one point, for example, only for this injury to result in a too-brief hiccup for Frost, which Caitlin quickly remedies with a pep talk (take a shot). Nash, meanwhile, has to fight off Blood Brothers while trying to get through to the Monitor’s supposed underground hiding place, but all this amounts to is filling up more runtime. The initial battles in the city’s exterior with Joe and Frost, which Allegra eventually joins, do at least provide a decent look at fighting for the city without the aid of The Flash, but they also feel like a filler storyline. The Kamilla/Cecile escape fares better, frankly, even if this subplot also just gets abruptly stopped, once the battle against Bloodwork is inevitably won.

I must say however that the solution devised by Barry is pretty awesome, especially since it makes Allegra a crucially important character, helping to justify why she’s stuck around the show since the season started. After Cisco and Iris realize that Allegra’s powers can be used to counteract Bloodwork trying to use the Particle Accelerator in order to spread his infection (seriously, how has no one disabled that thing yet?!), they keep Bloodwork and Dark Flash busy long enough so that Allegra can unleash her powers right at the moment of explosion, which cures all of the Blood Brothers and Blood Sisters in the city, as well as reverting Barry back to his normal state. This also leads into a pretty badass final duel between Barry and Ramsey, particularly when Ramsey mutates into his full-blown Bloodwork form from DC Comics lore! That’s certainly stretching The CW’s budget, and it’s a nice treat for DC fans, with the CGI effects behind Ramsey’s full Bloodwork form even being pretty decent, especially by CW standards. The duel isn’t too long, but it does have another nicely inspired ending, when Barry uses Ramsey’s own infection against him, conjuring an image of his dead mother, so that Ramsey can be trapped within Chester’s old prison, and sent off to be confined at A.R.G.U.S. I’m not sure how Lyla came and went so fast, to the point where she wasn’t even on-screen, but whatever. Ramsey is dealt with for the time being.

This sets the stage for Team Flash to stand together, reminiscing about their history and career with Barry one last time, before the skies turn red, and the Crisis arrives. All in all then, “The Last Temptation of Barry Allen, Pt. 2” provides a very cool and rewarding conclusion to the current Bloodwork story arc, delivering an exciting city-scale conflict, one that Team Flash once again has to prevail against, without Barry’s help (mostly). I’m still not personally convinced that Barry truly is marked for death, but The Flash really does seem to be pulling out all the stops to stick to that story, so perhaps anything can happen when the Crisis on Infinite Earths crossover begins next week. Regardless of what happens with Team Flash after their coming battle against the Anti-Monitor though, the show provided a very satisfying conclusion to its two-part midseason finale storyline this week, leaving room for Bloodwork to return again in the future, while also providing enough wiggle room in case The Flash really wants to reinvent itself for its 2020 episodes.