The CW’s landmark Crisis on Infinite Earths crossover event certainly culminated with some big changes for the Arrowverse after its first episode. Following Supergirl kicking off the first hour of the event during the previous night, the dawn of the Crisis saw the complete destruction of Supergirl’s Earth-38, along with the death of the original Green Arrow, Oliver Queen, who died fighting to save as many Earth-38 citizens as possible. Batwoman thus picks up with the next phase of the crossover, making a temporary move to Monday night in the process, as the heroes try to formulate a plan to stop the destruction of the Multiverse, now having to make a new stand on Earth-1.

This once again splits the heroes into several storylines, as the Monitor declares that they must now find seven, “Paragons” across various Earth’s, heroes that could save the Multiverse from the coming scourge of the Anti-Monitor. Two of the Paragons are already known to the Book of Destiny, those being Kara, the Paragon of Hope, and Sara, the Paragon of Destiny. Apparently, the Monitor controversially plucks the Book of Destiny from the time stream and uploads into a parallel Waverider to determine this, which is salvaged from Earth-74, after Sara claims that she told her crew that they didn’t have to do crossovers anymore. Apparently, on Earth-74, the Legends are retired (with at least one also being dead, mirroring the initial Legends’ shake-up on Earth-1), and the Earth-74 Mick has taken control of the Waverider, which is now run by an A.I. of the late Leonard Snart, giving Wentworth Miller an easy chance to return in spirit for this crossover event.

After the exciting kick-off to Crisis on Infinite Earths on Supergirl, it was good to see the crossover slow down a bit for its subsequent Batwoman offering, while still providing a good dose of excitement for DC fans especially. Most of this excitement is had in a core storyline with Clark, Lois and Iris, who are tasked to look for the Paragon of Truth, another Kryptonian who has apparently suffered heavy loss. This takes them across several more Earth’s, including Earth-167, which is apparently the setting of legacy CW series, Smallville. Tom Welling and Erica Durance briefly reprise their roles as Smallville’s Clark Kent and Lois Lane, respectively, and while this is a brief moment, it provides a nice bit of added closure for Smallville fans, who can now see that Smallville’s Clark had a long, fruitful and inspiring career as Superman, before retiring back to the Kent farm, and having two daughters with Lois. Even Earth-38’s Lex can’t ultimately interrupt this sweet Smallville epilogue in the end, since Smallville’s Clark gave up his powers, which results in Lex simply leaving Earth-167 after getting punched out, saying that Clark, “Took the fun out of it”, and that he should, “Enjoy his mediocrity while he can.” Michael Rosenbaum’s Lex is certainly missed here (though it is mentioned that he became the U.S. President on Earth-167), but this was more or less a perfect, albeit brief reunion with the world of Smallville, just the same.

The real draw for Superman/DC fans in this plot however is the trip to Earth-96, where Clark, Lois and Iris go to the Daily Planet in Metropolis, and meet that universe’s version of Clark, who looks just like Ray Palmer! Yes, as many Superman/DC fans suspected from the marketing, Earth-96 is the home universe of the classic Christopher Reeve-starring Superman movies, as well as 2006 movie, Superman Returns, when Brandon Routh took over the late Reeve’s role in the same canon. Apparently, Earth-96 had a ghastly off-screen tragedy at the Daily Planet as well, which was caused by The Joker gassing the building, resulting in the deaths of Earth-96’s Lois Lane, Jimmy Olsen and Perry White, among many others, conveniently explaining why other lead Superman Returns characters are not present to reprise their roles here. Nonetheless, this tragedy quickly identifies Earth-96’s Superman as the Paragon of Truth, but an intervention by Lex and the stolen Book of Destiny briefly turns Earth-96’s Superman into a hate-filled egotist, resulting in a pretty cool fight between Earth-38’s Superman and Earth-96’s Superman. Iris and Lois manage to knock out Lex and steal the Book of Destiny back though, allowing them to fix Earth-96’s Superman, and take him back to the Waverider. Earth-96 Superman even quips that it’s the second time he went crazy and fought himself, humourously referencing the infamous junkyard climax from 1983 movie, Superman III.

Another major plot in this episode involves Kara and Kate going to Earth-99 to find the Paragon of Courage, which seemingly turns out to be none other than Bruce Wayne! After a buff and dismissive Luke Fox doppelganger initially tries to prevent the two women from entering Earth-99’s Wayne Manor, they encounter an aged and broken Bruce, played in a highly satisfying guest turn by Kevin Conroy, one of the most celebrated and frequent Batman voice actors from Batman: The Animated Series, as well as the equally-celebrated Batman: Arkham video game series, among other examples. Earth-99’s Bruce is paralyzed and held together by an exoskeleton, which nicely plays with expectations, since it’s soon after revealed that Earth-99’s Bruce betrayed his code of not killing people, leading to him eventually murdering villains like the Joker, the Riddler and Mr. Freeze, as well as Earth-99’s Superman, who is apparently responsible for Bruce’s current physical state. After Bruce’s exoskeleton uses Kryptonite to neutralize Kara as well, Kate ends up killing Bruce by accident, kicking him into an electric generator, only for Bruce’s last words to be telling Kate that there’s no hope for her as Batwoman, and that the Multiverse is better off destroyed.

These two storylines provided a fantastic balance between uplifting adventure and introspective drama, which also fittingly reflect the sensibilities of the Superman Family and Batman Family characters of DC lore. The humourous little asides with the Earth-74 Mick and Earth-1 Ray are also pretty entertaining, particularly when they need to babysit the baby Jonathan, who fusses even during the Monitor’s speeches. The only storyline that felt a little weaker in this second episode for Crisis on Infinite Earths was the subplot involving Mia, Barry and Sara, who call Constantine to try and help resurrect Oliver. Honestly, this makes a lot of sense on paper, since, despite Thea having destroyed all of the Lazarus Pits on Earth-1, Constantine can help them find a parallel Earth with a functioning Lazarus Pit, which happens to be Earth-18. Earth-18 has a seemingly immortal Jonah Hex doppelganger patrolling North Carolina with the help of the Lazarus Pit, which is pretty cool in concept, but Hex is taken out far too easily by Sara and Mia, plus Oliver’s resurrection also feels weirdly uneventful. Constantine not being able to complete the resurrection process because of all of the anti-matter in the atmosphere, despite Earth-18 being seemingly unaffected by the Crisis at this point, also feels like a forced and lame explanation for why Oliver can’t just come back to life, fully lucid. As smart as it is that the heroes would rely on their knowledge of life-saving magic to try and revive Oliver, magic that already resurrected Sara on Arrow, it didn’t feel like this storyline meshed well with the others, especially when it was disappointingly dull by comparison. 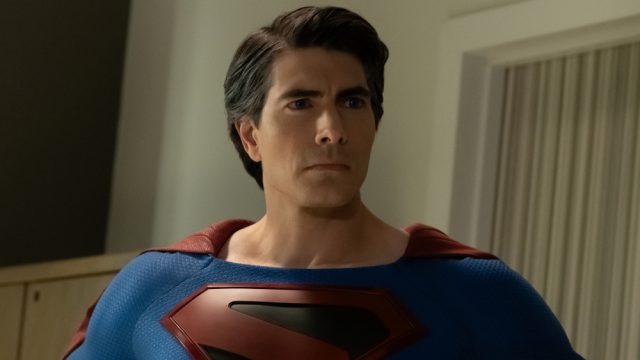 Overall though, “Crisis on Infinite Earths: Part Two” remains a very exciting and rewarding offering for DC fans and general Arrowverse enthusiasts, presenting two very strong core storylines, between the search for a new Superman that turned out to be a classic Superman, and Kate having to face one of her worst fears on Earth-99, as she meets a Bruce that’s given up on the world, and on his former code that prevented him from killing criminals. The result of Kate facing that fear of failure as Batwoman, and becoming the Paragon of Courage in the process, is pretty cool though, as is Kate getting a quick glimpse of a Beth that never turned into Alice on Earth-99 (even if Kate is dead on Earth-99, to compensate), and secretly hoarding some Kryptonite, in case she ever has to battle Kara. Despite those strong storylines though, the effort to resurrect Oliver felt like a disappointing waste of time, leaving the heroes with a bloodlust-fueled Oliver body, while Oliver’s actual soul remains lost to them. Still, there was lots to enjoy for the DC faithful in this second Crisis on Infinite Earths offering, particularly when the episode ends with Harbinger being beckoned by the Anti-Monitor, finally giving us our first look at the true threat to the Multiverse, as well as a great tease that Lyla may soon turn against her friends again, in an even worse way this time!