Black Lightning’s midseason finale initially seems like it’s going to bring the ongoing ASA occupation to a climax this week, after Jefferson and the resistance made their decisive stand at Franklin Terrace during the previous episode. The show’s final episode for 2019 ends up doing a lot more than that though, since a seemingly routine internal struggle for Jennifer is eventually interrupted by red skies and lightning over Freeland, while communication around the city becomes scrambled, and none of the citizens know what’s happening. Yes, it’s official; The CW’s Crisis on Infinite Earths crossover event has now started to make its way to Black Lightning, with, “The Book of Resistance: Chapter Four: Earth Crisis” finally linking Black Lightning to the rest of the DC shows on the network, as the alternate Earth of Black Lightning becomes threatened with destruction.

Strangely, we don’t get an official Earth designation for the Black Lightning universe, at least not in this episode, but this is nonetheless the first in-canon acknowledgment that the show does take place on its own Earth, and not Earth-1, nor Earth-38. After that’s quickly determined, the anti-matter spikes in the atmosphere then end up creating an especially unique conflict for Jennifer, when the nature of her powers makes her cells become unstable from the anti-matter, leading to Jennifer phasing in between several realities. This also has Jennifer meeting two of her doppelgangers, one called, “Gen” from Earth-1, and the other called, “Jinn” from Earth-2. These two versions of Jennifer are suffering the same affliction to some extent, though this is rather odd in the case of the Earth-1 doppelganger especially, since she doesn’t have her powers anymore. 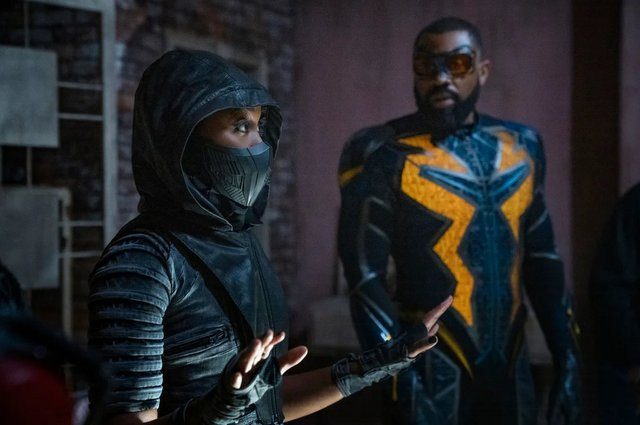 Making Jennifer the central focus of Black Lightning’s midseason finale, as well as the show’s link to Crisis on Infinite Earths and the Arrowverse at large, is a risky move, but it mostly pays off fairly well. The rest of the developments in Freeland might as well not be happening though, since they merely serve to eat up runtime during a much more interesting core conflict from Jennifer’s perspective. There’s an air of Black Lightning wanting to hastily wrap up ongoing story arcs in this episode, with Jefferson capitulating to Henderson’s demands to wipe out the entire ASA headquarters, seemingly on a whim, while Odell (he’s fine now, apparently), strikes back by sending a huge shipment of Green Light to the detainees at the ASA’s prison. It seems like all-out war is about to break out in Freeland, which would have been very promising if the Crisis hadn’t arrived, but we don’t ultimately see this battle unfold, because, as you can imagine, the anti-matter wave ends up hitting Black Lightning’s Earth before the decisive fight against the ASA is even shown. That’s predictable, but still lame.

That said, seeing Lynn, Gambi and Anissa all panic around an uncontrollably-phasing Jennifer is pretty exciting, as Black Lightning’s formerly self-contained Earth has to suddenly deal with the evidence that parallel universes do exist. Jennifer herself also gets a pretty satisfying resolution from her two doppelgangers, with Earth-1’s Gen representing a life where Jennifer sided against the ASA, and cured metahumans in Freeland, while Earth-2’s Jinn represents a life where Jennifer sided with the ASA, and became an all-powerful living weapon for Odell. It’s interesting to see that Earth-1 in particular had its own version of Freeland, Black Lightning, Thunder, the Pierce family, Odell, and the ASA the whole time, complete with their own battle against Markovia to boot. It’s a little weird that such significant events in Earth-1’s Freeland were never brought up on shows like Arrow or The Flash in that case, but I suppose this somewhat shaky retcon is the inevitable result of a show that stubbornly insisted on never interacting with The CW’s other DC shows, until this season. 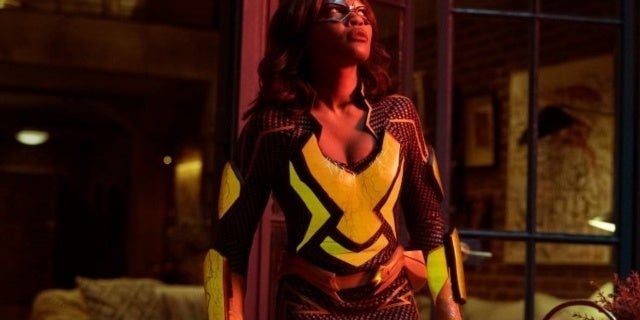 Between the two doppelganger storylines, the Jinn storyline on Earth-2 is the better one, which likely explains why Jennifer spends more time interacting with her dark doppelganger, rather than her bright one. Yes, the symbolism is laid on that thick, with the power-mad Jennifer of Earth-2 wearing black, while the self-sacrificing Jennifer of Earth-1 wears white. Regardless, Earth-2’s Jennifer, or Jinn, becomes so obsessed with being the most powerful person in Freeland that it eventually leads her to massacre every metahuman in the ASA’s camp, something that Odell ends up greatly approving of. When Earth-2’s other Pierce family members try to confront Jinn about this as well, Jinn merely kills her parents and sister in contempt, deciding that she no longer needs to be bound to her father’s limiting, idealistic philosophies. This leads to a fist-fight between Jennifer and Jinn in a trans-dimensional void, when Jennifer ends up witnessing the murders of her family’s Earth-2 doppelgangers, and is unable to stop it. Obviously though, this mess can at least be handily swept away by the destruction of Earth-2, which occurred all the way back during Arrow’s season premiere in October.

The Earth-1 storyline with ‘Gen’ meanwhile is also somewhat interesting, but it seems to create some plot holes, such as Gen appearing to be vaporized with Jinn, despite Earth-1 still standing at this point, which also somehow occurs several weeks after Earth-2 already should have been destroyed. This is no doubt another symptom of Black Lightning formerly cutting itself off completely from the Arrowverse. There’s an easy fix too, since Gen would have made more sense as an Earth-38 doppelganger, not an Earth-1 doppelganger. Regardless, on Earth-1, Gen finds a way to treat the water in Freeland, so that drinking it cures all of the metahumans in the city, including Earth-1’s Jefferson and Anissa. This also means that Earth-1’s ASA now has no weapons to use against Markovia, resulting in a furious Odell imprisoning Gen in The Pit, and taking away her powers with a dampening collar. Since Jefferson and Anissa have also been de-powered on Earth-1, they’re in turn helpless to stop Odell from coming into the Pierce family home, and shooting Jefferson’s Earth-1 doppelganger dead, as revenge for Gen stopping the ASA’s metahuman operation. This is another interesting idea, especially since Jennifer also witnessing this helps her realize that what she needs to be an ideal hero is balance, since her two doppelgangers represent both having too much power, and having too little power. This primes Jennifer for another important evolution in her journey to become Lightning, but for now, she simply ends up evaporating into anti-matter particles as the episode ends, almost immediately before the anti-matter wave finally hits Freeland, instantly vaporizing Anissa, Lynn and Gambi in the process! 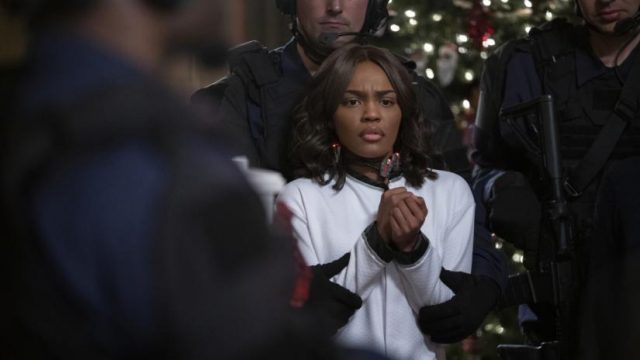 Jefferson, of course, is teleported away, likely by the Monitor, before he too can be destroyed by the anti-matter wave, allowing Black Lightning the opportunity to join The CW’s other DC heroes, who are already facing the Crisis. This begs the question of whether the solution to integrating Black Lightning characters into the Arrowverse is to simply have Jefferson replace his dead Earth-1 doppelganger after Crisis on Infinite Earths concludes, especially since Earth-1’s Freeland has apparently seen the same ASA occupation. The tease that Jennifer and her anti-matter-sensitive powers could also be the key to salvaging and/or merging universes to some extent is also pretty cool, possibly making Black Lightning’s characters the surprising trump card for The CW’s other DC heroes to wield against the Anti-Monitor, even if the formerly-unspoken presence of Freeland and the Pierce family on Earth-1 raises quite a few questions.

As you can see though, it’s the surprising Crisis on Infinite Earths connections that are the most exciting part of Black Lightning’s midseason finale this week, with every other ongoing development on the show not ultimately mattering. After all, everything on Black Lightning’s currently-unspecified Earth is seemingly destroyed by the anti-matter wave anyway, along with almost all of the show’s characters. There’s some straining in the writing to make this shocking narrative turn play out, especially when these events seemingly contradict the Arrowverse’s current Earth-1 and Earth-2 timelines, but moving this midseason finale’s spotlight onto Jennifer ends up working pretty well regardless, even though it’s Jefferson that will be the predictable ambassador for Black Lightning’s overdue linking with the Arrowverse. Jefferson and Jennifer possibly being the best heroes to actually repel the Anti-Monitor, especially with the Monitor’s recent talk of finding, “Paragons” for that battle, could be especially satisfying for Black Lightning fans who have been eagerly anticipating the day that this show’s cast can finally unite with The CW’s other DC heroes, though we’ll have to see where the resulting fallout places them, once Black Lightning returns for the rest of its current season in 2020.

Black Lightning 3.9: "The Book of Resistance: Chapter Four: Earth Crisis" Review
Black Lightning delivers a surprising and exciting narrative shift in this week's midseason finale, when the Crisis on Infinite Earths comes to Freeland, and Jennifer meets some of her doppelgangers.
THE GOOD STUFF
THE NOT-SO-GOOD STUFF
2019-12-11
80%Overall Score
Reader Rating: (0 Votes)
0%