DC Universe’s adult-oriented Harley Quinn cartoon started strong during its first episode, and it manages to keep most of that momentum going in its second. “A High Bar” properly kicks off Harley’s post-Joker adventures, now that she’s fully severed her romantic ties with the Clown Prince of Crime, and is eager to strike out as her own independent villain. This in turn brings in another key element of the series, namely Harley’s goal to find membership within the Legion of Doom, an iconic DC villain organization, one that most of Batman’s Rogues Gallery are apparently a part of in this animated universe. Harley sees her chance to do so by crashing a Legion of Doom party at the Gotham Mint, which, as it turns out, is actually a bar mitzvah for Penguin’s son, Joshua.

The emphasis on providing the foundation for the Legion of Doom in this episode means that Batman and Commissioner Gordon don’t appear, and that we instead get to meet several more villains. Chief among them is Wayne Knight’s Penguin, who doesn’t have a huge role in this episode, but still manages to provide some good chuckles, after openly admitting to forcing his criminal dreams on his awkward, geeky son. Joker, meanwhile, also ends up crashing the party, after a construction snafu comes up during his attempt to rebuild his destroyed hideout, while Poison Ivy is begrudgingly forced along with Harley as well, so she can make sure that Harley doesn’t get into too much trouble. 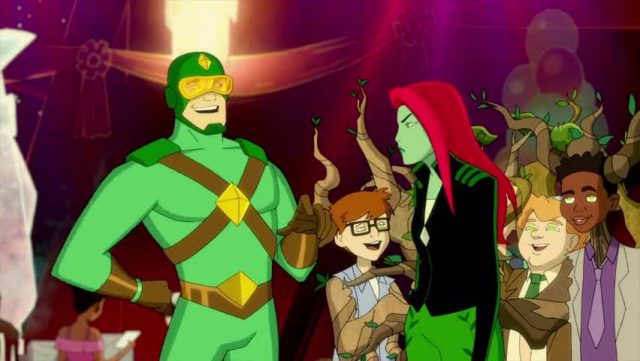 Speaking of Ivy, she also gets a pretty amusing subplot in this episode, when she starts becoming accosted by Kite Man. Kite Man’s inclusion in Harley Quinn is all too inevitable, considering that he’s one of the most mocked, regrettable villains in Batman/DC history, and sure enough, the show puts him to great use in his introduction! Matt Oberg voices Kite Man here, after previously voicing Killer Croc in the pilot episode, whereupon Kite Man keeps trying to sell Ivy on a date, flying over the Gotham City Park by night, something that Ivy naturally refuses, repeatedly. After Kite Man steals some of Ivy’s poison and accidentally turns several children into tree mutants however, Ivy is forced to go along with him to retrieve the antidote. As much as it’s a little contrived and excessively weird that Kite Man would inexplicably steal Ivy’s poison, just to give it to children, and how Ivy can only cure the children by kissing them, which isn’t much of a gag, the early chemistry between Ivy and Kite Man is surprisingly sharp. I hope that this isn’t the last we see from a potential romantic development between these characters.

As for Harley, she tries to get attention on herself by using the opportunity to show up the other villains at the bar mitzvah, which she believes will get her considered for the Legion of Doom. After comically ditching Ivy more than once (which further enables Kite Man to be a clingy creep), Harley then settles on a plan to rob the Gotham Mint, something that she’s seemingly successful at doing, after taking out the guards. I have to say as well that the show’s action felt a little tighter and more consistent here, compared to the first episode. It generally flows better, has a more consistent style, and strikes a better balance between being cartoon-ish, while still feeling pretty painful for the characters. It was also hilarious to see Harley’s ‘heist’ end with the surprise revelation that she just robbed a fake cash pile, which was originally designed for Joshua, as his, “First caper.” 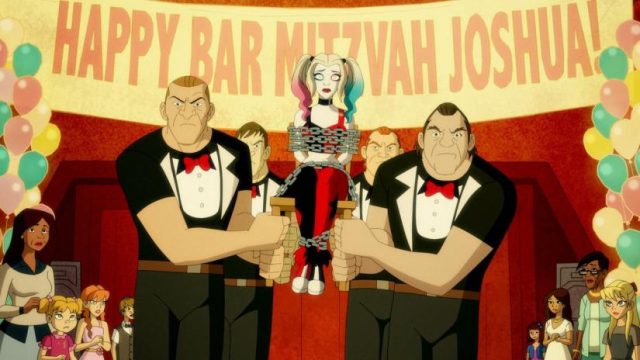 This public display of humiliation nearly gets Harley killed, as Penguin angrily ties her up, and tells Joshua to execute her with his bullet-rigged umbrella. Harley still manages a pretty cool victory here though, as she manages to make Joshua lose his nerve, shortly before Kite Man crashes in with Ivy, protecting Harley from harm. We then get another pretty enjoyable action scene to serve as a kooky climax, as Harley and Ivy battle Scarecrow and Two-Face, only for Kite Man to fail at beating a Venom-enriched Bane, very badly. This is another satisfying ‘girl power’ moment to cap off the episode, even when Kite Man proves unhelpful, and in the end, Harley and Ivy are ultimately allowed to walk away, after more construction issues prevent the Joker from finishing Harley off in Penguin’s stead.

Harley may be no closer to actually joining the Legion of Doom, but, “A High Bar” managed to keep the humour and wit behind Harley Quinn plenty strong, while balancing the tone a little more consistently. There weren’t as many shocks in this sophomore episode for DC Universe’s new adult animated series, but the laughs were still consistent and sharp enough to satisfy. The early romance between Ivy and Kite Man doesn’t initially feel like it develops very organically in the writing, by contrast, but their chemistry has a lot of promise, so I do hope that Kite Man is allowed to return later, to keep exploring this promising narrative well. I imagine that Harley Quinn will mostly focus on its titular anti-heroine’s efforts to be recognized by her fellow villains from here though, and that’s fine, since Kaley Cuoco’s Harley and Lake Bell’s Ivy remain an outstanding double act. Maybe Harley should do more research before crashing her next big event though.