NOTE: Full spoilers for this episode of, “Watchmen”, including multiple major character deaths, are present in this review

Watchmen feels like it already reached a perfect crescendo with its debut season’s penultimate episode during the previous week, but alas, we still have the season finale to try and tie the show’s many mysterious events together. “See How They Fly” doesn’t manage to achieve the awesome heights of its predecessor, but it’s still a strong, emotional and poetic conclusion to the first season of HBO’s DC drama, one that ends on a fittingly ambiguous note, without going out of its way to set up future seasons that may or may not happen. This is a bold display of restraint too, considering that Watchmen has ended up being a massive critical and audience hit for HBO, and yet despite that, the show smartly sticks to its guns in terms of focusing on one tightly-executed, self-contained season, without getting greedy with its narrative.

Speaking of that tight narrative, one of the last mysteries behind HBO’s Watchmen series is finally revealed in this season finale, namely the true origin story of Lady Trieu. It turns out, in another shocking twist, that Trieu is actually Adrian Veidt’s illegitimate daughter! Apparently, Bian, Trieu’s mother, used to be a maid for Veidt, and on the night before 11/2, she stole and artificially inseminated herself with some of Veidt’s stored sperm, before disappearing. Better still, when Trieu went all the way to Antarctica to ask for a stake in her father’s fortune in 2008, Veidt turned her away, saying that he earned all of his wealth himself, and rejected his own substantial family inheritance during decades past. Veidt then demanded that Trieu build her fortune and empire the same way. As we’ve seen, Trieu ends up successfully doing this as well, seizing control of Veidt’s company on her own merits, and using it to prepare for a grand experiment, one that appears to use the Rorschach-inspired rhetoric of the Seventh Kavalry as a front. 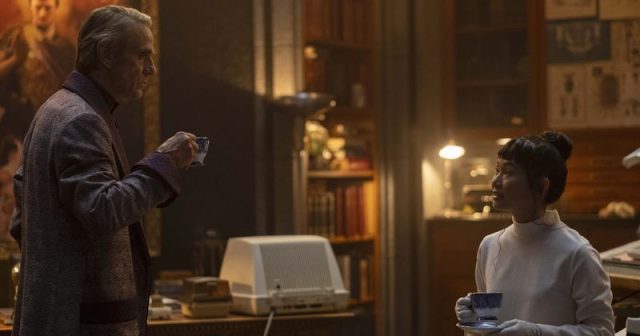 This is the point where the many story elements of HBO’s Watchmen series finally fully come together. This begins with Angela going to confront the Seventh Kavalry, just in time to witness Joe Keene Jr. preparing to transform himself into Dr. Manhattan. Angela tries and fails to warn Keene that Trieu is likely tricking the Seventh Kavalry as well, ultimately allowing them to steal her batteries and run their improvised Dr. Manhattan machine, something that Keene ultimately laughs off. It truly looks like the Seventh Kavalry has won here too, successfully stealing Dr. Manhattan’s energy with the aid of Trieu’s technology, and using it to power Keene’s transformation!… Which ends up being interrupted by Trieu and Bian, right on schedule, at which point, Trieu announces to the Seventh Kavalry that they’ve all been tricked.

This latest twist results in an especially spectacular and amazing defeat for the Seventh Kavalry, beginning when Trieu opens the atomic chamber, to reveal that Keene has burst into a huge pool of blood and gore, being horrifically killed by his own ambition, because the Seventh Kavalry didn’t know about the necessity of purifying the atomic energy that they were attempting to harness. After Jane interrupts Trieu delivering on her promise to give justice to Will Reeves as well, with Trieu declaring that she will punish the Seventh Kavalry, and by extension, Cyclops, for their white supremacy-inspired terrorism, Trieu simply disintegrates the Seventh Kavalry’s entire leadership, including Jane, and Joe Keene Sr. Just like that, the Seventh Kavalry and Cyclops are fully destroyed!… But Trieu’s intentions certainly aren’t noble either. In fact, she simply means to successfully become the next Dr. Manhattan herself now, while pledging to avoid the same mistakes as Joe Keene Jr. and the Seventh Kavalry. 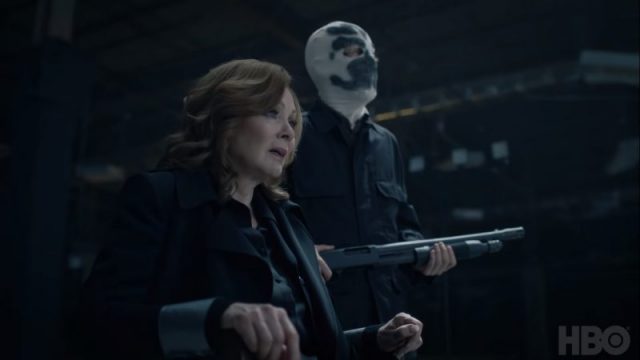 This is what HBO’s Watchmen series appears to boil down to from a narrative standpoint; The inevitable personal ruin that comes from taking it upon yourself to steer the course of humanity, and empower yourself above the greater good. This is another great expansion of the ideas behind the original Watchmen graphic novel, one that in turn provides another surprise villain for this HBO successor series’ first season finale. Right before Dr. Manhattan is successfully destroyed however, being vaporized into atomic energy through which to power Trieu’s machine, Dr. Manhattan sends Laurie, Wade and Veidt away (Veidt was also reclaimed from Europa before the demonstration, being hidden in plain sight as Trieu’s ‘statue’, with it revealed in this episode that his signal of corpses was meant for Trieu), where they land at Karnak, Veidt’s former Antarctic lair. It’s here that Veidt decides to come up with his own endgame plan to counter Trieu; Freeze the fake baby squids that he programmed to provide random atmospheric disturbances, which would in turn make them deadly weapons.

This once again makes Veidt the ironic hero of the story, despite a huge swath of destruction being inflicted over Tulsa as a result, after the frozen squids start tearing through the nearby police, including Red Scare and Pirate Jenny, while in turn destroying Trieu’s machine, which simply falls down and crushes her. Angela is warned by Blake using one of the nearby Dr. Manhattan phones though, so she’s able to shield herself from the squids, and reunite with Will in the now-destroyed silent theatre. As much as everything nicely came full circle here, the fact that Angela could so easily survive a storm that shreds through even armoured police vehicles, with just a tiny bit of debris, is rather unrealistic. Likewise, the fact that Angela didn’t even try to protect her fellow Tulsa PD officers, even at Bian’s suggestion, feels a little out-of-character. I get that the department screwed Angela, but if she could protect herself with that little hunk of metal, couldn’t she encourage the other cops to do the same? As shaky as the writing for Angela got during this climax though, the final interaction between Angela and Will is very nicely heartfelt nonetheless, as they mutually decide that they can’t heal their pain behind a mask. Angela ending the episode and the season by eating a surviving egg from the eggs she seemingly destroyed in anger as well, before an ambiguous final shot cuts away as her feet touch the water of her pool, is pretty awesome, providing a standout mix of closure for the current run of the series, while still leaving a nicely ambiguous final result. 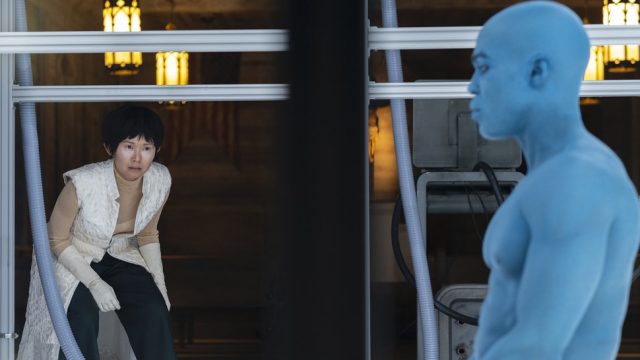 Like I said, it feels like the best turns of Watchmen’s storytelling were already spent during the previous episode, but, “See How They Fly” still served as a strong conclusion to the season, one that could just as easily function as a series finale, should no more seasons of Watchmen ultimately be made. The season’s ultimate climax and ending is sometimes a little mixed in execution, but the ironic destruction of the Seventh Kavalry and Trieu alike is pretty good, even as Angela herself takes her own potential shot at godhood, following Dr. Manhattan’s death. Wade and Laurie both using the Redford inauguration file to arrest Veidt for his actions in 1985 is also a nice bit of added resolution, providing some more closure regarding the formerly ambiguous fate of Ozymandias from the graphic novel. All told, everything is wrapped up pretty exceptionally with this season finale, though since this is such a fantastic show, I do hope that a second season is eventually made, even if it’s years down the line, and involves entirely different characters. HBO’s Watchmen series is allegedly inspired by fellow HBO drama, True Detective, after all, so it could very well follow the same model of having different anthology-style stories that unfold in the same world, with irregular production schedules. Either way though, Watchmen mostly sticks the landing with the end of its first season, cementing itself as one of the smartest, coolest and most memorable new shows of 2019, while also somehow being just as satisfying and impactful as the classic graphic novel that inspired it.

Watchmen 1.9: "See How They Fly" Review
Watchmen delivers a mostly strong conclusion to its debut season with, "See How They Fly", as both the Seventh Kavalry and Lady Trieu execute their own plans to become gods.
THE GOOD STUFF
THE NOT-SO-GOOD STUFF
2019-12-18
88%Overall Score
Reader Rating: (0 Votes)
0%