Harley Quinn appears to want to step up its social commentary in its third episode, which begins to highlight a different struggle for Harley, beyond simply being Joker’s ex-girlfriend. “So You Need a Crew?” made the very bold decision to do a satire surrounding both ends of the #MeToo movement and its fallout, after a huge public faux-pas by Wonder Woman villain, Doctor Psycho ends up igniting a huge storm of scrutiny upon the perception behind female characters in this rendition of the DC Universe. This also has the unfortunate timing of coinciding with Harley’s desire to build an independent super-villain crew, which suddenly becomes even more difficult, since no one in Gotham City wants to work for a woman.

I really have to ask at this point; Is this rampant misogyny truly a thing in Gotham City now? Perhaps I’ve also become a little worn out by the shoddy early writing of The CW’s Batwoman, which would have you believe even more that high-profile female presences get no respect in Gotham City (despite the fact that many female characters are in high positions of authority there), though to the credit of Harley Quinn, at least it manages to make that scenario more believable, helping to justify why Poison Ivy insists on working alone, and why Catwoman is one of the only high-profile Batman antagonists to not appear on the series so far. The downside however is that there are times where this episode gets a little off-message, pushing the narrative that Harley can’t build a crew simply because she’s female, when it’s supposed to be focusing on Harley struggling to build a crew because of her high-profile former dependence on the Joker for validation. Building the villain validation argument around Harley’s gender, rather than her former psychological habits, is both reductive and tiresome, not to mention that it takes away from some of this show’s edgy humour.

Fortunately, “So You Need a Crew?” still manages to hit more often than it misses when it comes to making you laugh, especially since the majority of #MeToo satire in this episode actually is pretty smart and amusing. The episode’s events properly kick off when Harley and Ivy are watching a televised battle between Wonder Woman and Doctor Psycho, which eventually leads to an injured Doctor Psycho screaming that Wonder Woman is a- Well, a not-nice term for women that rhymes with, “Runt.” Needless to say, this causes a huge public outcry, which is pretty hilarious on its own, satirizing the idea that the super-villains of the DC Universe would have unions, and a media presence, who all scramble to run damage control for the public. This is not only very funny within the context of pretending that evil people have to maintain a publicly palatable image, but also effectively mocks the ridiculous modern sensitivity of American consumers in particular, when they spend more time focusing on Doctor Psycho’s spoken misogyny, rather than his dangerous telepathic abilities.

Of course, the other end of the #MeToo movement is also nicely satirized here, not just the cycle of media posturing and ultimate inaction from heavily-ingrained public institutions, regardless of moral standing. After Harley tries to attend a motivational speaking seminar performed by eccentric Gotham City crime lord, Maxie Zeus, for example, Maxie attempts to seduce Harley as soon as she comes to his dressing room with a genuine interest in his content, eventually motivating Harley to storm out. This has a pretty awesome and cathartic payoff during the end of the episode as well, when Harley finally recruits Doctor Psycho, after the Legion of Doom fires him to save public face, another of this episode’s best jokes, alongside Clayface, who is desperate to find more work that lets him stretch his acting abilities. This gives Harley her first ragtag crew of misfit villains, and their first scheme is, naturally, a petty personal grudge, whereupon Harley steals Maxie Zeus’s gold medals, after roughing him up, and destroying some of his property. It’s childish, but it’s very true to Harley’s character, and it does feel like some funny wish fulfillment in the wake of the heartbreaking #MeToo stories that have come out in the past couple of years especially. 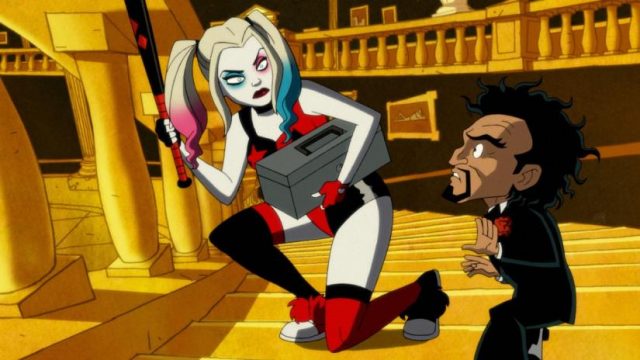 The final story element of note in this episode involves Harley paying a visit to the Queen of Fables, a more obscure DC super-villain, who allegedly took over Gotham City in the 1980’s, only to be imprisoned in a book of tax code by the Justice League. I guess this would seemingly indicate that the animated Harley Quinn universe runs on some degree of hyper-time, since Batman, Commissioner Gordon, the Joker and Harley Quinn, let alone the many other Batman villains on the show, don’t appear to have aged at all in decades. Regardless, Ivy suggests that Harley pay a visit to the Queen of Fables to learn more about female villain history in Gotham City, with the Queen of Fables now running a tax firm, go figure, along with being fittingly voiced by Wanda Sykes. The Queen of Fables doesn’t have much inspiring wisdom for Harley in the end, but she doesn’t shoot her down either, eventually witnessing Harley’s immature, but fitting revenge against Maxie Zeus on the news, at which point she experiences some renewed hope for high-profile female villains that want to menace Gotham City. It’s a little thing, but this clever Queen of Fables appearance does lead to some great jokes, while also showing that Harley is making a small difference to the disaffected female villains of Gotham City already, nicely culminating with Harley finally getting that highway named after her in the end, just like she wanted.

Even if not every element of the #MeToo satire fully landed here, “So You Need a Crew?” nicely proves nonetheless that Harley Quinn knows how to make some sharp social commentary, and doesn’t just need to devolve into silly humour for Batman/DC fans all the time. Harley successfully managing to assemble a small crew of rejected super-villains made for a satisfying result, particularly when all of the Doctor Psycho material in this episode is genuinely hilarious. It’s too bad that Ivy’s presence was minimized in this episode, by contrast, particularly when we see Kite Man punctuate another great joke in a separate scene here, but Harley still managed to hold everything up very nicely. The petty, but worthwhile victories of Harley in this episode made some of the weaker jokes worth it too, especially when so much great humour is still injected throughout the episode, even when it tries to layer in some more relatable themes surrounding the lingering struggles of female empowerment in the modern world. Harley still has a long way to go as an independent super-villain in this animated universe, but she’s starting to get some unlikely friends, and if nothing else, her small successes have at least cost the Joker another perfectly good TV.