NOTE: Full spoilers for this episode of, “The Mandalorian”, including the true name of the titular character, and a major character death, are present in this review

The Mandalorian’s first season finale begins on a very exciting note, with the show’s heroes being cornered by the newly-revealed Moff Gideon, the surprise arch-villain of the season. “Chapter 8: Redemption” is thus teed up for a hell of a finish to The Mandalorian’s debut season, and it fortunately doesn’t disappoint! The Mandalorian manages to bring its first wave of story developments to a very satisfying close here, presenting a ton of high-quality action, along with a fittingly emotional payoff, as Mando and his buddies have to try and find a way to escape the gaze of Moff Gideon, and get the Child off of Nevarro.

Before that can be done however, a huge bombshell ends up being dropped on the characters, which is just one of several ways that Giancarlo Esposito’s Moff Gideon immediately makes a striking impression as an antagonist. It turns out that Gideon not only knows the identities and histories of Cara and Karga, but also of the Mandalorian himself, including his real name! As it turns out, the Mandalorian’s actual name is Din Djarin, a name that actor, Pedro Pascal let slip back in October. It’s also at this point that we officially learn Djarin wasn’t born a Mandalorian, and was adopted into the creed, after the bounty hunters of Mandalore ended up rescuing him from an Imperial purge on his home planet, following Djarin’s parents being killed by Imperial droids. This also likely explains why Djarin harbours such a hatred of droids, considering that it was droids that destroyed his birth home, and killed his parents. 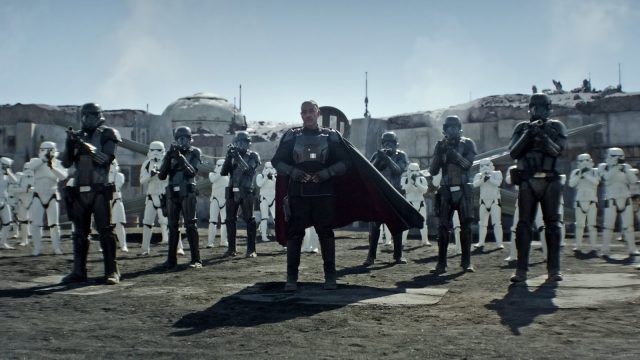 Amid so much drama and emotion with the heroes however, a particularly surprising element to, “Chapter 8: Redemption” is how surprisingly fun and humourous it can be too. The episode begins with a surprisingly hilarious introduction to the two Stormtroopers that snatched the Child at the end of the previous episode, for example, played by Jason Sudeikis and Adam Pally, who have a Tarantino-esque conversation involving what Moff Gideon may want with the Child, before amusingly struggling to hit a ground target with their blasters. Even the initial bailout of the heroes by IG-11 is pretty funny, as IG-11 bursts onto the scene after taking the Child back from Gideon’s Stormtroopers, declaring that he will protect the Child from harm. Yeah, it’s a little unbelievable that IG-11 wouldn’t book it back to the Razor Crest, and keep the Child as far away from Djarin and his now-trapped party of heroes as possible, but the humour and action surrounding IG-11’s attack, alongside IG-11 being a very integral plot device in this episode, makes this weird lapse in programming pretty forgivable from a narrative standpoint.

In fact, the surprising narrative weak link in this season finale is actually Djarin himself, with the revelation of the character’s name and face probably being the best that his storyline delivers here. Yes, we finally see Pedro Pascal’s face underneath that slick Mandalorian helmet in this episode, after IG-11 is forced to remove Djarin’s helmet, in order to heal injuries sustained during the shootout with Gideon’s Stormtroopers within the first (awesome) major action sequence of this episode. Initially, Djarin insists on telling Cara and Karga to leave him, since his injuries are fatal, he can’t remove his helmet around other living beings, thus preventing medical intervention, and the Child must be protected from Gideon at all costs. IG-11 presents the interesting loophole of not being an actual living thing though, so IG-11 looking upon Djarin’s face doesn’t actually violate the code of Mandalore, allowing IG-11 to heal Djarin’s injuries, and eventually allow him to rejoin his friends in the sewers.

This ultimate act of redemption from IG-11 leads nicely into another great surprise within this season finale, after a brief visit to the Armorer, who apparently survives a Mandalorian purge that occurred off-screen, in the wake of the Mandalorians revealing their presence in order to make an escape for Djarin several episodes ago. The visit to the Armorer isn’t enormously fruitful for the characters, beyond spelling out the story foundation for The Mandalorian’s upcoming second season, and presenting Djarin with a jetpack that might as well have ‘Deus Ex Machina’ branded on it, but it’s good to know that someone survived the Imperials’ latest bout of Mandalorian serial killing, especially when the Armorer gets a chance to kick some ass in her own right. Back to the point though, after Djarin’s group ends up making it to a lava river that can take them to safety, they end up being cornered by Stormtroopers anyway. This is when IG-11 chooses to sacrifice himself, willingly walking into the Stormtroopers’ radius, which causes him to violently self-destruct, and take out the entire squadron, since his old bounty droid protocol prevents him from being captured. As sad as it is to see Taika Waititi already leaving the series (especially since Waititi actually directed this season finale, on top of reprising his voiceover role as IG-11 again), IG-11’s big sacrifice was pretty cool, particularly when it finally forced Djarin to see that maybe some droids aren’t so bad. Maybe.

There’s still time for a standout climax in an already awesome season finale at this point though, after Gideon ends up attacking Djarin’s remaining group with his TIE Fighter, resulting in Djarin making use of his recently-acquired jetpack. The Armorer warned Djarin previously that the jetpack won’t obey his commands until he properly trains with it, but that proves to be another non-issue, in a weird bit of weak writing with Djarin himself here, so I’m not sure why the show even bothered to bring that up. Still, the climactic confrontation with Gideon is pretty great, after Djarin jets up to sabotage Gideon’s TIE Fighter, having to hang on and dodge countermeasures, until he can finally disable the TIE Fighter in mid-air. It’s a very thrilling battle, and one that Djarin is ultimately successful in, since the TIE Fighter ends up crashing in the distance, with Djarin managing to make himself land afterward. Gideon ends up surviving the crash in the end, as revealed in an epilogue scene, but that’s a very good thing. It would be a shame if The Mandalorian wasted such a promising arch-villain by killing Gideon off almost as soon as he was introduced. 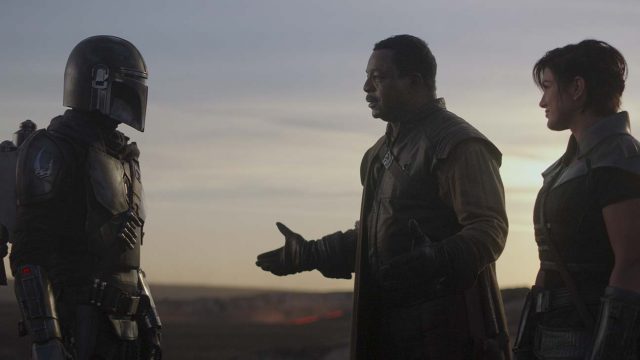 The fact that the writing gets a little contrived with Mando-er, Djarin, is the only blemish on what’s otherwise a pretty superb ending to The Mandalorian’s first season. “Chapter 8: Redemption” delivers a high-quality blend of action, drama and humour, managing to make some legitimately funny self-aware jokes about The Mandalorian itself, along with the Star Wars franchise at large, while also exceptionally concluding the current story direction of the show’s debut season. Cara and Karga staying behind on Nevarro is a little bittersweet, as was IG-11’s noble self-destruction for the cause, and Djarin making a quick grave for the fallen Kuiil (yes, he’s confirmed dead here), but hopefully Gideon surviving his TIE Fighter crash means that Djarin will have a more impressive villain chasing him when The Mandalorian returns for its second season next Fall. Even if not every storyline from this first season was a winner, The Mandalorian did at least stick the landing beautifully with its first season finale, helping Disney+’s original genre series offerings start very strong out of the gate!

The Mandalorian 1.8: "Chapter 8: Redemption" Review
The Mandalorian concludes its debut season on a fun, action-packed and emotional note with, "Chapter 8: Redemption", as the eponymous character's identity is finally revealed, and Moff Gideon goes to extreme measures to reclaim the Child.
THE GOOD STUFF
THE NOT-SO-GOOD STUFF
2019-12-28
92%Overall Score
Reader Rating: (0 Votes)
0%