Now that the supporting cast of Harley Quinn is beginning to become more fleshed out, “Finding Mr. Right” seemed to have the series settling into a more familiar groove. There was still time to add another new addition to the ranks of Harley’s crew however, as another Powerless alum, Ron Funches joins the show as King Shark in this episode, whom Clayface hires in an effort to boost the crew’s dismal social media presence. All the while, Harley continues to ignore the level-headed advice of Poison Ivy, which becomes a particular problem once Harley tries and fails to court Batman as a nemesis, in turn leading to an embarrassing twist that only makes her reputation worse.

After some very impressive comedic momentum so far, the humour of Harley Quinn became a little bit more predictable in this episode, consisting largely of expected jokes surrounding social media, modern dating habits, and fake news. The narrative themes behind the episode still ring true however, particularly when Harley steals the Batmobile in an effort to get Batman’s attention, only to instead be targeted by Robin, since Batman doesn’t have time to waste on Harley’s crew. This is actually a really funny idea, particularly since Jacob Tremblay’s Robin truly is adorable, in turn winning over the hearts of Gotham City through fictional local talk show, Tawny, though he does so by lying about Harley accepting him as a nemesis. This definitely feels like a tongue-in-cheek reference to the dichotomy of sexual fallout between men and women, framed through finding a ‘special’ nemesis, which is made all the more comically uncomfortable when Robin is a child.

Like I said though, the humour gets a little more predictable here, so this clever idea with Robin isn’t all it could have been. There’s even a section with Superman and Lois Lane about midway through the episode that falls kind of flat, after Harley takes Lois hostage, in an effort to similarly try and fail to bait Superman as a new arch-nemesis. I get that this is a cartoon, and it can easily skip over how Harley and her friends get to Metropolis without raising suspicion (not to mention how Harley so easily walks in and out of the Bat Cave, apparently), but disappointingly little is done with Harley and her crew somehow taking a trip to Metropolis over a newspaper article that Lois writes, jeering at Harley for her encounter with Robin. Maybe Superman and Lois will have a better role later in the series, but when the punch line in their debut here is that they get sushi together, I’m not really sure what the joke is supposed to accomplish. It just feels kind of random.

Fortunately, the payoff of this episode is nonetheless worth it, after Harley kidnaps Robin (is Batman’s security really this crappy in the Harley Quinn universe?!), and tricks him into admitting on live television that he lied about his battle with her, by suspending him over King Shark as a ‘trap’. This staged trap goes awry however, when a nosebleed from Robin ends up turning King Shark into a crazed monster, resulting in a huge brawl between King Shark, Harley, Batman and Poison Ivy, which the Joker also eventually intervenes in, after he notices that Batman has stopped paying attention to him. This at least creates an exciting conclusion to the episode, as this very public punch-up basically results in a re-balance for Harley’s reputation, at the cost of her once again getting nowhere as a budding criminal mastermind. Still, at least King Shark is added to her crew in the end, which it felt like this episode was mostly set up to establish anyway. 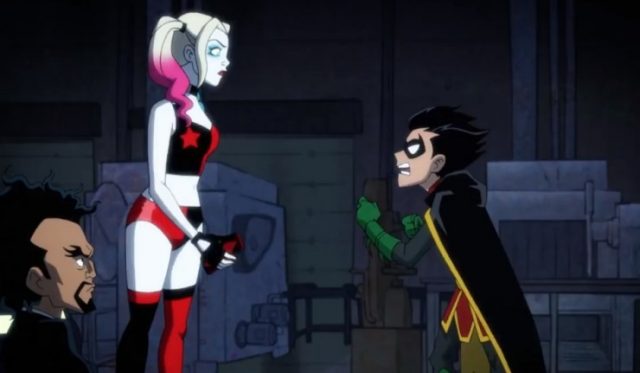 Oh, and we also get introduced to Ivy’s elderly, vaguely racist landlord in this episode, Sy Borgman, a character who does exist in DC Comics lore, as a more recent addition to Harley Quinn’s standalone comic books. Jason Alexander’s Sy is pretty funny too, being a big bright spot in an episode that doesn’t have quite as much comedic momentum as the prior three. Still, Ivy finally being evicted by Sy over the antics of Harley and her friends should set up a promising payoff for the next episode (which actually aired on the same week as this one for us Canadians!), particularly since the Robin thing doesn’t seem like it ultimately went anywhere.

“Finding Mr. Right” isn’t quite all it could have been, but it still has some solid inspiration behind the humour and themes, even if the actual gags are a little more hit-or-miss this time around. I’m glad to see that Harley Quinn is actually using Batman pretty sparingly at this point, keeping the focus wisely on the titular character and her struggling crew of B-list baddies. The comically adorable first impression of Robin works pretty well too, creating another lovable caricature of one of Gotham City’s usual heroes. It’s a shame that the jokes got more predictable here though, not always making the most of the episode’s ideas, especially when it sometimes seems confused about exactly what it wants to say with the brief, but very public Harley/Robin feud. Still, Harley and Ivy now having to find a new home should present another inspired opportunity for the show to go to some fresh territory, and Canadians don’t even have to wait an additional week to see how that ultimately pans out.