Harley Quinn may have seen a small comedic stumble in its fourth episode, but fortunately for us Canadian viewers, a better fifth episode follows it immediately afterward. “Being Harley Quinn” puts the story focus entirely on the title character this time, with her crew being roped along on a rather unique mission, after Harley becomes catatonic due to a mental breakdown. This has almost the entire episode set within Harley’s mind, as Doctor Psycho brings the crew into it in an effort to restore Harley to lucidity. While that’s going on however, Sy Borgman catches the crew dirtying the apartment, and decides to call in some old favours in order to deal with the situation as messily as possible.

The humour tightened significantly in this episode, and that’s due largely to the inspired idea to base an episode almost entirely within Harley’s mind. Here, we get a first-hand look at Harley’s twisted psychology, confirming details such as the fact that she was always a borderline psychopath in the Harley Quinn universe, right from childhood. This might not sit right with some DC fans, since it takes away from the examination of Harley being a victim of abuse and manipulation at the hands of the Joker, and indeed, this is the one point in the episode that doesn’t feel well executed. This is especially exemplified in a rather weak narrative payoff to the trip into Harley’s psyche, even if the surrounding jokes are at least fairly strong.

Sy also creates an interesting, and amusing ticking clock during this dive into Harley’s mind, since he believes that Harley and her entire crew have died, on account of all of them being in a catatonic state in the real world. Sy’s response to this is to call in an old spy contact, because I guess Sy was a spy in his former life (go figure), and get her to help him dispose of the bodies, which they plan to do in an old pizza oven within a mall property that Sy somehow owns. Again, this is a cartoon, so it’s easy to overlook the ton of questions that this raises, but regardless, what makes this subplot work so well, despite its silly core premise, is that it’s just really funny and well-written. The randomness is left to just the right degree here, and the quick peek into Sy’s former history with his old partner is something that’s often amusing to hear about, with most of it fittingly left up to viewers’ imaginations, outside of some very funny details.

Meanwhile, within Harley’s mind, everyone’s psychic projection makes contact with Harley, who is trapped within her own memories. One such memory is also glitching to boot, namely the one wherein Harley recalls jumping into the chemical vat at Ace Chemical, claiming that the Joker pushed her in. The actual pushing can’t be seen however, and when Harley tries to access it, her mind activates its defenses, sending several childhood Harley’s at the crew. From here, the exploration into Harley’s mind deftly balances excitement and humour, with trips into Harley’s Joker-filled subconscious, along with an eleven-year-old Frankie Muniz (voiced by Muniz himself!) bailing the group out from the initial wave of young Harley’s, all providing lots of good jokes and story turns. 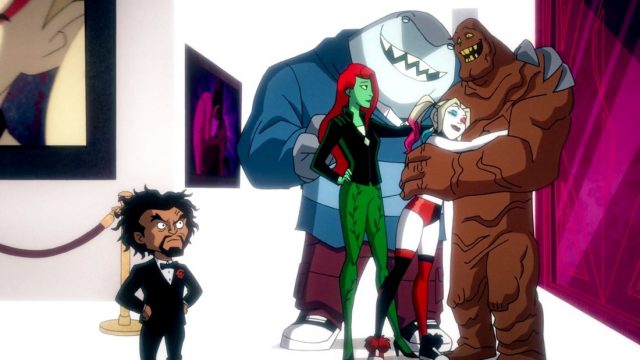 Again though, the payoff to all of this is a bit of a let-down, especially for avid Batman/DC fans, who will see it coming a mile away. This might be forgivable if Harley Quinn wasn’t being distributed primarily on a streaming platform made specifically FOR DC fans, at least in its native U.S., but I suppose in Canada it’s not quite as bad. Harley Quinn is an Adult Swim show here in the Great White North, so channel surfers can reasonably and randomly stumble on the show in Canada’s case. Regardless, after Harley and Ivy take a trip into Harley’s repressed memories, they discover that the memory of Harley’s so-called ‘origin’ is glitched because Harley jumped into the chemicals voluntarily, and simply convinced herself that the Joker forced her to jump. Well, duh! Even non-fans of DC could probably put this together very easily, deflating a key moment for Harley’s character that really should be bigger than it is.

Still, “Being Harley Quinn” at least excels in the humour department, with the trip into Harley’s mind being just as twisted, amusing and unpredictable as you would hope. It’s also pretty satisfying to have Sy be welcomed into Harley’s crew at the end of the episode, right after Harley adopts Sy’s old abandoned mall as her new lair. This makes for a lot of good forward movement for Harley’s character, even if the final ‘twist’ behind Harley’s supposed villain origin is too predictable. It is nice to see Harley Quinn’s jokes return to top form here though, and in the end, that makes for a considerably better episode than what the show delivered previously. Harley’s crew continues to fill out even now to boot, though I hope that she slows down a bit with gathering henchmen after this. Harley already has a lot of kooky characters in her eccentric employ at this point, and it would be irksome if the show’s lead cast started to get too bloated from here.