After a bold, unpredictable and undeniably divisive start to the newly-female Thirteenth Doctor’s debut last season, one that mostly focused on new franchise conventions and new alien threats, Series Twelve of Doctor Who kicks off with a two-part season premiere, one that once again provides a distinct adventure to inspired effect. “Spyfall, Part 1” starts the season off with a bang, as a group of international agents are attacked by mysterious energy beings, while performing various feats of spycraft around the world. This motivates MI6 head, C, played in an all-too-brief guest turn by Stephen Fry, to recruit the Doctor and her companions, with Earth’s intelligence agencies being mystified as to what kind of threat they’re up against.

With UNIT and Torchwood having become seemingly defunct at this point in Doctor Who lore (which is even directly mentioned in this episode), inserting MI6 as a successor makes some degree of sense. It also invites the series to do a surprisingly effective James Bond-style parody storyline, albeit one still layered within a smart, shocking and highly satisfying new conflict for the Thirteenth Doctor and her crew. The excitement is consistently strong throughout this episode, beginning with the mysterious energy aliens attacking and killing the escort driver while the Doctor and her companions are headed to MI6, resulting in a heated confrontation with C that eventually gives way to a startling revelation; All of the attacked agents have had their DNA completely rewritten, and essentially no longer exist as human. 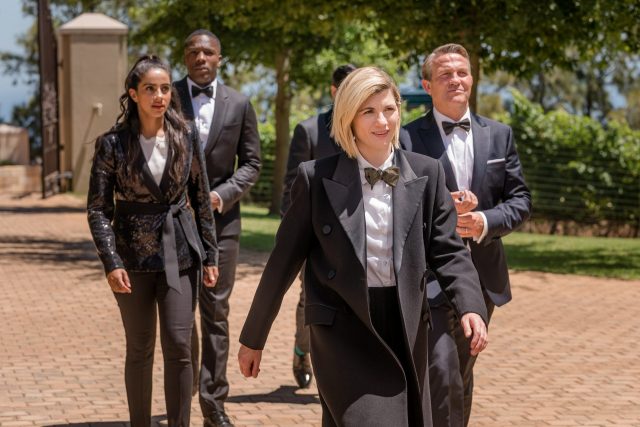 This provides a good opportunity to split up the companions between two separate storylines, as the Doctor and Graham go to make contact with an old spy ally of the Doctor’s, O, while Yas and Ryan pose as journalists in order to investigate a suspicious tech mogul, Daniel Barton, who apparently heads up a Google-esque company called Vor. Both of these storylines are pretty thrilling as well, with the mysterious energy-based aliens quickly being revealed as being in league with Barton, who handily gives Yas and Ryan an invitation to his birthday party the following day, after ducking out of a fake interview early. This doesn’t go off completely without a hitch though, since Yas ends up temporarily being stuck in a mysterious realm of nothingness, before she ends up warped back to the Doctor, Graham and O. Does this mean that Yas is now a sleeper agent?

Regardless, the way that the show both parodied and embraced spycraft tropes with its initial Series Twelve mystery is pretty awesome, with a grand conspiracy being hinted at as the Doctor decodes alien spycraft, which naturally has global implications for Earth. It’s a little disappointing that the show barely made use of Stephen Fry here, whose C is quickly killed off (or so it appears), before the Doctor and her companions initially escape an ambush at MI6, but despite that, the new character of O is comparably likable and intriguing. The budding romance he seems to develop with Yas is also fairly promising at first blush, even though Yas’ sister wanting Ryan’s phone number isn’t really registering as much of a hook at this point. Perhaps it’s a tease for a key storyline later in the season? 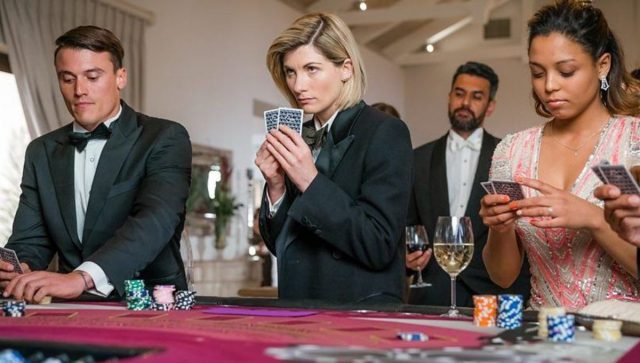 In any case, after cutely changing into some 007-themed gear, the Doctor’s crew, along with O, infiltrates Barton’s party, where they naturally stand out like a sore thumb, before the Doctor fails to get any serious intel out of Barton. Yeah, it’s silly, but like I said, the spy satire is just as sharp as the storytelling, so this tomfoolery only makes an entertaining episode all the better. It even ends with a nicely tongue-in-cheek motorcycle chase, before Barton attempts to flee on one of his many jets. The Doctor and her allies manage to stow away on board afterward, but this doesn’t end up mattering much, since O quickly becomes suspicious to the Doctor at this point, contradicting his file when struggling to sprint to the plane, when his MI6 dossier claimed that he was an expert sprinter. Inevitably then, it turns out that O isn’t who he says he is, and I have to admit that the entire red herring that this episode built itself around was executed brilliantly, with O being the true mastermind behind the energy aliens, while Barton is merely a pawn.

Oh, but it gets even better for Doctor Who fans! Not only is O a fake, but he also happens to be the real alien spymaster, with emphasis on the word ‘master’! Yes, in a pretty amazing twist, O was actually the Doctor’s Time Lord arch-nemesis, the Master the whole time, once again reborn, and in the guise of a new identity! The Master being found out by such a weak turn is a bit of a let-down (surely, he could have kept the ruse going a bit longer!), but the show’s sleight-of-hand with the Master’s new reveal is nonetheless pretty awesome, especially when it plays with expectations in regards to the fact that the previous Series Eleven consisted pretty much entirely of all-new alien foes, and that the Master once again appeared to be neutralized for good around the conclusion of the Twelfth Doctor’s tenure, with his backwards timeline once again being fully locked. As usual though, the Master keeps cheating death, and inevitably returning to menace the Doctor again, with the episode ending as the Master warps away, leaving the Doctor and her friends stuck on the jet with a bomb, shortly before they seemingly end up in the same dark dimension that Yas was briefly stuck in. 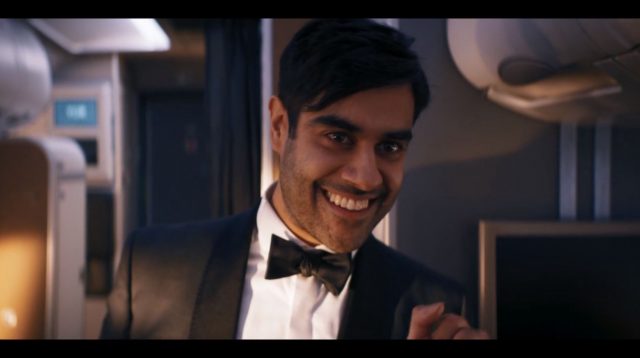 This is a fantastic cliffhanger to lead into the latter half of this two-part storyline, with the Doctor and her allies not being dead, but nonetheless being stuck in another dimension, while the Master goes to work once again wreaking havoc on Earth. “Spyfall, Part 1” is not only a superb Doctor Who episode on its own merits, but it also seems to indicate an increased dedication to embracing more established elements of Doctor Who lore in Series Twelve, after Series Eleven pretty much entirely shirked familiar Doctor Who villains and story threads, excluding the new Dalek strain that was featured in last year’s New Years Special. Perhaps this means that Series Twelve will better balance new and classic Doctor Who sensibilities in equal measure, now that the establishment for the Thirteenth Doctor and her companions is out of the way. Either way though, I’m officially hooked from the jump, and I’m especially happy to have the Master back on the show in a new guise. As usual, his first impression in his latest identity doesn’t disappoint!

Doctor Who 12.1: "Spyfall, Part 1" Review
Doctor Who kicks off Series Twelve on a fun, thrilling and thoroughly excellent note in, "Spyfall, Part 1", as the Doctor and her crew are rounded up by MI6 to stop a mysterious alien threat.
THE GOOD STUFF
THE NOT-SO-GOOD STUFF
2020-01-13
91%Overall Score
Reader Rating: (0 Votes)
0%