Hoo boy, Doctor Who is going full activist this week. “Orphan 55” follows up Series Twelve’s epic two-part season premiere storyline with an episode urgently themed around the real-world climate crisis, trying to blend those themes with a traditional take on otherworldly Doctor Who storytelling, complete with a lot of claustrophobic planet exploration in what initially seems like an intriguing setting. That’s all well and good on paper, but unfortunately, “Orphan 55” squanders its message and sentiments by being noticeably poorly directed, and even more poorly written, ultimately undermining its own noble ambitions by over-egging the pudding with an overly convoluted plot and some laughably terrible character turns.

As much as I’ve tried to somewhat defend the new Chris Chibnall era of Doctor Who from some overzealous fans that seem actively determined to reject it on principle, since it does have some pretty good storylines, and can’t be written off in its entirety for that, I do nonetheless have to admit that this episode does validate a lot of fans’ fears when it comes to the overly-politicized new direction of the show. Not that having an urgent message about climate change is bad, of course, and it can fit into Doctor Who nicely, especially since the show has had environmental-themed episodes since even the Classic Who era. That said, their effectiveness is contingent on the episode telling a good storyline around the themes. Therein lies the rub– This is not a well-written Doctor Who episode, and that makes its noble intentions almost completely fall apart. This is before considering that some will inevitably disagree with the episode’s vision of an Earth that’s ruined by war resulting from mass, climate-induced exodus in the near future (conveniently, the exact date is never specified, so this could be the far-flung future for all I know), especially when it seems to fly in the face of dozens of other Doctor Who episodes that seem to indicate that Earth and humanity ultimately turn out to be fine in the future. Yes, I know that time is always in flux, but if there’s been one constant in the Doctor Who universe, it’s the fact that humanity is never wiped out, and always seems to prevail, no matter what crisis faces them.

So, yes, the big twist in, “Orphan 55”, well, one of them, is the fact that the titular planet’s main resort destination, Tranquility, which the episode is set upon, is actually a ruined future Earth that’s created a fake vacation hotel spa, in an effort to raise money to terraform the planet and restart civilization. Except the person trying to do that is seen as a villain and chastised for some reason, even though using a legitimate business to heal the planet, while simultaneously providing a healthy and happy vacation spot for people around the solar system, sounds like a pretty damn good public service on multiple levels, honestly. Is it because the person trying to do this is profiting from it? If so, that’s a stupid reason to demonize them. Just because you’re profiting from something noble doesn’t mean your intentions are bad, or that you’re a bad person. What kind of moon logic is that?! By that ‘wisdom’, every single person who runs a successful business of any scale, or, hell, is employed in general (including the cast and crew of this episode and this show), is a criminal that’s hurting the Earth, even when it’s already dead? What? Maybe the idea is that humanity shouldn’t have let Earth die in the first place, only to try and replace it, but if that’s the message, it’s delivered very clumsily, to the point where even the Doctor herself seems confused about whether or not to actually lecture the hotel owner on it.

Compounding the frustration with this episode’s otherwise well-intentioned message is the fact that a lot of the characters are really annoying throughout this storyline, even the show’s current leads! The Doctor’s attitude seems to change on a dime too much within scenes, the goofy companion humour is way too over-the-top, to the point where it feels like this episode is practically aiming itself at six-year-olds (despite the barbed climate change message), and too much of the storytelling seems to keep being pushed forward by characters unrealistically acting stupid, which is always a telltale sign of bad writing. The plot properly gets going in fact because the characters moronically charge into the territory of the enemy monsters-of-the-week, the Dregs, who are mutated humans that now breathe carbon dioxide and expel oxygen, yet are somehow unintelligent and vicious (this doesn’t make sense on multiple levels, but it’s Doctor Who, so, whatever), because a senior citizen was lost, and his wife wants to go and get him. Oh, and the wife won’t stop screaming for the guy, as a convenient excuse to alert the monsters, Jurassic Park III-style, and both of them die anyway, so this entire mission is idiotic and pointless. The characters should have teleported off of the planet immediately, and the only reason why they don’t is because we need to fill the runtime. 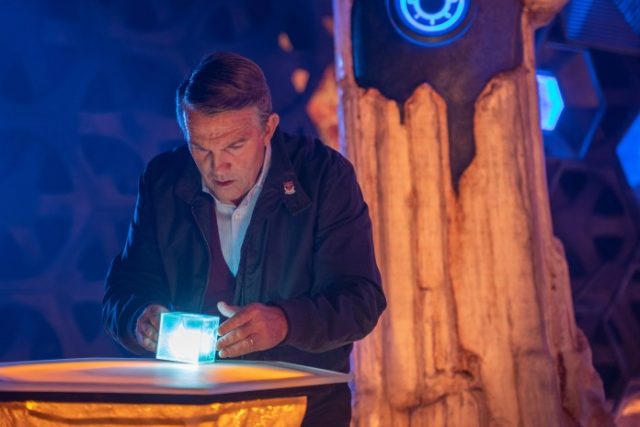 On the bright side, there are some good ideas that squeak through. The Dregs themselves are really cool monsters in concept, and had they not contorted themselves into being mutated humans based on a ruined Earth, they would have made for a really strong threat in another, better-written Doctor Who episode. Likewise, a resort planet being built around hostile territory for a quick buck could have been a good problem-of-the-week, if it didn’t try and work in the rejuvenation and terraforming angle, which ironically turns the supposed crooked person into a good person, thus defeating the point of that conflict. That’s not even the worst part either! Apparently, the Dregs get in to the resort in the first place because the hotel owner’s unemployed daughter (is this self-parody? Because it feels like it), is going to blow up the resort after lowering its defenses, because the manager didn’t pay enough attention to her when she was younger. That’s not a joke. That’s the actual motivation behind the terrorist plot in this episode, the one that leaves numerous innocent people dead, and yet, this woman is somehow framed as a hero in the end, because she stays to fight aliens with her mother. That’s even worse than stupid. That’s downright insulting to the intelligence of viewers. You don’t get hero points for cleaning up a mess that you, yourself made, especially when that mess led to the deaths of however many innocent customers!

This all amounts to an episode that tries to do way too much, has no idea how to properly deliver its message, presents a mission and plight that feels all too pointless and unnecessary, and feels like its entire script was scribbled out in a day, without revision. If it seems like I’m not really outlining the story very well either, it’s because it’s difficult to really outline in an efficient way. The Doctor and her companions go to a resort, some aliens attack, they needlessly provoke the aliens, then they have to escape like they should have done to begin with. This is a pointless, forced conflict, and one that even further undermines the urgent climate change message with its own redundancy! It essentially feels like this episode couldn’t decide on two different half-baked premises (the resort-around-hostile-territory hook, and the rescue mission in mutant territory hook), so it tried to sandwich them into one, hoping that it made for one good, fleshed-out premise. As with many cases of television writers trying to do this however, it just leads to a messy, overstuffed storyline that ends up feeling laboured and pointless.

Worse still is that this episode is not directed well at all, with weirdly choppy editing, inconsistent character portrayals, especially among the supposed antagonists, and extremely hokey presentation for the Dregs, which are directed as if they were ripped straight out of a crappy Syfy Original movie. Sure, Doctor Who has never really had amazing special effects, but bad direction really lays bare just how ridiculous the monsters-of-the-week can look and feel in a bad episode. It’s a shame, because the Dregs could have been amazing in another, better Doctor Who storyline, but, like I said, they’re constantly ruined by characters needlessly provoking them, needlessly sacrificing themselves in avoidable circumstances, or the camera just framing them in a way that constantly makes them look like a joke.

“Orphan 55” is a big misfire for Doctor Who, and will likely go down as a low point for the Thirteenth Doctor era, despite its good intentions with the climate change themes. This is a textbook example of what happens when writers and directors are more concerned with pushing a political message than actually realizing a good storyline and characters, no matter how well-intentioned or valid that message may be. The thing is, if your storytelling and characterization are bad, then it doesn’t matter what the episode’s themes are– No one will care about them. Even from the get-go, the idea of Graham somehow collecting off-screen TARDIS coupons from a ruined future Earth that magically teleport everyone to the ruined planet after he arranges them a certain way, without ever specifying how Graham or the Doctor got involved with this promotion in the first place, raises too many questions, and is downright baffling, even by Doctor Who standards. Again, a climate change message can work well for the Doctor Who universe, even when it gets a little heavy-handed at times, but it needs to be layered within a smart, well-written episode, or it will only encourage people to tune out of what it wants to say. Even worse is that this botched climate change-themed episode unfortunately validates many fans’ distrust of the Chibnall era and its more openly political storytelling, shooting the Thirteenth Doctor in the foot in a way that’s really unnecessary.

Well, in any case, it’s back to the past next week. Here’s hoping that we get something better next Sunday.

Doctor Who 12.3: "Orphan 55" Review
Doctor Who hits a low point for Series Twelve in, "Orphan 55", botching a well-intentioned message on climate change with idiotic character turns and too much dopey, convoluted plotting.
THE GOOD STUFF
THE NOT-SO-GOOD STUFF
2020-01-17
52%Overall Score
Reader Rating: (0 Votes)
0%