After most of the The CW’s DC dramas had a chance to pick up in the wake of the massive fallout from the Crisis on Infinite Earths crossover event this week (except for The Flash, which won’t return until February), Arrow stands as the one DC show on the network that’s facing an ending, rather than a new beginning. With Oliver Queen having permanently died during the events of Crisis on Infinite Earths, and Star City seemingly being saved for good (did we just forget about the Ninth Circle? Or are they perhaps erased from history on the new Earth-Prime?), Arrow has well and truly wrapped up most of its ongoing storylines, with only next week’s series finale left to explore the show’s characters and conflicts any further. There is one episode nonetheless left before Arrow’s final bow however, and The CW is using it to start shopping their proposed successor series to Arrow, Green Arrow & The Canaries, which aims to put a future-driven and female-driven spin on the Arrow mythology.

The timing of this backdoor pilot for Green Arrow & The Canaries seems fortuitous as well, not just because it comes so soon before Arrow’s last episode airs, but also because The CW has already picked up a Supergirl spin-off for next season, Superman & Lois, indicating that the network is still enthusiastic about expanding the Arrowverse, even considering that its current slate is getting pretty crowded. I also have to give credit that this week’s tease for the potential Arrow successor series doesn’t simply regurgitate the established flash-forward storylines from this season and last season too, instead unfolding within an all-new future for Star City, one that spawns from the creation of Earth-Prime, as well as a seemingly idyllic scenario wherein Oliver’s sacrifice during the Crisis more or less permanently negates crime in the city for two decades. Okay, that’s very hard to believe, but I suppose this kind of romanticized plot turn is par for the course on The CW, so I can’t say I’m surprised. 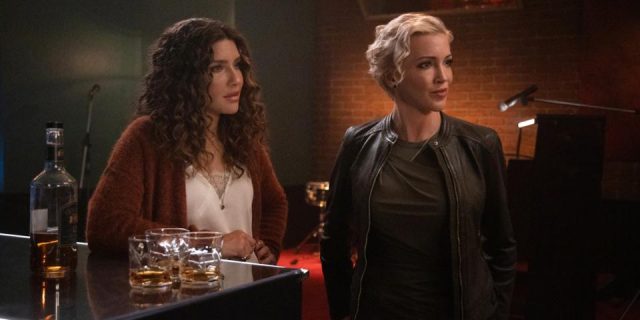 Unfortunately though, despite the fact that it’s at least decent, this backdoor pilot for Green Arrow & The Canaries also doesn’t do quite enough to feel like a truly necessary addition to The CW’s sizable Arrowverse lineup. It feels like a disappointingly boilerplate and calculated effort to give the network more female superhero leads to follow Kara Danvers, Kate Kane and Sara Lance, while also getting around Arrow’s imminent conclusion by simply continuing the same storylines, within a 2040 that looks disappointingly like Star City’s 2020, despite how much of a forward-thinking utopia that Star City has supposedly become in the new future. Hell, Mia Queen, now taking her late father’s last name in the new future, doesn’t even know anything about her former existence as a cage fighter, a Canary-in-training, or a Green Arrow successor from Star City’s aborted Earth-1 future either. She’s just a happy socialite living a charmed life, complete with being engaged to JJ Diggle (who is obviously no longer the leader of the Deathstroke Gang), until Dinah and Laurel show up from 2020, to wake Mia up to her former superhero life.

I will say that the rapport between Dinah, Laurel and Mia is at least pretty good. That by itself is probably strong enough to anchor at least an acceptable new DC drama for The CW. The present-era Dinah’s sudden existence in the future is never explained, which is even more confusing when Laurel simply gets dropped in 2040 off-screen by the Legends of Tomorrow, but I guess this is a mystery that the proposed spin-off wants to craft for itself. In any case, the characterization is fine, with William, Zoe and Connor also living different lives alongside Mia and JJ in the new future, with Zoe no longer becoming a Canary (and obviously being alive again), William now being a highly successful businessman with a problematic love life (little has changed for him then, I guess), and Connor now essentially taking the former JJ’s place as an aimless, drug-addled disappointment, albeit one that seemingly doesn’t run with dangerous criminals. It hints at some interesting character storylines if Green Arrow & The Canaries is picked up, even if that Martian Manhunter-powered psychic ring that restores Mia’s memories is pretty ridiculous, even by the standards of the Arrowverse. I do like the implication that some mystery figure uses it to restore JJ’s former Earth-1 memories as a crime lord during the final seconds of the episode though. 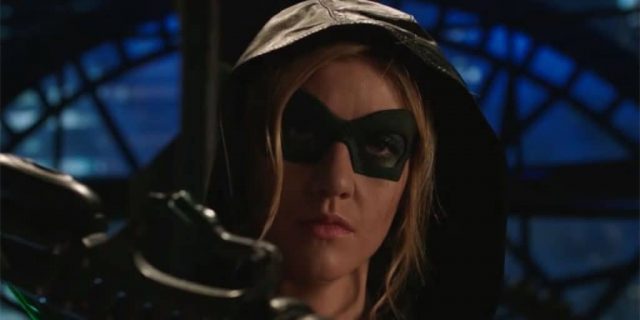 It’s the big over-arching conflict of this episode however that too often makes it stumble. The first mission for the new Green Arrow and Canaries is fair enough on paper, with Helena Bertinelli (remember her?), the former Huntress, having an adopted daughter in Earth-Prime’s new 2040, who ends up being kidnapped. After Sara Lance and the Legends learn off-screen that Bianca is subsequently killed, plunging Star City into chaos and destruction in 2041, this motivates Laurel to intervene, and try and force Dinah and Mia to do the same. Thus, the hunt is on to find Bianca, which is alright in concept, but the detective work is pretty dry here, and too often pushed forward by painfully predictable plot turns. Even worse is that the villain of the episode is Bianca’s angry ex-boyfriend, who is also part of a new Deathstroke Gang, and is pissed because Bianca dumped him, but also because she’s a pawn in some larger plot. Yeah, it’s incredibly contrived and stupid, and this idiot ex-boyfriend is a total pushover in the end, feebly committing suicide after teasing that the Deathstroke Gang has a new female leader in Earth-Prime’s revised future. Because of course it does. My money’s on Sara Diggle, since she was very conspicuously restored in the timeline with the creation of Earth-Prime, but we’ll see what happens there, should Green Arrow & The Canaries get picked up.

Finally, the direction in this backdoor pilot is a little uneven. There are some scenes that are cool, and some bits in the action choreography in particular that are legitimately badass, especially during the climactic fight against the villain-of-the-week’s surprisingly more capable henchmen. That said however, there are other moments in the episode that are needlessly cheesy and cringe-inducing, such as some ill-fitting pop music numbers that try to add some ‘girl power’ kick, but just end up feeling like they’re trying too hard. Likewise, it appears that the faux-woke CW writing that too often drags down Supergirl and Batwoman especially is already infecting Green Arrow & The Canaries, most notably in one of the final scenes, when William comments that it’s misogynistic that people suspect him of being the new Green Arrow, but not Mia. Uh, yeah, the new Green Arrow is very clearly a woman, and on top of that, Mia doesn’t even do that good of a job of hiding her secret identity anyway (she has that in common with Supergirl and Batwoman, in fact), especially considering that her hair and skinny frame are fully visible in the Green Arrow costume. Why is her identity even a question? It should be incredibly obvious to anyone in the city! Moments like these just insult the viewer’s intelligence, and rather than coming off as female-forward or ‘woke’, they actually undermine the female leads by making them look like upstart punks that are surrounded by unimpressive mouth-breathers, rather than genuine superheroes that are thriving in a high-stakes world.

So, in the end, this backdoor pilot for Green Arrow & The Canaries is fine, but it’s also not particularly great. Arrow fans and general DC enthusiasts will likely find the episode acceptable, but they probably also won’t be eagerly hoping that Green Arrow & The Canaries gets picked up either. It just doesn’t feel like a necessary show, and that’s often the biggest problem with this potential glimpse of where the series would go. People seem to be largely content to say goodbye to Arrow in a week, because it had a mostly solid run, it appears to be wrapping up its over-arching storyline on a fairly satisfying note, and its conclusion will potentially provide some welcome space in The CW’s increasingly over-crowded DC drama selection, space that Green Arrow & The Canaries would immediately gobble up for itself. If Green Arrow & The Canaries does get picked up, I won’t be unhappy, but if The CW passes on it, I’ll probably shrug too. The fact is, the Arrowverse already has a ton of shows that we have to keep track of if we want to follow most or all of it, especially now that Black Lightning has been added to it after this season’s crossover event, and Superman & Lois will officially be joining it next season. Hell, that’s not even considering that The CW will be co-hosting DC Universe’s Stargirl in Spring, a series that may not take place in the Arrowverse (even if it is set on an adjacent Earth), but is also competing for the attention of DC fans on the same network, while providing something that seemingly isn’t re-treading familiar territory.

So, regarding whatever ends up happening with Green Arrow & The Canaries, I’m feeling ambivalent about it at this point. I’m sure that I would find things to like if this Arrow successor series is successfully added to The CW’s lineup, but like many other DC enthusiasts, I’m also happy to just put a bow on the affairs of Star City and enjoy the remaining corners of the Arrowverse after Oliver’s death, something that may ultimately be preferable if Green Arrow & The Canaries doesn’t eventually have any better ideas when it comes to continuing the Arrow mythology.