Black Lightning has officially joined the Arrowverse after the events of the Crisis on Infinite Earths crossover, with Jefferson, the Pierce family and all of the other personalities on the show now existing and operating in the same world as The CW’s other DC dramas. Despite that extensive alteration to Black Lightning’s status quo and reality however, it appears that not much has changed in Freeland at this point, especially when the former Earth-1 history of Freeland appeared to mimic that of Black Lightning’s Earth-73 history in many respects anyway. Thus, the ASA is still occupying Freeland on the new Earth-Prime, with the threat of Markovia still looming around the city in this week’s midseason premiere, “The Book of Markovia: Chapter One: Blessings and Curses Reborn”, an episode that has to pull double duty between further escalating the battle against the ASA, while also having Jefferson and Jennifer pick up the pieces after waking up in their new reality.

Yes, it turns out that Jennifer was floating in an anti-matter void during the entire destruction of the multiverse, which provides a convenient excuse for Jennifer to recall the events of Crisis on Infinite Earths, and everything leading up to it on the former Earth-73, without intervention by Supergirl’s J’onn J’onzz. Jefferson of course also recalls the events of the Crisis, even charging back into the barrier-encased Freeland to try and communicate the news to Gambi. Gambi takes the Crisis revelation surprisingly in stride as well, cautioning Jefferson and Jennifer that the revised history of Earth-Prime may be a little different than the former history of Earth-73, which the previous midseason premieres of Batwoman and Supergirl both teased at length for their respective pre-Crisis events during the previous night. Some DC fans may roll their eyes at Gambi urging Jefferson and Jennifer to not tell anyone else about what they experienced, which more or less feels like an excuse for Black Lightning to deliberately barely address the crossover’s immense fallout, but I suppose this is a likely scenario anyway. Black Lightning is still a bit of an anomaly in the Arrowverse at this point, after all, particularly when it’s in an entirely different filming location, on an entirely different production schedule. 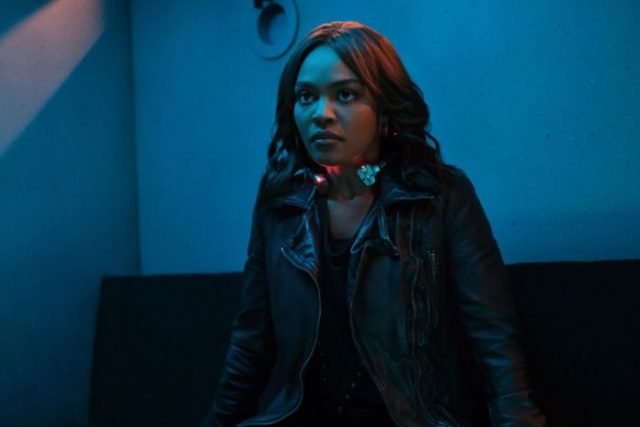 So, with the Crisis not really factoring heavily into this midseason premiere, at least during most of the runtime (a la Batwoman’s midseason premiere from the previous night), Black Lightning is instead left to pick up where it left off in the long battle against the ASA. Jefferson and Jennifer thus split off into their own storylines, which have some bright spots, but it’s also true that this ends up leading to a somewhat unremarkable midseason premiere for Black Lightning, especially considering the fact that the show has now been rolled into the same Earth as The CW’s other DC shows. Both Jefferson and Jennifer make separate strikes against the ASA, with Jefferson re-joining the resistance, while Jennifer decides to pursue a private agenda against Agent Odell with Brandon, and this works well enough, but it’s hard not to feel that the show should have gone a little further when it comes to embracing the new rules of Earth-Prime.

Regardless, Jefferson in particular has his hands full in this episode, first by having to deal with an extensively Green Light-addicted Lynn, who is losing the last shred of her stability, and even slaps Jefferson when he dumps the rest of her stash at the Pierce house! Yikes! There’s no time to dwell on that though (despite it being one of the best storylines of this episode), since Henderson summons Jefferson back to duty with the resistance, where Jefferson once again butts heads with Anissa. Oh, come on, this is getting very old at this point! Jefferson and Anissa don’t even squabble about anything truly useful. Anissa’s concerns especially are so petty and narcissistic that she starts coming off as a self-important idiot, despite being framed as being in the right. Jefferson’s material with Lynn worked well at least, but it was often glossed over by the resistance storyline, which offers some decent action, but doesn’t ultimately amount to much for any of the characters, beyond freeing some nameless captured metahumans from a trip to The Pit.

Jennifer, meanwhile, stabilizes Brandon with a cure that she gets from Lynn, before Lynn has her unfortunate encounter with Jefferson at the Pierce house. It’s at this point that Jennifer decides she needs to kill Agent Odell to boot. This also coincides with an increased aggression effort by the ASA, with Major Grey announcing that Commander Williams is in recovery after his previous battle with Jefferson during December, and that the helpful Sergeant Grayle is being sent to round up Jennifer, alongside an ASA chip-enhanced lieutenant. This is another subplot that at least provides some decent action, with Jennifer and Brandon fighting off some ASA troops in order to get to Odell, something that Grayle actually helps them do. Naturally though, Odell isn’t so stupid as to directly confront Jennifer, instead sending a hologram to chat with her, before Jennifer and Brandon are once again left with no clues. This isn’t too satisfying of a result, but eagle-eyed DC fans are no doubt continuing to keep an eye on Grayle, who seems like he’s on his way to embracing his DC Comics role as superhero, Atomic Knight. Does this mean that he may end up soon becoming a full-on traitor to the ASA?

The last remaining subplot in this midseason premiere centers around Baron/TC and Gambi, and it’s arguably the weakest of the bunch. This subplot begins when TC uses his technocratic metahuman powers to just walk into Gambi’s closed shop, which somehow doesn’t have any countermeasures to prevent just this sort of thing. This feels like a transparent excuse to set TC up as an assistant and potential successor to Gambi, since TC’s poking around inevitably leads to him discovering that Gambi is Black Lightning’s and Thunder’s handler. This is also done through a weird mix of strange humour and tiresome preachiness, with TC’s powers literally making him talk to machines, while Gambi transparently spouts an allegory about how technological dependence is bad for your mental health. Yeah, this is about as subtle as a brick to the face. The fact that Black Lightning is talking down to its audience is annoying enough, but it’s even more inexplicable that the show would pair this with a metahuman ability that even the extra goofy Legends of Tomorrow would declare to be pretty ridiculous, let alone a supposedly grittier and darker show like Black Lightning.

In the end, the Pierce family doesn’t make any real headway in their respective narratives (save for Anissa), and the resistance manages to achieve a short-term victory, merely leaving the ASA primed and ready to strike at them again with twice as much power. “The Book of Markovia: Chapter One: Blessings and Curses Reborn” ironically didn’t feature Markovia at all, and didn’t do much with the fallout from Crisis on Infinite Earths either. In fairness, there is one solid twist saved for the end though, when TC uses his unstable abilities to identify that the person who tried to have Gambi killed a while ago is actually Lady Eve! Considering that Lady Eve clearly died during Black Lightning’s first season however, it remains to be seen whether this is a trick, someone appropriating Lady Eve’s resources, or a doppelganger from another Earth that’s ended up being dumped on Earth-Prime, ready to assume her Earth-73 predecessor’s racket. The revised history of Earth-Prime also could have just erased Lady Eve’s death entirely, with Supergirl in particular already proving that this heavy revision to history on the new Earth-Prime is entirely possible. It’s a shame that the most interesting questions are raised right at the end of this episode however, with the rest of Black Lightning’s midseason premiere aiming squarely for the middle, and not even seeming that excited about the show being moved to an entirely new Earth.

Black Lightning 3.10: "The Book of Markovia: Chapter One: Blessings and Curses Reborn" Review
Black Lightning delivers a functional, but unremarkable midseason premiere this week, as Jefferson and Jennifer separately strike at the ASA, while Gambi tries to look after TC.
THE GOOD STUFF
THE NOT-SO-GOOD STUFF
2020-01-24
68%Overall Score
Reader Rating: (0 Votes)
0%