While the struggle between the ASA and the resistance rages on in the background, things end up getting personal for the Pierce family on Black Lightning this week, after the truth comes out regarding Jennifer’s work with Odell. “The Book of Markovia: Chapter Two: Lynn’s Addiction” makes the welcome decision to reduce the scale of the current conflict against the ASA, and that’s good, since Black Lightning’s uneven third season has often felt like it’s being spread too thin. Nonetheless, we do still get a dump of subplots here, two of which aim to address the bomb that was dropped on audiences last week at Gambi’s lair, while the remaining subplot involves Lynn gaining a surprising new ally.

With the ASA becoming increasingly desperate, and Odell seemingly being on the ropes, now seems like the perfect time for the Pierce family to strike at their ASA nemesis directly. Jefferson in particular is motivated to do this, after Jennifer confesses to him that she got manipulated by Odell into destroying the Markovian data farm, something that was put into perspective for her during her experiences dealing with the former multiverse. This finally has Jefferson eager for a fight, even convincing Anissa to join him as Thunder, but the two still insist on sticking to their principles, despite Jennifer insisting that Odell still needs to be killed. It’s good to see that Jennifer hasn’t just ditched her inability to grasp murder by powers on a dime, since it helps her character remain an interesting contrast to her father and sister, even though Lightning as a superhero isn’t widely known in Freeland yet.

Gambi ends up eventually joining the effort to apprehend Odell too, which surprisingly goes off without a hitch, but before that, he has to consult Lynn about stabilizing TC’s out-of-control metagenes. This provides our first look at just how much Lynn’s addiction has taken a toll on her (hence the title of the episode), with Lynn appearing exhausted, sickly and feverish, yet insisting that she’s fine. It’s kind of unbelievable that Lynn is still finding ways to hide her obvious drug addiction, but I guess the other Black Lightning characters have bigger fish to fry at this point. Regardless, Gambi gets a metahuman stabilization cure from Lynn, and is able to stabilize TC, subsequently learning that the hit on him was ordered by Lady Eve. Gambi brushes this revelation off though, recalling that Lady Eve died during Black Lightning’s first season, even though it appears that this didn’t ultimately stick in the new Earth-Prime history.

Though Lady Eve did indeed die at the same approximate time in The CW’s new Earth-Prime universe, it appears that at some point, whether on the old Earth-73 or Earth-Prime, she was resurrected by Lazarus, the same creepy old guy who brought back Lala. Speaking of Lala, we actually get to check in with The 100 for a change this week, when Lala dispatches one of his men to check out a new brothel that isn’t paying protection money. Sure enough, this brothel is run by Lady Eve, eventually resulting in a confrontation between these two OG Black Lightning villains. It’s good to see Lady Eve again, since she is one of the show’s best legacy villains, but it was disappointing that she ultimately folded so easily with Lala. Has Lady Eve lost a step after her resurrection? Maybe I just miss the ruthlessness of Tobias Whale, who has spent this entire season in the Pit so far. 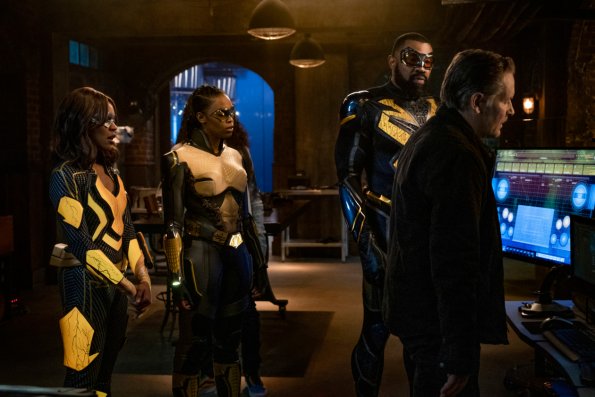 Fortunately, that status quo with Tobias is mercifully about to change, after Lynn decides to strike at the ASA by smuggling him out of the Pit. Lynn is even joined by turncoat ASA sergeant, Gardner Grayle, whom she contacts after noticing that he never logged her missing bag. The two work together to test a new serum that gives ordinary humans temporary metahuman abilities (gee, I can’t see this being abused at all…), with Grayle eventually being temporarily turned invisible by Maryam’s chameleon abilities. This is how the two smuggle out Tobias, with no shortage of snark along the way, but right as they prepare to fully get away from the ASA’s territory, Lynn and Grayle are both tasered and captured by the Markovians, likely alongside Tobias too! Oh yeah, this ASA occupation was about something, wasn’t it? On the bright side, Lynn being captured should put her closer to Dr. Jace, who may be able to do something about Lynn’s Green Light problem.

Finally, one of the remaining highlight moments of this episode involves Jefferson and Anissa overseeing Gambi, as he prepares to torture a captured Odell. This is a pretty intense moment too, one that appears to have both heroes compromising their former principles, particularly Jefferson, who seems all too eager for revenge after Odell’s manipulation of Jennifer. This is ultimately a well-executed trick though, with the trio simply hoodwinking Odell into speaking for a voice map, whom they then prepare to set free, only to be ambushed by Khalil and some ASA soldiers. It turns out that Major Grey got a little impatient with the Pierce family, so Khalil is now confronting all of them directly, including Jennifer, who shows up to basically be a Deus Ex Machina. Considering that all of the Pierce family superheroes are together now, it’s a bummer that the confrontation with Khalil is so quick and anti-climactic, but at least Jennifer got a chance to actually flex her powers for a change, even as Odell seemingly flees back to his apparent home in Gotham City afterward. Yeah, Odell is from Gotham, apparently. I guess this implies that Gotham existed on the former Earth-73, even though Batman and Batwoman were no doubt fictional characters there, alongside the Arrowverse’s other heroes. 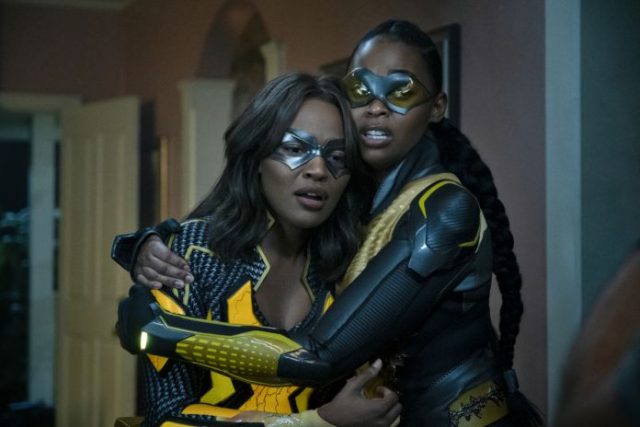 The occupation of Freeland is still too frequently straining the story focus of Black Lightning, but at least that problem was remedied a bit in this week’s episode, due to the smaller and more personal conflicts among the Pierce family. “The Book of Markovia: Chapter Two: Lynn’s Addiction” nicely advanced several storylines, even without directly featuring the resistance this time, and while her first big act is to uncharacteristically fold against Lala, it is good to see Lady Eve return to the series in earnest. One can’t help but feel like some of Black Lightning’s previously harsh and grounded stakes are a thing of the past at this point, since the convenient resurrections of Khalil, Lala and Lady Eve alike have now openly placed the series in the same purely fantastical territory as the rest of the Arrowverse, though I guess that tracks, since Black Lightning seemed to be grooming itself to join the Arrowverse for at least a year beforehand anyway, and now it’s successfully done so. The big takeaway aside from Lady Eve’s re-appearance however is the fact that Lynn and Tobias are now in the hands of the Markovians, which is very bad for the heroes and the ASA alike, since it puts the Markovians directly on the path to overtaking Freeland and the ASA with their own army of manufactured metahumans.