Harley Quinn brought its eccentric gang of anti-heroes to the big leagues at long last during last week’s episode, officially inducting Harley and her crew into the ranks of the Legion of Doom. “A Seat at the Table” thus picks up with Harley’s first day in the Legion, alongside her henchmen, and naturally, the day doesn’t unfold exactly as all of them hoped. Complicating matters most however is Harley now having to work as a super-villain colleague of the Joker, all the while threatening to backslide into her old toxic relationship with the Clown Prince of Crime, even at the expense of all of her new friends.

To some extent, the ultimate payoff of, “A Seat at the Table” is very predictable, and this is something that sometimes hurts the episode. Fortunately, there are some good gags in the subplots with Ivy and the other crew members though, injecting some humour into what’s otherwise a largely narrative-driven core storyline with Harley and Joker. Harley and Joker still manage to get a few good jokes in, but their material definitely re-treads a lot of old notes, sometimes intentionally. After all, as much as Harley is trying extra hard to embrace a new future of being Legion of Doom colleagues with her former super-villain lover, it’s practically inevitable that the Joker eventually manages to rope her back in, jeopardizing pretty much everything that Harley has worked to achieve up to this point. 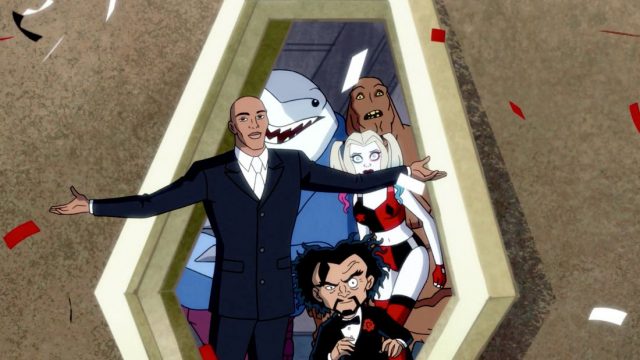 In a way though, this tragic turn is nicely made apparent to the viewer, which helps the drama behind Harley’s regression land pretty nicely. As Joker wines and dines Harley in response to Harley critiquing a villainous plot that Joker pitches during a previous Legion meeting, Joker keeps gradually edging Harley closer and closer to the former fantasy that she had, complete with Joker finally allowing Harley to escape alongside him, after Batman arrives to apprehend them. Naturally though, this is also a trick, with Joker pushing Harley out of his helicopter to buy himself extra time to escape from Batman, leaving Harley to reflect on all of her poor choices again, as she tumbles into the water.

Worse than the price to Harley’s dignity is the fact that the one kiss she shares with the Joker before being booted out also happens to be broadcast all over live television (somehow). This conveniently allows Ivy and Harley’s crewmates to see it, after King Shark winds up hospitalized from a botched plot by Bane (more on that in a second). Again, the payoff is a little predictable here, but it largely works, with Harley’s henchmen all leaving her crew, and Ivy breaking off her friendship with Harley for good, declaring that Harley will never truly change. This is already an effectively emotional turn, but it’s made even better after Ivy tries to take on a new Gotham City construction plant on her own, only to be gassed and captured by some mysterious people. Sure, it’s a transparent way through which Harley can inevitably work her way back into Ivy’s good graces, but it’s nice to see this episode go a little bit further, when it could have easily ended on the note of Harley simply being abandoned by all of her friends. 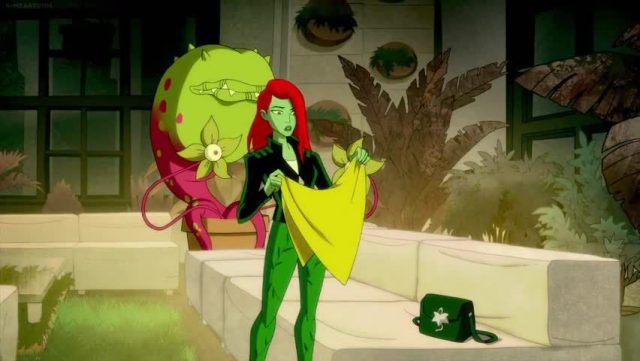 It was the subplots where the humour tended to excel the most in this episode, especially since that’s where most of the actual storytelling curveballs tend to come from. As you can imagine, Harley getting recruited into the Legion of Doom doesn’t quite provide an amazing payoff for Doctor Psycho, Clayface and King Shark, all of whom end up stashed with the goons in a crappy lower floor office. Even worse is that Bane forcibly ropes Harley’s re-tasked crew into his own asinine operation to blow up a smoothie shop, after an employee willfully keeps calling him, “Bang” on his smoothie cups (which, as it turns out, is an intentional prank by the Joker, in a pretty funny twist). This is the point when King Shark gets injured, since the employee that Bane wants to detonate doesn’t even work on the day of the plot, providing a nice cherry on top for this simple, but effectively executed joke storyline. I’m not sure if Batman/DC fans might get a little irked that Bane is being uncharacteristically portrayed as such a simple-minded imbecile on Harley Quinn, when he’s one of the most physically and mentally deadly criminal masterminds in Gotham City throughout his career in DC Comics lore, but I suppose that the jokes surrounding Bane are at least funny, and that’s really the bottom line.

“A Seat at the Table” hinges largely on a predictable core storyline with Harley and Joker, while the supporting cast tended to excel the most in terms of laughs. Even so, Harley’s inevitable backslide into old habits ends up having appropriate and impactful consequences for Harley’s character. Harley has achieved everything she’s ever wanted, but her one lapse in judgment with the Joker has now cost her all of her friends, and possibly even her entire standing at the Legion of Doom to boot. This is unfortunately timed with Ivy’s capture as well, possibly by the Legion’s own people, since they always wanted Ivy to join them in Harley’s place anyway. I’m not sure how the humour is going to be upheld in next week’s Harley Quinn episode, since the story seems to be headed in slightly more dramatic territory for its following offering, but with just a few episodes left in the show’s debut season, it does at least seem like the series is headed towards a truly definitive test of Harley’s character, one that might see her choose herself over recognition even among DC’s most despicable super-villains.