The Flash finally returns for its midseason premiere this week, after a slightly longer period off the air, in order to allow Arrow to finish its final handful of episodes in January. Now that Arrow has concluded, The Flash is free to resume its usual timeslot on Tuesday nights, and fortunately, the show appears to be kicking off 2020 on a very strong note! “Marathon” continues the renewed hot streak that Season Six of The Flash has been enjoying, providing a smart and emotionally gratifying payoff to the fallout left in the wake of the Crisis on Infinite Earths crossover event, while setting up some promising new post-Bloodwork threats for Team Flash, after the revised history of Earth-Prime creates many new villains and hazards on the Arrowverse’s ‘New Earth’.

Batwoman, Supergirl and Legends of Tomorrow have all done their part in teasing new and unexpected twists from Earth-Prime’s creation (even though Black Lightning has largely ignored the fact that it now takes place in the same universe as The CW’s other DC shows, at least so far), but seeing as The Flash has taken over for the now-concluded Arrow as The CW’s current flagship DC drama, The Flash in particular went to town when it came to setting up some big new challenges for its heroes, now that they’re living in a bigger, busier post-Crisis world. Despite the healthy dose of new DC teases and Easter eggs however, it was the grounded, human character moments that really made this midseason premiere for The Flash excel most, as Team Flash struggles to adjust to a reality where they’re no longer being faced with the destruction of the entire multiverse. 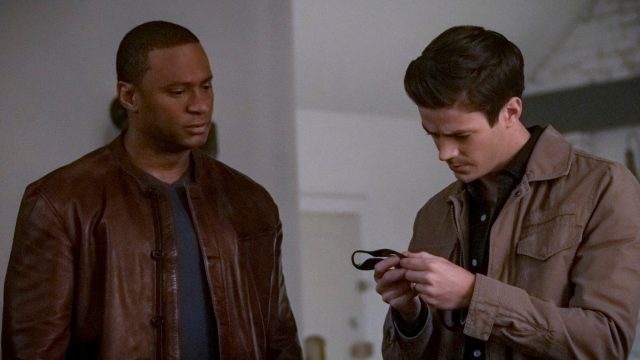 This struggle primarily manifested across three major story arcs, all of which excelled for the most part. These individual storylines were upheld by Barry, Cisco and Iris, with most of the show’s other characters being background personalities for now, and Ralph disappointingly sitting this episode out entirely. Barry’s storyline brings in Arrow alum, David Ramsey to briefly reprise his role as Oliver Queen’s best friend, John Diggle though, namely to deliver Oliver’s original Green Arrow mask to Barry, as a parting gift from the late Oliver. Barry however becomes consumed by the idea that the mask is a warning for some cryptic threat, and in the process, Barry drags Diggle all the way to Lian Yu, after he discovers traces of Mirakuru on the mask!… Only to find no Mirakuru left on the island.

This was an unexpected, yet highly satisfying payoff that nicely complemented the other major story arcs of this episode. With Barry having survived Crisis, after he was expected to sacrifice his life to save the multiverse (a demand that ended up being undertaken by the now-dead Flash of Earth-90), Barry has found himself unable to slow down and enjoy the post-Crisis world, instead being worried about protecting everyone that he’s now able to live alongside again. Cisco and Iris both end up facing similar conflicts as well, with Cisco obsessively trying to map the new locations and people from the destroyed alternate Earth’s that merged into Earth-Prime, and catalogue all of the new and restored villains that now infest Earth-Prime to boot, while Iris starts exploring a scoop that ties into the mysterious group of villains that Barry and Ralph seemingly discovered during their investigation into the missing Sue Dearbon, back several episodes ago. 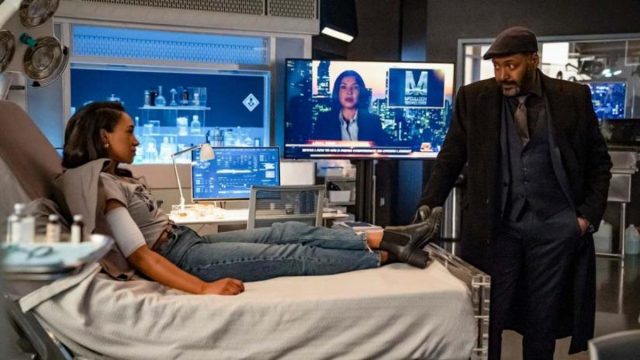 This villainous group is even unmasked right away thanks to a new, short-lived source for Iris as well, Black Hole. Black Hole is a very recent, Rebirth-era terrorist organization in DC Comics lore, wherein they build themselves around capturing and forcibly training metahumans as assassins, while also aiming to exploit the Speed Force’s power for their personal gain. It seems that their agenda in the Arrowverse is very similar as well, with Iris being stalked by a new incarnation of super-villain, Doctor Light, Kimiyo Hoshi, after she pokes into McCulloch Technologies, an apparent front for Black Hole. Interestingly, Hoshi is a hero in DC Comics lore, not a villain, but in the case of The Flash, she’s a fixer for Joseph Carver, the current CEO of McCulloch Technologies, whose original CEO, Eva McCulloch disappeared under mysterious circumstances. This finally appears to present a fully-fleshed-out narrative payoff to the long-teased McCulloch Industries, who have been a corporate presence in the Arrowverse’s Central City for several years now, even playing a key role in the defeat of Cicada II last season.

Iris’ story arc goes in an interesting and bold new direction for the Arrowverse too, particularly considering that sibling series, Supergirl has explored some similar narrative territory through CatCo, and yet this obstacle with Iris never seems to come up with Kara. After Cecile advises Iris not to run her story on McCulloch Technologies, Iris does so anyway, off the hunch of a discredited source, and subsequently gets sued for defamation. This is actually a really mature, believable twist too, one that forces Iris to confront her own inability to slow down and have accountability in the wake of the extreme preparation that Team Flash had to undertake for Crisis on Infinite Earths. Mind you, this storyline would have worked best if McCulloch’s CEO wasn’t such a moron though, which does deflate the conflict with Iris a fair bit. Not only does Carver leave blatant clues to his involvement with Black Hole in plain sight, but siccing Doctor Light on Iris in the first place creates a ton of evidence that the company is guilty of something! It would have made a lot more sense to just bury the Citizen in legal fees, like Cecile warned about, since attacking Iris will only embolden her to further seek out the truth. Hell, Carver even gives up the lawsuit pretty easily to boot, making that solid twist pointless in turn. 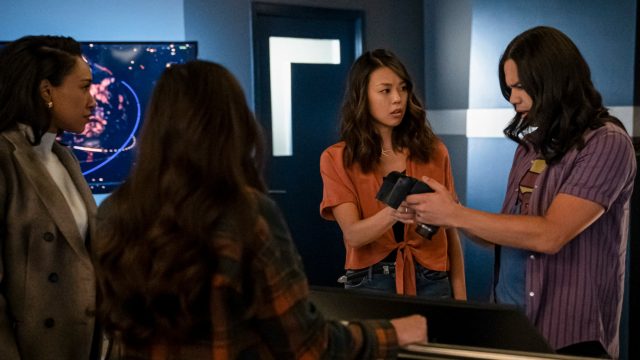 Cisco, meanwhile, also begins an interesting new narrative course in the fallout from Crisis, now having lost his Vibe powers again. Cisco finding himself overwhelmed with the new locations and threats from other Earth’s is a legitimately inspired dramatic obstacle for this post-Crisis midseason premiere, especially when Cisco is the one who has to most directly confront the survival of Nash Wells, the one remaining Harrison Wells in all of existence, after the rest of the Harrison Wells doppelgangers, including Harry (along with Jesse Quick), were all wiped out with the destruction of the multiverse. Cisco finding it within himself to forgive Nash is very heartwarming, and it does reasonably lead to a new drive by Cisco to explore Earth-Prime, and catalogue the new additions that weren’t previously present on Earth-1.

DC fans will also love how much of an Easter egg treasure trove Cisco’s studies already are to boot, with the global locations of each of the Arrowverse’s home cities and key locations being officially revealed in-canon (save for Central City itself, ironically, but ancillary media already placed Central City as a St. Louis analogue in Missouri), along with teases for future locations and story turns to come. These include revelations that Earth-2’s Gorilla City is now on Earth-Prime, located near Zambesi and Nanda Parbat, Bane’s prison region, Santa Prisca exists on Earth-Prime (teasing a Bane-themed storyline to come on Batwoman), San Monte exists on Earth-Prime (which is a very obscure fictional Latin American region from Superman lore, suggesting that it could soon anchor a storyline on Supergirl, or perhaps even the upcoming Superman & Lois), original Justice League headquarters, Happy Harbor exists on Earth-Prime (this could be where Barry set up the heroes’ table at the end of Crisis on Infinite Earths), and, most amusingly of all, the sentient island of Kooey Kooey Kooey exists on Earth-Prime, which is where eccentric DC heroes, Blue Beetle and Booster Gold attempt to launch their own casino, because comics. That Kooey Kooey Kooey tease is the most interesting of all, since Arrowverse godfather, Greg Berlanti was allegedly producing a Blue Beetle & Booster Gold movie, before it seemingly ended up in development hell. This could be a sign that Berlanti is still pursuing that project, and it may very well take place in the Arrowverse, if it’s successfully produced. 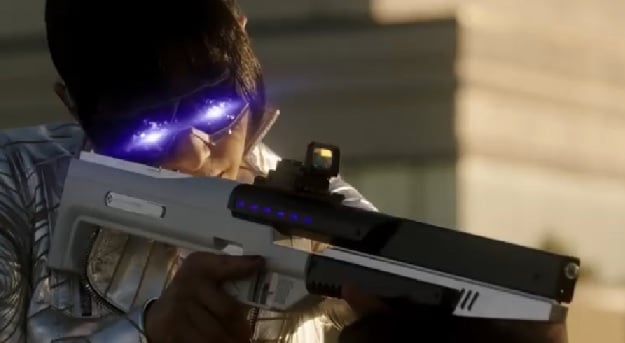 As fun as it is to see The Flash so excitingly embracing the new status quo of Earth-Prime and its many potential new threats however, it was the fantastic human touch behind this midseason premiere that really made it feel like a winning start to the show’s 2020 run. “Marathon” provided an inspired, multi-layered conflict for three of The Flash’s key leads, while nicely setting up the new over-arching threat that’s set to succeed Bloodwork, along with tons of exciting new metahuman threats for the Arrowverse. More than any other hero group currently in the Arrowverse, it seems like Team Flash is ultimately shouldering the bulk of managing what’s to come for Earth-Prime, now that the Superman Family and their related personalities, along with Black Lightning and his related personalities, have merged with the mainline Arrowverse, alongside many other threats from many other destroyed Earth’s. This makes sense as well, since The Flash is now taking up the responsibility of being the headlining series for the Arrowverse, since Arrow has ended. Even with the Crisis now being behind the Arrowverse’s heroes however, The Flash once again highlights just how many exciting storytelling possibilities now exist in the post-Crisis world, a world it’s very ready to embrace to its fullest, without forgetting the sublime heart behind the established characters that we’ve already come to love.

The Flash 6.10: "Marathon" Review
The Flash excels with a superb midseason premiere this week, as Barry, Iris and Cisco struggle to resolve the emotional fallout from Crisis on Infinite Earths, while a dangerous group of new villains begins to make themselves known.
THE GOOD STUFF
THE NOT-SO-GOOD STUFF
2020-02-06
88%Overall Score
Reader Rating: (0 Votes)
0%