Black Lightning continues to build up to next week’s season finale throughout this week’s episode, as the ‘Book of War’ pod ultimately stays on much the same note as it did last week. “The Book of War: Chapter Two: Freedom Ain’t Free” continues to try and flesh out the budding Outsiders and Gravedigger alike, while also continuing to neglect the anti-ASA resistance. Despite this however, Odell appears to have yet more shady dealings going on behind the ASA, as Lady Eve continues to try and regain her old influence, by approaching Odell with an interesting offer.

It remains apparent that Black Lightning really wants to groom the Outsiders as a major presence on the show next season, considering how much focus continues to be placed upon them. That focus ends up being heightened when Jefferson tries to present an initial battle plan for Freeland’s metahuman heroes as well, one that sees Jennifer displeased that she’s on the reserve line. Jefferson’s plan makes sense on paper, but one thing this episode does well is highlight just how much Gravedigger is a powerful, dangerous foe, unlike any that Jefferson has faced before. That’s why it’s frustrating that Gravedigger has only showed up at the very end of this season, despite now being presented as the season’s major arch-villain.

Even then however, Gravedigger’s added development remains fairly strong here, which is why it sucks that we didn’t get more of it before the past few episodes. We learn in this episode that Gravedigger got his name in the Arrowverse from always insisting on burying his enemies honourably, an extension of his original grave registration job from WWII. Not only that, but some routine experimentation by Lynn also yields a shocking revelation for Jefferson, namely that Gravedigger is his blood relative! Apparently, Gravedigger is Jefferson’s great uncle, who disappeared during WWII, with Jefferson’s family subsequently presuming him dead. In reality however, this nicely explains why Jefferson, Anissa and Jennifer were always stable metahumans, since they share DNA with Earth-Prime’s original stable metahuman. This family connection doesn’t currently appear to mean much from an actual dramatic standpoint though, since, like I said, Gravedigger is being introduced too late in the season for this revelation to truly matter in the storytelling.

The rest of the Outsiders mostly bumbled around their own storylines here, and honestly, many of them were underdeveloped and not terribly satisfying this week. Black Lightning still has a bad habit of spreading its narrative focus far too thin, and in trying to give all of the Outsiders something to do before the actual battle for Freeland, it just ends up feeling like it’s wasting most of their character arcs. TC continues to hit on Erica, which goes nowhere, and Anissa even proposes to Grace, which they reveal to the Pierce family and their allies at a dinner… And this goes nowhere, since Gravedigger’s arrival interrupts the impulsive marriage ceremony. Finally, Brandon ties up Dr. Jace and… Forces her to watch him play video games? What? Yeah, Brandon got particularly short-changed this week, since he initially pitches a fit and walks away from the battle over having to work with Dr. Jace, and yet, Brandon still doesn’t seem to have the spine to actually do Dr. Jace in to boot. What the hell is going on with Brandon’s character lately? He needs to get his head back in the game!

Speaking of getting one’s head back in the game, Lady Eve and Lala continue their own respective criminal dealings this week, which continues to foreshadow conflicts that will probably play out next season. Interestingly, Jefferson and Anissa initially approach Lala early in the episode, to try and recruit him and his forces, once they learn that the U.S. government is planning to nuke Freeland, should the heroes lose against Gravedigger. Lala predictably refuses to help though, instead taking one of Lady Eve’s girls hostage (or, at least appearing to), so he can learn the whereabouts of the still-missing Tobias later on. Lady Eve, meanwhile, approaches Agent Odell with information related to the missing briefcase, attempting to trade it to regain her seat on the, “Shadow Board.” I’m assuming this so-called ‘Shadow Board’ is probably an Arrowverse stand-in for the Kobra Cult, Lady Eve’s usual criminal faction from DC Comics lore, but either way, it’s interesting to see Lady Eve attempting to corner influence with both criminals and the government, even though we probably won’t see what comes of this until next season.

Finally, Khalil and Jennifer get their own subplots, though at least these ones manage to somewhat rise above the disposable Outsiders subplots this week. Khalil is nearly killed by Markovian soldiers, to start, only for Painkiller to break free, and save his life by killing all of the soldiers. Painkiller then resumes his mission to kill the Pierce family, leaving Khalil trapped inside of his own mind. That’s dangerous enough, but Jennifer finds herself facing her own issues to boot, when she enlists TC to covertly tell her when Gravedigger arrives in Freeland. Once Gravedigger appears in the city, shortly before Anissa’s and Grace’s impromptu wedding ceremony, Jennifer then rushes off to try and fight Gravedigger directly, only to be easily defeated. Jefferson manages to save Jennifer from being nearly killed at this point, complete with restarting her heart, and this handily places him near Gravedigger, beginning a major duel between the two metahumans, as the episode concludes. I guess this is at least an exciting tease for next week’s season finale, which looks like it’s going to be plenty action-packed! 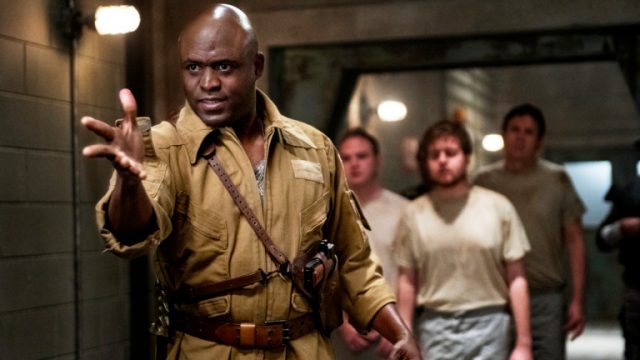 Black Lightning continues to do what it can to wrap up its many ongoing character arcs from this season, while also hastily laying the groundwork for future threats to Freeland, which will no doubt become apparent next season. Even then however, “The Book of War: Chapter Two: Freedom Ain’t Free” feels like a bit of a filler episode, existing simply to finish laying the foundation for next week’s season finale, while building on the fallout of the Markovian operation that was experienced last week. Now that we’re finally down to the season finale however, Jefferson and co. can no doubt finally prevail against Gravedigger, Markovia and hopefully the ASA once and for all soon, even though the latter will probably still be an issue to some extent, especially with Lady Eve conspiring to rebuild her own government connections. Since both Lady Eve and Lala have shown themselves to be much more interesting villains than the ASA and Markovia though, this presents all the more reason to look forward to the long-running Freeland occupation finally being over after next week.