NOTE: Some spoilers from throughout the first season of, “Harley Quinn” are present in this review

It’s amazing how popular DC villain and/or anti-heroine, Harley Quinn has become since her debut on Batman: The Animated Series in 1992. In recent years especially, Harley has surged in fandom and acclaim, ultimately surpassing Wonder Woman as both DC’s most recognized and popular female character, and even as something of a feminist icon. What began as a concept for a kooky, kid-friendly cartoon moll for the Joker has since evolved into a timeless character arc of relationship abuse, tragedy, self-healing, and even hope, something that’s resonated with women and men alike in the real world, allowing Harley to transcend her humble cartoon origins, and become a champion for the downtrodden.

Thus, after Harley eventually became a headliner throughout her own DC comic books, it was only a matter of time before she headlined her own television series, coincidentally around the same time that she also starred in her own movie, this past February’s R-rated DC Extended Universe vehicle, Birds of Prey (and the Fantabulous Emancipation of One Harley Quinn). Said television series quickly found a home on the still-frustratingly-U.S.-exclusive DC Universe streaming platform as well, marking the streaming service’s first original animated series, following on from legacy animated series revival, Young Justice: Outsiders. Here in Canada meanwhile, Harley Quinn instead settled comfortably onto the Canadian Adult Swim channel, where it airs on Sunday nights, as a worthy complement to reliable adult cartoon staples like Family Guy and Rick & Morty. DC Universe had such outstanding confidence in Harley Quinn in fact that it ordered a substantial twenty-six episodes for the series right out of the gate, which would ultimately be split into two thirteen-episode seasons. 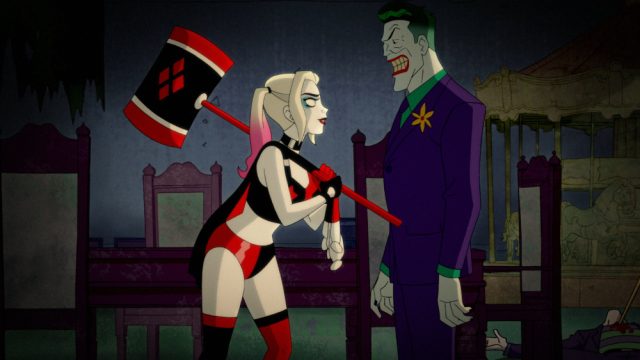 With the first season, and the first half of Harley Quinn’s initial episode order, now having been completely released, we can now also see that the show truly is another gem for the criminally underrated DC Universe original series catalogue. Being a half-hour, adult-oriented cartoon series, Harley Quinn portrays a lighter, more irreverent take on the DC Universe, unfolding within a Gotham City that’s protected by a comically gruff Batman, a screaming cuckold Commissioner Gordon, and, when the bureaucracy allows it, a proudly conceited Justice League. Those do-gooders obviously aren’t the main characters of Harley Quinn however, which instead unfolds from the perspective of its titular anti-heroine, voiced by The Big Bang Theory’s Kaley Cuoco, a freshly independent, highly ambitious criminal jester that’s determined to make her own mark on Gotham.

This endeavour begins on a showstopping note right from Harley Quinn’s first episode, which eventually culminates in Harley dumping her narcissistic and abusive boyfriend, the Joker (voiced by DC Universe regular, Alan Tudyk), and vowing to achieve super-villain success on her own terms. Now living with another recognizable Batman villain, Poison Ivy, voiced by Lake Bell, who in this universe is a blunt, sardonic voice of reason that never seems to notice nor care how violent her ‘environmentalism’ is, Harley thus begins to build a crew and undertake her own heists. All the while, Harley’s ‘career’ goal is to get into the Legion of Doom, the familiar organized collective of every high-profile earthbound DC super-villain, including Lex Luthor, Bane, Black Manta, Scarecrow, Penguin, Cheetah, and of course, the Joker. This is an objective that’s predictably pursued through all manner of hijinks, from criminal heists that don’t go as planned, to over-the-top misunderstandings, to Harley being in over her head when it comes to pretty much everything she does. 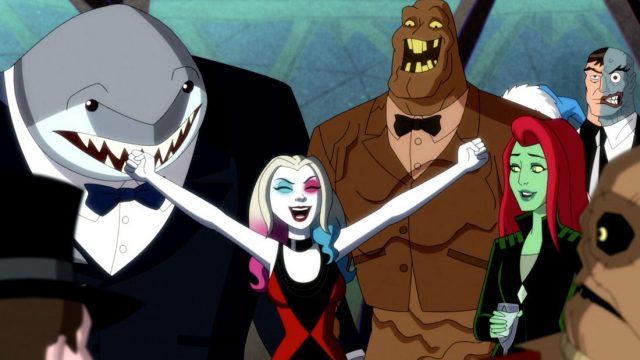 Much of Harley Quinn’s success comes down to how exceptionally written its first batch of episodes are. Not only are the jokes frequently energetic, unpredictable and funny, but the serialized narrative even finds creative ways to build off of seemingly minor gags from prior episodes, eventually coming together in a surprisingly violent, high-stakes climax for the season. Better still is that Harley Quinn makes very sparing use of Batman, with the Dark Knight only showing up in a handful of episodes, and Commissioner Gordon only truly anchoring one (albeit one of the season’s best!). This allows Harley and her ragtag crew of DC rejects to steal the show with maximum comedic efficiency, with Harley’s crew being rounded out by relentlessly misogynistic Wonder Woman villain, Doctor Psycho (voiced by Toy Story 4’s Tony Hale), obliviously over-the-top thespian and B-list Batman villain, Clayface (also voiced by Tudyk), furious, geriatric and cybernetic former government stooge, Sy Borgman (voiced by Seinfeld’s Jason Alexander), and the impractically intelligent and nerdy DC monster man, King Shark (voiced by Trolls’ Ron Funches).

The resulting cocktail of amusing, well-developed and memorable characters anchors a series of misadventures that’s frequently shocking, and yet, they always build towards interesting story developments as much as they do lovable jokes. There’s just the right amount of ‘girl power’ punch to Harley Quinn as well, with Harley’s all-male ensemble of cohorts helping to keep things even and appealing for DC’s many male fans. As much as the supporting cast truly is impeccably realized however, it’s the core dynamic between Harley and Ivy that provides the real heart to the series. The friendship between the two often gives the other what they’re missing, in turn creating not only a faithful throwback to Harley’s and Ivy’s playful, sexually tense and close friendship (sometimes relationship) in DC Comics lore, but also a way to improve already good jokes through their witty banter. For now though, Harley and Ivy are just friends, which is mostly down to Ivy instead striking up a surprise romance with the most embarrassing, ill-conceived Batman villain of all time, Kite Man (voiced by Veep’s Matt Oberg), an affair that works so much better than you’d imagine it would.

Granted, there are a few episodes in this debut season that don’t work as well as most of the others. A few storylines aren’t all they could have been, especially when Harley Quinn doesn’t always succeed at effectively juggling its robust roster of characters. The first episode of the series in particular feels like a clash of tones that don’t always gel together, even though this is a small issue that’s fixed rather quickly in subsequent episodes. The bold, unapologetic R-rated tone of this animated series often proves to be a real gut-buster though, allowing Harley’s animated tale of criminal redemption to avoid pulling punches, both in terms of narrative themes and the overall humour. The cartoon presentation effectively allows all sorts of hyper-exaggerated violence and destruction, particularly when lesser-known DC sorceress, the Queen of Fables (voiced by beloved comedian, Wanda Sykes) shows up in several episodes, to showcase a fully unhinged and proudly murderous villain, one that draws a dark, but defined line for Harley to walk on her own journey to more mischievous villainy. All of this becomes even better thanks to Harley Quinn’s sharp animation quality as well, which greatly capitalizes on the masterful work of Warner Bros. Animation to realize both its hyperactive violence and its potent humour.

This dark, but cheeky tone is one of the most interesting elements of Cuoco’s animated take on Harley– She’s not a murderer, or a psychopath, or a violent offender. She just wants to play with the big boys, and be taken seriously within her chosen identity as a mischief-making hooligan. Thus, despite the fact that Harley is supposed to be a ‘villain’, even through her own self-identification, viewers can easily root for her, since they can no doubt relate to Harley’s innocent, yet determined struggle of trying to be taken seriously within a world that doesn’t want her to succeed. This leads to a surprisingly effective underdog story that has Harley battling, and eventually conquering, both sides of the law, eluding the pursuit of Batman just as much as she’s outwitting the dismissal and outright sabotage from the Legion of Doom’s established frat boy super-villains. This struggle is also shared by the rest of her crew, complemented in turn by the more confident and self-assured Ivy, who must nonetheless learn to be more vulnerable and open-hearted through the influence of both Harley and Kite Man. 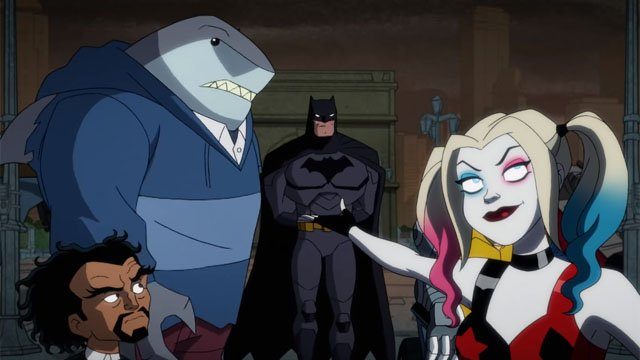 Harley Quinn still would have succeeded if it were simply a brash and farcical take on Gotham City and DC at large, but the fact that the series goes one step further with its surprisingly heartfelt narrative and surprisingly relatable characters, amoral as they are, makes it another oustanding original series for the DC Universe streaming platform, or Adult Swim for us Canadians. This adult-oriented animated series is full of memorable scenarios and lovable personalities, and the fact that it’s so far only presenting half of the series’ initial episode order in Season One is very exciting to boot! Even if you don’t know anything about Harley Quinn herself, or any other DC characters throughout the show (and there are a lot of them!), Harley Quinn remains a lovable and funny underdog story that’s just as appealing on its own merits for the uninitiated. We won’t have long to wait for fresh episodes either, since, in a rather unprecedented move, Harley Quinn’s second season is set to debut at the start of this April, marking just over a month’s gap between the show’s first two seasons!

DC Universe’s current original series lineup may have deftly proven that it can deliver compellingly dark, narratively rich live-action dramas for discerning adults, between the ultra-gritty Titans, the brilliantly tragicomic Doom Patrol, and the engrossing, frustratingly short-lived Swamp Thing, but Harley Quinn also proves that DC’s streaming platform can just as skillfully provide light-hearted, uplifting and hilarious comedy programming to boot. It goes to show that DC can and should embrace its sense of humour, on the small screen as much as the big screen, especially when it can do so with the kind of pitch black charm and deceptively inspiring themes that Harley Quinn pulls off with aplomb!