After taking a week off the air, Batwoman returns with an especially busy episode this week, presenting yet another minor DC Comics antagonist as a villain-of-the-week, while also furthering several key story arcs surrounding the show’s ensemble cast. “Grinning From Ear to Ear” is a rather busy episode for Batwoman, but it’s certainly not one of the show’s worse offerings, even though it still suffers from an unimpressive, disposable villain-of-the-week, who yet again pales in contrast to her DC Comics inspiration. Fortunately, a much better handling of Kate’s and Sophie’s romantic drama helps to make up for that, as does a promising new mystery brewing within the Crows.

Kate was especially busy in this week’s episode of Batwoman, since both sides of her identity come into play here. After her steamy encounter with Sophie at the end of the previous episode, Kate and Sophie both struggle to try and reconcile their precarious emotional position. This also happens to coincide with Sophie’s highly conservative mother surprising her with a visit, just in time for Sophie to admit to Mom that she’s become separated from her husband, and suspended from the Crows. Naturally, Sophie’s mother is none too happy about Sophie’s latest personal revelation as well, namely that she’s gay, and has feelings for another woman.

In a rather predictable turn, Sophie’s mother dislikes Batwoman, despite allegedly being in favour of Batman, though Sophie doesn’t even get as far as admitting her love for Batwoman, before her mother walks out on her. Sophie admitting her true affections and earning the scorn of her rather backwards mother however, while also having to decide to put her budding romance with Batwoman on ice for the good of both women, makes for a far more mature and believable showcase of the challenge behind being a lesbian in a place like Gotham City especially, compared to the more juvenile attempts at this storyline that Batwoman has presented beforehand. Kate once again having to walk away from her own true love is equally challenging, even if Kate can at least keep her Batwoman identity busy by chasing Duela Dent, this week’s latest criminal quarry.

Duela Dent has had a couple of incarnations in DC Comics lore, with the first being a daughter of Two-Face, and the second being an insane woman who claims to be the offspring of various recognizable Batman villains, starting with the Joker. In the case of the Arrowverse, Duela is actually revealed as Harvey Dent’s niece (interestingly, Harvey is also an un-scarred assistant district attorney at this point in the Arrowverse timeline, suggesting that not only did Batman never encounter Two-Face in this universe, but that Harvey Dent still has yet to become Two-Face at this point!), but the relevant point is that she’s a scarred twentysomething psychopath who is carving the faces of recognizable Gotham City influencers, as some form of revenge for her mother’s poor treatment of her. It’s another trite and lame portrayal of a villain that’s much more interesting in DC Comics lore, but at least the Joker’s Daughter Easter eggs throughout this episode are cool, as is Alice literally ‘stealing’ Duela’s face after Kate takes Duela down, in order to get the drop on Cartwright. 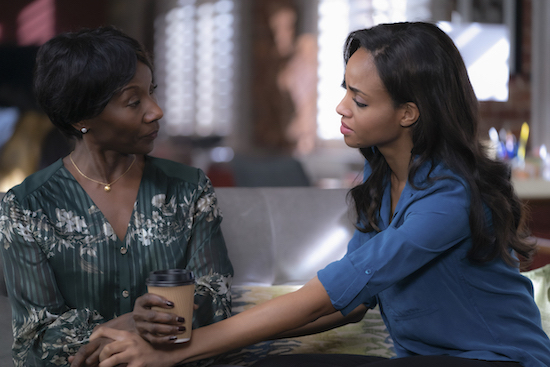 If there was one interesting element to Duela’s character during her Batwoman debut, it’s the fact that she was a former patient of Cartwright’s, after carving a smile-like scar into her own face as a teenager. Since she didn’t consent to Cartwright’s corrective procedure, Duela gives Alice her own face so that Alice can grab Cartwright, pull off his mask (apparently, the Campbell disguise isn’t even plastic surgery, and merely a very convincing face mask), and demand the whereabouts of Mouse. Oh yeah, Mouse has also been forcibly confined by Cartwright, and the episode ends with Mouse being pumped with a face full of Fear Gas! This is actually another interesting tease, since it flirts with the idea that Mouse, whose real name is, “Jonathan”, may actually end up becoming the Scarecrow of the Arrowverse, especially since Batwoman could easily explain that Jonathan’s mother had the last name, “Crane”, instead of his father. Granted, this makes one wonder how the Fear Gas would have originated in the Arrowverse in this case, but it’s not outside the realm of possibility that someone else could have invented it, and Mouse could easily perfect and weaponize it.

Arguably the most interesting element of this episode however is a subplot with Jacob. This subplot unfolds after the inmate that saved Jacob from Dodgson at Blackgate asks for his favour in this episode, specifically getting a trial moved up. This is fair enough, but the real interesting tidbit comes when the favour ends up tipping Jacob off to evidence that Lucius Fox’s murder may have been staged, and worse, someone within the Crows may have destroyed evidence from it. This presents a very promising conspiracy that will eventually spill over into Luke’s and Kate’s Batwoman operation, no doubt. It also provides a solid excuse for Jacob to try and mend fences with Sophie, now that Jacob can’t trust anyone in the Crows.

Finally, Mary bumbled around some more this week, though despite the show wanting to address Alice saving Mary’s life during the battle against Nocturna, and Mary deducing Kate’s secret identity, nothing is really done with Mary’s character here, and she simply ends up being wasted in this episode. Mary’s character is at least starting to be portrayed a lot better than she was when this show started, but her place in the ensemble still feels like it’s too inconsistent. Regardless, despite its busy array of subplots, “Grinning From Ear to Ear” did present a worthy amount of compelling story material, foreshadowing some interesting new mysteries, and some exciting new villains to come for the Arrowverse’s Gotham City. Even Kate’s and Sophie’s romantic drama was handled far better than usual here, despite Duela Dent being yet another underwhelming villain-of-the-week. Still, I’ve almost come to expect that the Arrowverse will treat its DC villain table scraps like a virtual afterthought by this stage, so I can’t say I’m surprised. Hopefully Duela gets a better villain turn down the road though, especially when her more famous uncle has yet to embrace his own criminal identity on Earth-Prime.

Batwoman 1.14: "Grinning From Ear to Ear" Review
Batwoman delivers a busy, but fairly solid episode this week, setting the stage for some interesting new mysteries, while Kate and Sophie try to untangle their complicated feelings for each other.
THE GOOD STUFF
THE NOT-SO-GOOD STUFF
2020-03-08
78%Overall Score
Reader Rating: (0 Votes)
0%