Like The Flash, Legends of Tomorrow has ended up having its production schedule quickly disturbed by the ongoing COVID-19 pandemic. This means that next week’s planned episode has now been pushed back to April 7th, alongside the next new episode of The Flash (Batwoman’s and Supergirl’s schedules are so far unaffected), though in the case of Legends of Tomorrow, this actually ends up working out far better than you would think. You see, this week’s episode, “Romeo v Juliet: Dawn of Justness” actually marks the farewell episode for Brandon Routh and Courtney Ford, both of whom have now exited the series. Better still is that this episode ends up being a highly entertaining, clever and meta last hurrah for the newly-minted Mr. & Mrs. Palmer, leaving Legends of Tomorrow to start its unscheduled two-week hiatus on a surprisingly poignant and emotional note.

“Romeo v Juliet: Dawn of Justness” even sidelines the Legends’ Encore mission entirely, in favour of a surprisingly easy mission to England, 1594, in order to seek out the first piece of the Loom of Fate. Apparently, Charlie disguised the first Loom piece as a ring, which she gave to none other than William Shakespeare! This leads to Ray being disappointed that his final mission with the Legends is disappointing and anti-climactic, while also struggling to tell Nate that he and Nora will be leaving the Waverider after this mission. This angst over Nate’s feelings is perhaps the only occasional sour note in an otherwise sublime Legends of Tomorrow episode though. While acknowledging that the awesome bromance between Ray and Nate has to now end is undeniably painful (even though Behrad’s and Nate’s friendship seems like a pretty easy replacement for the time being), some of the emotional rhetoric being spouted about growth and change, as if Nate and Ray could never see each other again as grown-ass adults, does feel a little… ‘High school’, for lack of a better term. Sometimes, a little too much CW writing does creep in here. 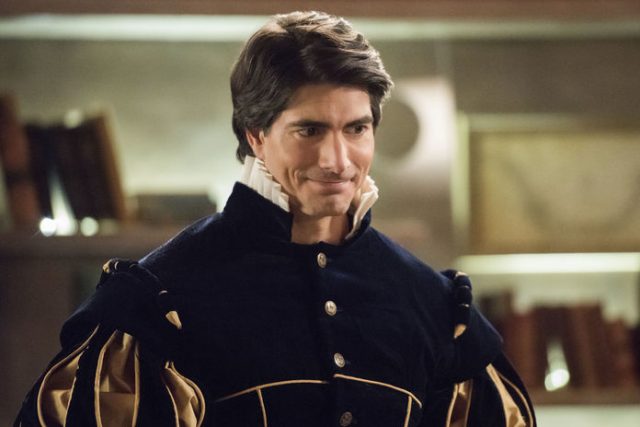 Still, the show deftly took the opportunity to deliver an especially cheeky and meta episode here, right down to the characters poking fun at the series’ DC license, its over-the-top nature, and even The CW as a whole! It doesn’t totally add up from a credibility standpoint, but given the anxiety-inducing circumstances in the real world right now especially, this extra fun and zany Legends of Tomorrow episode really couldn’t have come along at a better time, even considering that we have to say goodbye to Ray and Nora. Even temporarily losing the Encore-of-the-week format proved to be beneficial here, allowing Legends of Tomorrow to quite literally throw a big goodbye party for Ray and Nora, with the men and the women separated into their own storylines off and on the Waverider, respectively, save for Charlie, who tags along with the guys instead.

As much as the women’s’ ‘Book Club’ inevitably turns into a booze-laden after-the-fact bachelorette party for Nora however (Mona even comes along for the fun!), complete with an un-explained fireman stripper, the guys’ drunken shenanigans eventually disturb the flow of history, after they wield their superhuman abilities at Shakespeare’s tavern, and ultimately fail to mind-wipe him, due to being intoxicated. The fallout results in Shakespeare completely re-writing perhaps his most famous and beloved play, Romeo and Juliet, as a superhero-themed story, complete with plans for limitless sequels and crossovers. This eccentric plot device is then used for Shakespeare to confront having to say goodbye to two characters he especially loves, which is in turn nicely reflected through the team, particularly Nate, having to come to terms with letting Ray go.

Sure, it’s more than a little hypocritical that this message is being spouted by The CW of all networks, a TV outfit that now actively refuses to let its most popular brands go, and just keeps trying to perpetually spin them off into new shows forever. Hell, the Arrowverse is one of the worst offenders for this, considering how over-crowded it is now, while still trying to add more new shows to itself! Considering that the DC Universe has never truly taken a break since the 1950’s to boot, if you don’t count its forerunners that have existed since the 1930’s, it also feels a little bit weird for this episode’s meta stylings to start suddenly talking about letting characters go and giving them a definitive ending, something that DC will clearly never do at this rate. In the end though, that feels like a nitpick when you remember that Brandon Routh’s Ray Palmer has existed in the Arrowverse since 2014, with Routh having an even bigger connection to DC overall, since he played the title role in 2006 movie, Superman Returns. The actual farewell commentary with Ray at least lands, even if some of the meta humour is a little inconsistent regarding how we should view DC and The CW endlessly pushing their popular brands (though, as a DC fan, far be it from me to complain about always having a steady supply of DC, in fairness).

The Legends fixing history by putting on their own performance of Romeo and Juliet, with some help from Gideon, does feel like a sweet rebuttal however, possibly suggesting that, while relationships change and the world changes, it’s also true that some stories and characters endure, and inevitably receive new interpretations that keep them relevant throughout history. That certainly does apply to DC, a whole lot more than The CW, in my opinion. Still, with Ray and Nora getting the fun, emotional farewell they deserve, Mona helping to inspire Mick to connect with his newly-discovered daughter, and the first piece of the Loom of Fate having been found, even at the cost of Astra learning what the Legends are looking for, “Romeo v Juliet: Dawn of Justness” delivers by far this season’s best Legends of Tomorrow episode to date!

This is why it’s a strangely fitting point for Legends of Tomorrow to take an unscheduled break. While it’s unfortunate that the ongoing issues with COVID-19 have predictably disturbed The CW’s current best ongoing DC show, perhaps giving fans an extra couple of weeks to get used to the idea of the Legends’ roster being down two members is a blessing in disguise. Indeed, it’s tough to say goodbye to one of Legends of Tomorrow’s OG heroes in particular, with Ray having been on the Waverider since its mission first began in 2016, but, “Romeo v Juliet: Dawn of Justness” made sure that Ray’s exit was a superb one. We didn’t even need an Encore this week, in fact, with Legends of Tomorrow instead successfully going all in on giving Ray and Nora one last big, tongue-in-cheek blowout, complete with some amusing unintended consequences for William Shakespeare. As annoying as it is that we’ll have to wait a couple of extra weeks for the team’s post-Ray adventures to start, we couldn’t have asked for a better final bow for one of the most enduring faces of the Arrowverse, and DC media at large.

Legends of Tomorrow 5.7: "Romeo v Juliet: Dawn of Justness" Review
Legends of Tomorrow provides a fun, fitting and emotional farewell for Ray and Nora this week, along with some crazy consequences for William Shakespeare.
THE GOOD STUFF
THE NOT-SO-GOOD STUFF
2020-03-21
94%Overall Score
Reader Rating: (0 Votes)
0%