As if Barry’s diminishing speed and the death of the Speed Force itself wasn’t enough of a problem, Eobard Thawne has made a return, now lingering as displaced energy within the body of Nash Wells. Thus, the race is on to extract The Flash’s arch-nemesis from Nash, and this serves as the core storyline behind the aptly-titled, “The Exorcism of Nash Wells.” At the same time, a new light-based metahuman in service to Black Hole also makes an appearance here, as the next phase of Eva’s mysterious plans are kicked into motion.

The Flash is in a bit of a weird spot right now, since it seems like the series has been hit especially quickly by fallout from the ongoing COVID-19 pandemic, even compared to sibling shows like Batwoman and Supergirl, which so far haven’t had their schedules altered (although filming has temporarily ceased on them as well). The Flash’s sudden stop in production has thus left this week’s episode as one of the last produced before work on the series was halted, with the episode planned to air next week now being pushed to April 7th, presumably to complete stalled post-production work. This means that, “The Exorcism of Nash Wells” now has to serve as a major story drop-off while viewers wait a couple of extra weeks, and on that note, it’s a little bit wanting. Of course, this isn’t to say that this episode is bad. It just clearly wasn’t meant to serve as a stopping point for The Flash, and that sometimes undermines the narrative momentum, even though this certainly isn’t the showrunners’ fault.

Regardless, the actual ‘exorcism’ of Nash is decently-executed, though it also runs into another problem that’s independent of COVID-19; Crisis on Infinite Earths. You see, the crux of Nash’s character evolution here is based around Nash facing death and loss, specifically of Maya, the doppelganger of Allegra that’s been alluded to several times now. The problem with this however is that Nash has already been put through his destructive paces as Pariah during Crisis, having witnessed the deaths of untold numbers of universes, and Maya/Allegra doppelgangers. Thus, it’s hard to really buy that the key to expelling Thawne involves Nash simply owning up to Maya accidentally falling to her death (presumably) on Earth-13, during an extraction of some mysterious ‘memory cells’. This pep talk solution (take a shot) just dips too far into ‘CW writing’, frankly.

Fortunately, there are some solid ideas still achieved through this storyline, namely Thawne exploiting Team Flash’s friendship with Nash to get free of the Pipeline, Team Flash using the old anti-Thinker technology to dive into Nash’s mind with the help of Cecile, and Nash simultaneously taking in the lingering spirits of every Wells doppelganger from the old Multiverse. This could be a strong way to bring important Wells personalities like Harry back to the show, whenever the story deems it necessary, something that Cisco also appears to imply before Nash makes his exit from S.T.A.R. Labs, having been inevitably freed of Thawne. Of course, Barry and Cisco also acknowledge that Thawne will eventually return, because of course he will. I guess the Arrowverse just isn’t bothering to pretend that Thawne will ever be permanently destroyed anymore, something that this DC canon should have come to terms with a while ago.

Even if the cheesiness behind the Nash exorcism doesn’t always work however, there is nonetheless another, more interesting threat to Central City this week, after a new metahuman-of-the-week starts going after a piece of tech at Mercury Labs. As it turns out, this tech was sold to Mercury Labs by McCulloch Technologies, and Eva happens to have invented the gizmo in question, which can apparently turn light into energy. Having now created a fake Kamilla, after the real Kamilla was hit by the Mirror Gun wielded by the phony Iris, Eva then charges ‘Iris’ and ‘Kamilla’ with retrieving the device before it can be transferred to A.R.G.U.S. Joseph, however, is undertaking his own measures with Black Hole, having summoned yet another light-based metahuman assassin, Sunshine, an all-new villain that doesn’t actually exist in DC Comics lore.

Sunshine is actually a pretty interesting threat, having the ability to turn invisible in direct sunlight, as well as burn anyone that she touches. Compounding the challenge here is that Barry has to ration his speed, leaving Frost and the CCPD to primarily try and deal with Sunshine on their own. Barry got to learn a good, hard lesson here too, after he attempts to use Velocity to give himself artificial speed, only for his body to reject it, and leave Frost badly burned as a result, before Sunshine is forced to retreat. Some quick thinking at the actual CCPD building does lead to Sunshine being trapped in a dark room and successfully apprehended though, nicely proving that Barry doesn’t need his powers to be a hero. Sure, it’s a lesson that the show has touched on before, but it’s always nice to be reminded, especially with Barry now being faced with the prospect of potentially having to permanently give up his mantle as The Flash. 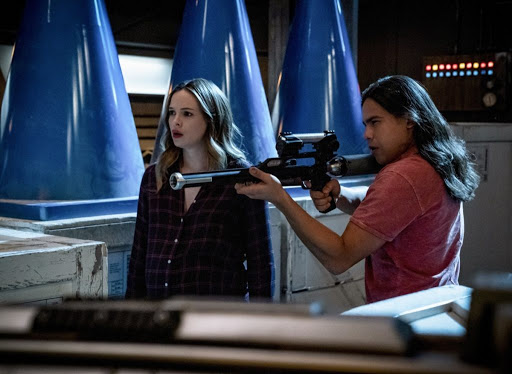 On that note, if there was one benefit that the mess with Thawne in particular allows Barry and Team Flash to mull over, it’s Thawne’s attempt to upset Barry by mentioning the late (or is that ‘temporarily lost’?) Nora. This inspires Barry to consult Nora’s journal for information as to how to build an artificial Speed Force. It’s a fair enough lead for next week’s episode, but as I said, next week’s episode has now been pushed to April 7th, leaving The Flash dangling on a pretty awkward cliffhanger, even though I do understand that it wasn’t supposed to be a stopping point. I suppose waiting two extra weeks for a new episode is better than no new episodes, indefinitely though, and indeed, “The Exorcism of Nash Wells” is certainly good enough through most of its execution. The extraction of Thawne itself feels disappointingly weak, as does Nash inexplicably having to face more loss after he’s already been put through the highest-possible ringer as Pariah, but Black Hole and Eva are fortunately picking up the slack very nicely. We’ll have to wait a bit longer to see what Eva wants with her refractor device, but now that there’s another fake being planted in Team Flash, Barry and his friends are about to lose even more resources than The Flash’s precious speed!

The Flash 6.15: "The Exorcism of Nash Wells" Review
The Flash delivers a rather mixed 'exorcism' of Thawne this week, though Eva and Black Hole manage to create more consistent, interesting threats.
THE GOOD STUFF
THE NOT-SO-GOOD STUFF
2020-03-20
84%Overall Score
Reader Rating: (0 Votes)
0%