It’s about time that Mike finally had something interesting to do during Better Call Saul’s current season, but at long last, we’ve gotten there. Even then however, the show’s criminal storylines once again took a backseat to more shenanigans with Jimmy, despite, “Dedicado a Max” finally also giving us a worthy new scenario for Mike’s character. This episode does have the show spinning its wheels a tad, especially when the story doesn’t truly move to new territory this week, but it’s another fun episode that once again serves as a throwback to Better Call Saul’s more dark comedy-driven early episodes, particularly as Jimmy does everything in his power to allow Acker to keep his land.

The opening montage of Jimmy’s schemes is very funny stuff all around. Jimmy and Acker team up to do everything imaginable to stall Mesa Verde, complete with falsely changing Acker’s mailing address, declaring faulty land deeds, dropping lithium particles around the fence, and even spray painting an image of Jesus on the side of Acker’s house, thus attracting a huge crowd of religious tourists. The way that this sequence is directed is truly sublime as well, with Kim handing off the paperwork headaches caused by Jimmy (and indirectly by herself), to various subordinates at Schweikart & Cokely, all in the name of Kim refusing to abandon her principles and her client. It’s all very amusing, and weirdly inspiring. This strangely successful scheming continues to have Jimmy’s influence paying law-bending, but so far altruistic dividends in the best way, and it’s so satisfying to watch. 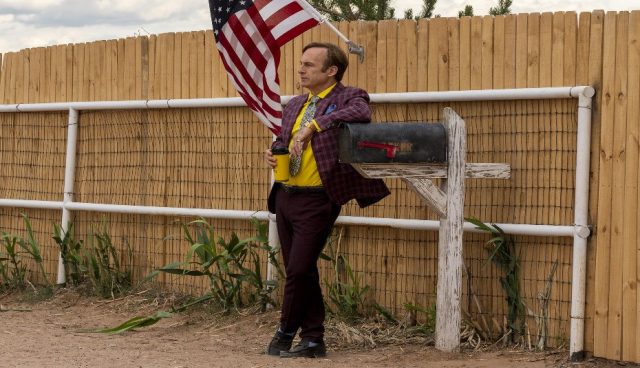 Yet in the end, this show’s subtle air of character tragedy nonetheless continues to creep in. This is wonderfully exemplified through Kim’s character, once her schemes with Jimmy ultimately fail to stop Mesa Verde’s construction plans. Even Jimmy tries to talk Kim down from further stalling of the call center, but is surprised to hear that Kim is determined to take this fight all the way to the top, even if it gets personal and ugly with Kevin. It remains compelling to see Jimmy’s shady influence continue to ebb at Kim’s own moral compass, which I’m still anticipating will ultimately result in a permanent rift between these characters. Like I’ve continually said, there has to be an explanation for why Kim doesn’t appear on Breaking Bad.

For all of the fun and games with Kim and Jimmy however, it does ultimately amount to a diversion, one that anticipates viewers coming back next week, since the ultimate payoff is that Rich suspects Kim being treacherous, but can’t yet definitively prove it. Fortunately, the intrigue was also quite high with Mike this week, and it’s about time that Mike finally served a purpose in the plot, even if said purpose also remains very mysterious. Said mystery is nonetheless interesting however, beginning when Mike wanders around his unknown new location, which appears to be a small ranch just inside Mexico. The ranch residents don’t appear to speak English either, further compounding the mystery as to how Mike ultimately survived his beating from those street thugs. 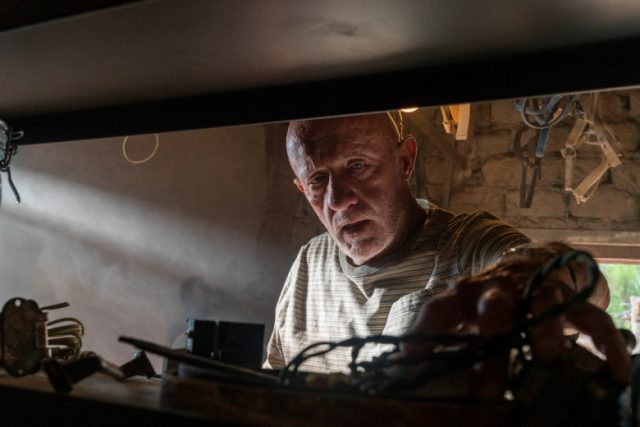 Inevitably though, Fring is behind Mike’s ‘vacation’, with Fring financing the entire recovery regime himself, as well as the entire ranch, apparently. This is ultimately to further an agenda that Breaking Bad fans already know will inevitably be successful, namely Fring recruiting Mike as his fixer for a coming battle against the Salamanca cartel, as depicted on Breaking Bad. Mike continues to try and turn down the proposal, but Fring manages to seemingly get through to Mike in the final seconds of this episode, claiming that Fring wants to recruit Mike because he understands a need for revenge. It’s great that Better Call Saul is finally moving Mike towards his inevitable destiny with Fring, and considering the hints throughout this episode, I’m guessing that Fring’s brother, Max was probably killed by the Salamanca’s at some point, as also hinted in the episode’s title. That’s speculation on my part, but it would certainly explain why Fring has put so much effort into maintaining a small Mexican ranch, with a foundation dedicated to the mysterious, “Max.”

The writing and characterization remains sharp as ever in, “Dedicado a Max”, but I do wish that Better Call Saul had found a more interesting way to proceed this week’s storyline, rather than going in circles with diversionary tactics. Still, it’s tough to complain when the series remains this cheekily entertaining, even if Jimmy’s and Kim’s efforts to stop Kevin are ultimately fruitless, as is Rich’s effort to slow down Kim. Even a relatively fun, if brief return for Steven Ogg’s Sobchak, a one-off character from this show’s very first season, doesn’t feel totally utilized to its full potential, even if it does appear to give Kim some sort of decisive weapon to wield against Kevin and his construction project. Jimmy’s ascension into the role of Saul Goodman, and all in its orbit, continues to override all of the criminal storylines at this point, but the show’s balance is improving here, thanks to Mike finally having something more to do than bumble around, depressed. Now that Mike is finally out of excuses not to ally with Fring as well, perhaps the criminal underworld of Albuquerque can once again make a big splash in the coming weeks.

Better Call Saul 5.5: "Dedicado a Max" Review
Better Call Saul spins its wheels a bit too much this week, but improvements in Mike's storytelling, along with a fun core plot between Jimmy and Kim, nonetheless keep the show engaging.
THE GOOD STUFF
THE NOT-SO-GOOD STUFF
2020-03-20
85%Overall Score
Reader Rating: (0 Votes)
0%