NOTE: Some spoilers for the first season of, “The Umbrella Academy” may be present in this review. That said, the review is written to accommodate those who have not yet watched the season, and as such, will avoid discussion of major story developments.

Now that Netflix’s lucrative Marvel deal is a thing of the past, the world’s biggest streaming platform is in dire need of new superhero shows to call its own. Some of these shows have taken the form of alternative, family-driven projects that merely carry superhero themes, namely I Am Not Okay With This and Raising Dion, but in terms of more openly off-the-wall superhero storytelling, Netflix has instead turned to a cult favourite series of graphic novels from Hellboy and Sin City comic publisher, Dark Horse Comics. Enter The Umbrella Academy, a pitch that combines dysfunctional family melodrama with an almost manga-flavoured, topsy-turvy world that’s full of innately ridiculous characters, from sentient chimpanzee butlers to mascot head-wearing assassins that work for an organization dedicated to policing time travel. This weirdness is then headlined by a team of former child superheroes that exist as some sort of twisted fusion between Marvel’s X-Men and DC’s Doom Patrol.

It sounds delightfully bonkers, and indeed, when The Umbrella Academy commits to its over-the-top absurdity, it shines as a uniquely-flavoured superhero series that provides another distinct, highly entertaining addition to Netflix’s lineup of original genre shows. That’s why it’s too bad that the series only partially commits to said absurdity, at least in its first season. Instead, The Umbrella Academy sometimes gets lost in its own strange self-seriousness, as if the show occasionally becomes oblivious to the fact that its lead characters are retired superheroes born from a wave of mysterious pregnancies on the same day in 1989, who used to wear school uniforms and domino masks, and fight crime under the leadership of their domineering, eccentric adoptive father for… Reasons unknown. That’s part of an over-arching mystery that this debut season eventually addresses, but the pacing does sometimes leave a bit to be desired. 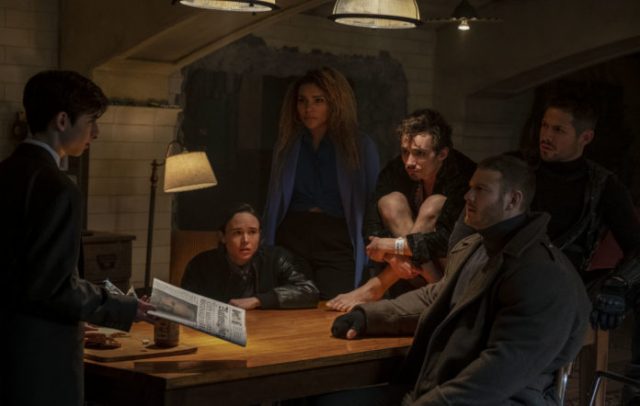 Fortunately, The Umbrella Academy’s main hook makes for an effective, offbeat mystery, one that justifiably requires the reunion of the estranged Hargreeves family; The world is going to end in seven days, as confirmed by long-lost time-traveling sibling, Number Five, played by Aidan Gallagher, and this return by Number Five also happens to coincide with the mysterious death of the siblings’ adoptive father. Oh, yeah, the so-called ‘Umbrella Academy’ were known to their adoptive father, Reginald Hargreeves (played in a standout supporting role by Colm Feore), merely by numbers, with their actual names instead supplied by their adoptive mother, Grace (played by Jordan Claire Robbins), who also happens to be an android that’s modeled after an idealized 1950’s housewife. Because why not? Number Five never got a name, presumably because he went missing at a young age, after a botched attempt to time travel. This is how Five learns about the coming apocalypse, and why he subsequently spends literal decades trying to get back to warn his family, only to be trapped in his thirteen-year-old body as a fifty-eight-year-old man upon successfully doing so. You see why The Umbrella Academy sometimes has issues nailing down its tone?

In any case, the other siblings, and lead characters, of The Umbrella Academy are, in order of their numeration; Tom Hopper’s Luther Hargreeves, a.k.a. Spaceboy, a large, ‘boy scout’ type with super strength and a huge frame, David Castaneda’s Diego Hargreeves. a.k.a. The Kraken, a tough, uncompromising vigilante with the ability to curve anything he throws, Emmy Raver-Lampman’s Allison Hargreeves, a.k.a. The Rumour, the sole female member of the team, who has the power to make anyone do whatever she desires when she prefaces a verbal command with the phrase, “I heard a rumour…”, Robert Sheehan’s Klaus Hargreeves, a.k.a. The Seance, a drugged-out, aimless vagrant with the power to commune with and summon the dead, Justin H. Min’s Ben Hargreeves, a.k.a. The Horror, a deceased sibling who had the power to conjure an eldritch, tentacled monster from his body, and is spiritually connected to Klaus, and finally, Ellen Page’s Vanya Hargreeves, the one non-powered member of the siblings, who became ostracized by her family after writing a tell-all book about them. There’s a ton of family dysfunction to unpack with the Hargreeves clan, but that is admittedly a big part of the engagement behind this series, especially when every Hargreeves sibling is impeccably cast and performed. 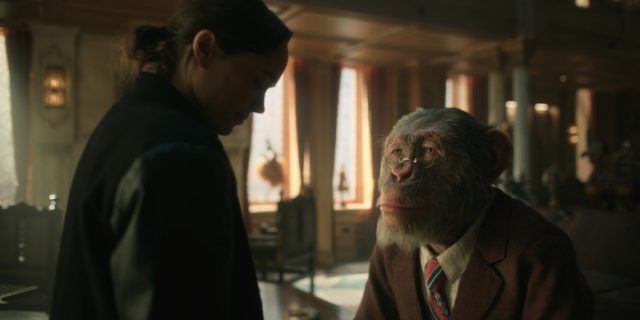 Some may initially be disappointed that these retired superheroes are not exactly complemented by super-villains, at least not in Season One, but the ticking clock behind the apocalypse provides more than enough of an obstacle on its own. Number Five’s efforts to warn his siblings of the world’s imminent destruction still aren’t without consequences however, and those consequences primarily come in the form of Hazel and Cha-Cha, played by Cameron Britton and Mary J. Blige, respectively, those aforementioned mascot head-wearing assassins that work for a mysterious time policing organization, headed up by Kate Walsh’s unnamed ‘Handler’. Hazel and Cha-Cha must terminate Five with extreme prejudice, but they have their own dysfunction to contend with, namely Hazel’s increasing dissatisfaction with his job, and Cha-Cha’s eternal obsession with results. This makes the antagonists just as kooky and messed up as the protagonists, in theory anyway, which can lead to some more solid moments of fun, even if the drama remains a little more mixed with these opposing characters.

In fact, despite the compelling mystery behind the coming apocalypse and how it may ultimately be triggered, the real mystery behind The Umbrella Academy is why it feels the need to pad itself out with so much overblown character drama. The series might have benefited from a reduction in its ten-episode order for Season One, since the genuinely interesting, exciting plotting could have very easily been maximized across eight better-paced episodes, rather than ten episodes that sometimes suffer from sluggish pacing. Still, even if there are moments where viewers will inevitably get ahead of the show’s storytelling, with the characters throughout the series sometimes struggling to catch up while bickering about the same old nonsense, The Umbrella Academy still hits more often than it misses. This is especially apparent during the handful of action scenes, which aren’t as frequent as they deserve to be, but never fail to impress nonetheless, carrying a frenetic, unhinged violence that’s still amazingly kept in TV-14 territory, even as some baddies can sometimes meet a particularly brutal demise at the hands of our ‘heroes’.

I’d also be remiss not to mention the fact that The Umbrella Academy is proudly embracing a recent staple of certain anti-hero-flavoured comic book adaptations, such as Marvel Studios’ Guardians of the Galaxy movies, and DC Films’ Suicide Squad or Birds of Prey, specifically an eclectic soundtrack of both well-known and lesser-known pop songs that play over key moments in the story, particularly moments of action and mayhem. This sometimes feels like it’s simply done to inject a little more flavour into action scenes and dramatic beats that would otherwise feel a little more by-the-book, but The Umbrella Academy does sport an excellent soundtrack of licensed songs nonetheless. Whether it’s Tiffany’s, “I Think We’re Alone Now”, Toploader’s, “Dancing in the Moonlight”, Tom Swoon’s, “Shingaling”, or Heart’s, “Barracuda”, The Umbrella Academy makes the most of every licensed song selection, and the result is another standout anti-hero media soundtrack that’s just as enjoyable to pull up on Spotify as it is to listen to in the moment while watching this show. Fortunately, the original compositions, which heavily utilize violin and other string instruments with a bit of a rock-flavoured edge, are also fantastic, allowing The Umbrella Academy to thrive as a true musical tour de force, one that few viewers would likely expect it to be at first blush.

The Umbrella Academy is another highly ambitious, genre-flavoured Netflix Original Series that still has a few kinks to iron out after its first season, particularly with its tone sometimes being all over the place, but the show’s standout lead cast, sublime soundtrack and colourful, kooky world (which is especially amazing to experience in 4K with HDR, if your display and Netflix subscription plan happens to support those premium settings), still manage to deliver a unique, appealing gem that’s exceptionally poised to only get better in future seasons. The show’s long-confirmed second season still has no release window as of yet, and it may have been further stalled by the ongoing COVID-19 pandemic, if it didn’t manage to complete post-production in time, but The Umbrella Academy’s first ten episodes are still another promising antidote for so-called ‘superhero fatigue’, standing firmly apart in the crowded live-action superhero TV medium with their own uneven, but mostly enjoyable eccentric flavouring. Regardless of how long we ultimately have to wait, I’ll certainly be looking forward to my next series of misadventures with the Hargreeves family.

The Umbrella Academy: Season One Review
The Umbrella Academy's debut season doesn't always embrace its appealing weirdness as consistently as it should, but the series nonetheless stands as a creative comic book-inspired offering with tons of dysfunctional charm, and a killer soundtrack.
THE GOOD STUFF
THE NOT-SO-GOOD STUFF
2020-04-09
82%Overall Score
Reader Rating: (0 Votes)
0%