It’s certainly been a long lockdown for DC fans and Arrowverse enthusiasts. Most of The CW’s ongoing DC programming, alongside DC’s regular comic book publications and in-development movies, have all been halted for the past several weeks, due to the ongoing COVID-19 pandemic. Only DC Universe’s adult animated series, Harley Quinn, along with the streamer’s upcoming live-action drama series, Stargirl (which will also be co-hosted on The CW), appear to have been spared from DC’s indefinite shutdowns, due to their seasons already being completed before various entertainment industries ground to a halt for the foreseeable future.

Finally however, The CW has started to trickle out a few stalled episodes for their ongoing DC shows, likely before their respective seasons are presumably concluded earlier than anticipated. This begins with The Flash and Legends of Tomorrow on the same Tuesday night, and will continue with Batwoman this Sunday, before Supergirl finally makes a brief return at the start of May. “So Long and Goodnight” has been a long time coming for The Flash too, considering that it was originally scheduled to air on April 7th, before The CW pushed it back an additional two weeks, likely to avoid repeated waits between completed episodes that the network can still air. It’s great that we can finally watch new episodes of The Flash again for sure, but the bad news is that, “So Long and Goodnight” also happens to be a bit of a weaker episode for the series, particularly within a season that’s been far better than the last couple. 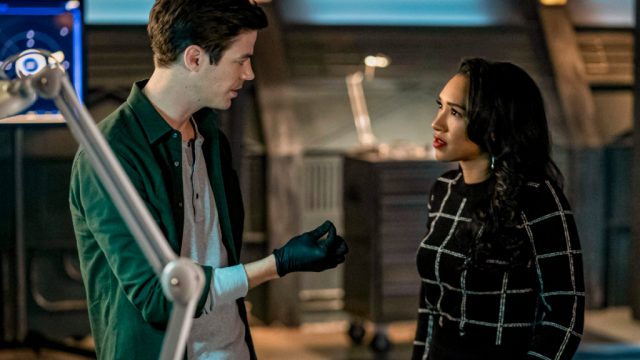 This episode does still get a few things right though, and chief among these is the growing menace behind Eva McCulloch. With Carver now taking increased action against Joe, now that the CCPD has successfully apprehended Sunshine, Eva exploits the opportunity to motivate ‘Iris’ to sub-consciously egg Barry on, and encourage him to inadvertently drain his remaining speed. This is actually a very devious plan, and one that makes excellent use of the phony Iris still existing within Team Flash. Eva’s even managing to keep her act up pretty well with the real Iris, who’s on the verge of finding a way to contact her husband in the real world, along with giving him a method of getting into the mirror world. I’m getting the sense that the real Iris will be free of the mirror soon, and that’s probably good, considering that this episode ends with some big new developments.

Those developments are mostly worth the wait as well, even if they come at the expense of the show having to bring back one of its lesser recurring villains. Carver’s plot to kill Joe stumbles straight out of the gate, right from the moment when he hires Rag Doll of all people, to try and carry out the dirty deed. On the one hand, this episode finally better establishes Rag Doll as a physical threat to Barry and his team, something that the villain’s prior appearances in the Arrowverse didn’t effectively do. On the other hand however, Rag Doll’s attempts to kill Joe, first by trying to crash his car while inside the engine, before coming out of a box in an interrogation room, only to run off with Sunshine and not kill Joe (Huh? How did he get away? Why did he not finish the job?!), are both stupid and contrived.

Even when Rag Doll finally steps up his game by snatching Cecile for the climax, after knocking Allegra and Nash around a bit (they might as well have not shown up in this episode), things don’t get much better. This whole plot turn essentially exists as an excuse to motivate Joe to go into witness protection, since Carver is now actively targeting him. The conflicts between Barry and Joe regarding Barry having to ration his speed, and the West family no longer being able to rely on his instant protection, are pretty solid overall, but Joe suddenly being forced into WITSEC also feels too abrupt. Perhaps this is another way that Jesse L. Martin can step away from the series for a bit (one that was ironically unnecessary to an extent, on account of the COVID-19 pandemic hitting before this episode even aired), because he’s apparently had some health issues since last season, but even so, Cecile being placed on a pressurized bomb that’s also timed, but has disguised wires, which Joe eventually gets himself onto before Barry arrives too late to save him, before Joe saves himself anyway- Yeah, it’s incredibly ridiculous, and that also hurts the otherwise interesting development of ‘Iris’ kicking Barry out of their apartment over Joe being in WITSEC. That seems a little counter-productive to her mission from Eva, but whatever.

Ralph, fortunately, manages to deliver a pretty decent, if disappointingly disposable subplot though, one that also sees Cisco briefly come along on another effort to corner Sue. Ralph’s been tracking Sue’s latest heists across several banks, and eventually, he manages to once again track her down in Central City. Even more interesting is that ‘January Galore’ was apparently Sue the whole time, as Cisco and Ralph eventually discover, once Sue gets access to the bank servers. Ralph does manage to expose Sue’s deception at an investment meeting shortly afterward, but so far, all this does is reveal that Sue is investigating Black Hole, which was already pretty apparent from a few episodes ago. Ralph’s and Sue’s rapport really is enjoyable, and these two characters do have some pretty superb chemistry, at the very least. They also deserve a more interesting storyline though, and they didn’t get nearly as interesting a subplot this time around.

“So Long and Goodnight” is certainly not the worst episode of The Flash to date, but considering that we’ve had to wait over a month for new episodes to start airing again, however briefly, it is a disappointing let-down for the series’ anticipated return. Rag Doll is at least a little more physically imposing this time around, but he’s still not really finding the right storyline in the Arrowverse, despite being one of The Flash’s oldest villains from DC Comics lore. The ineffectual Rag Doll storytelling not only makes Carver look less competent as a criminal mastermind, but also provides an unsatisfying excuse for The Flash to yet again bench Joe, likely for the rest of the season, at minimum. Fortunately, Eva helps to compensate for this by being a much better, more subdued villain presence, one that’s starting to strike at Barry in ways that he couldn’t possibly anticipate. Likewise, Barry having to confront his family members charging into danger, despite his diminishing speed, also makes for some great material, as does Ralph’s latest encounter with Sue, even if that deserved a bit more development. Luckily, The Flash is back with another new episode next week too, so hopefully we can return to Season Six’s usual higher quality at that point.

The Flash 6.16: "So Long and Goodnight" Review
The Flash finally returns with a disappointingly weak episode this week, one that yet again wastes Rag Doll, despite Eva continuing to impress as a looming threat.
THE GOOD STUFF
THE NOT-SO-GOOD STUFF
2020-04-22
67%Overall Score
Reader Rating: (0 Votes)
0%