Rick and Morty’s latest episode really says it all. This week’s offering is clearly an episode that the showrunners were very proud of, since it doesn’t even bother to follow the show’s usual titling format, and instead proudly declares itself, “The Vat of Acid Episode.” It’s small wonder to see why Rick and Morty is presenting this episode as such a distinct offering as well, since, “The Vat of Acid Episode” really does feel like one of Season Four’s best episodes, and especially one of its most memorable episodes as well!

This episode begins with Rick bringing Morty along on an exchange with some aliens, namely swapping some coloured crystals, which Rick promises couldn’t possibly go wrong. Sure enough, the exchange does quickly go wrong, necessitating that Rick and Morty fake their deaths within a fake vat of acid that Rick invented, in case they needed to escape. Morty is feeling extra impatient on this adventure to begin with, but the fake acid vat sends him over the edge, eventually prompting Morty to try and shoot the rest of the criminal aliens dead (before Rick has to intervene and do it successfully), before angrily losing it at Rick on the way back. This moment was made even better by the several references to previous Rick and Morty adventures too, suggesting that this tension between the eponymous characters has been building for a fair while.

The result of this spat eventually leads to Morty declaring to Rick that his ideas are always shot down, namely a video game save state-style device that allows someone to save their place in the real world, and rewind if they find that they’ve done something bad, thus erasing the consequences. Rick initially seems unable to invent this device, but eventually, he does exactly that, comically trying out its power by killing Morty, before verifying whether it truly works. This is a moment that perfectly sets the tone for this whole episode, as Rick deliberately doesn’t explain to Morty how the device works, despite also blaming Morty for his own over-enthusiasm with the gizmo later. Naturally, Morty does nothing good with his new god-like power to boot!

The climax of Morty’s montage of mischief eventually occurs once he meets an unnamed Asian girl. The two begin a romantic relationship, which follows the cliched milestones of every run-of-the-mill relationship, until Morty is forced to salvage it with a long trip abroad. During the trip however, the plane crashes in the mountains, and Morty and the girl are forced to survive along with some other passengers, after Morty loses the save state remote during the initial crash. The grueling journey to get it back is hilariously uncomfortable, as only Rick and Morty can be, but ultimately, everything is fine, and Morty finds true happiness with his unknown sweetheart… Until Jerry absent-mindedly picks up the save state remote and, thinking it’s a TV remote, accidentally sends Morty right back to the moment before he met the girl! This then results in Morty getting pepper sprayed, and being unable to salvage his lost relationship, due to accidentally saving his life state mid-pepper spray. This is brilliant, since it feels like appropriate just desserts for Morty, not to mention that it works exceptionally well as probably the funniest joke of this episode on its own merits, especially when we otherwise don’t see Jerry at all this week. 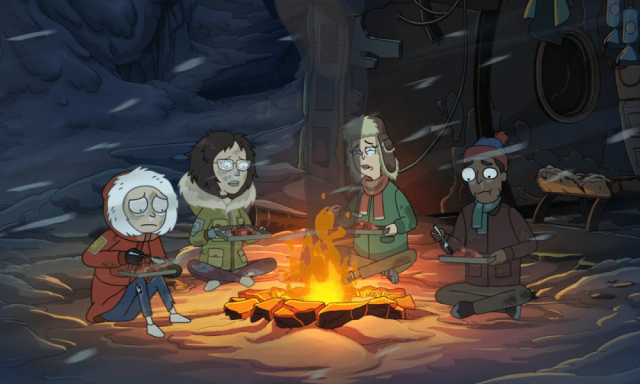 The real climax of this episode occurs soon after this however, when Rick reveals that every save state Morty loaded was actually Morty moving himself to another reality, and killing the Morty that originally inhabited each new reality he shifts to. After Rick then merges every theoretical parallel reality that Morty created in order to fix the situation, Morty ends up being cornered by everyone he pissed off while screwing with the save state remote, eventually forcing him to do the same thing that Rick did at the start of the episode; Hide in a fake acid vat to make people believe he’s dead. This is an incredibly funny monument to Rick’s egotism and spite, with legions of parallel Morty’s sacrificed, and Morty himself put through the physical and emotional wringer, simply so Rick could win an argument, and re-assert his scientific dominance over his grandson. It’s downright evil when you think about it, and this is exactly why Rick Sanchez is one of the handful of irredeemable villains that you keep coming back to with every new Rick and Morty episode, even though you know he’ll never truly change his ways.

That’s one of the cornerstones of deranged genius behind Rick and Morty, the fact that we punish ourselves with a show that we know pretty much deliberately ruins every happy thing in the universe, and is headlined by an unrepentant asshole alongside his ineffectual failure of a grandson to boot, and yet, we can’t get enough. “The Vat of Acid Episode” perfectly exemplifies the tragicomic splendour of Rick and Morty to sublime effect, reminding us again why Rick is an unrepentant villain, and why we keep coming back to him anyway. In a way, we, the audience, are the Morty’s of the equation, knowing that Rick’s adventures promise nothing but destruction and misery, and that’s what we come for, despite knowing it will make us feel shame. It’s a nihilistic loop that keeps coming back to coping with the evil, senseless things that happen in our reality, and why they’ll probably never stop. At the same time, Rick just doesn’t like to be wrong, and the lengths he’ll go to in order to be right spell certain doom for pretty much any conceivable reality. Would we have it any other way though? Probably not. Take your medicine, fellow Morty!