Harley Quinn’s otherwise pivotal episode for Harley and Ivy being a bit of a dud last week was quite frustrating. Fortunately, the show wisely allows the fallout from Ivy’s breakup with Harley to simmer a little more this week, leading to a much better episode, albeit one that once again leans more into the dramatic side of Harley Quinn. “Dye Hard” doesn’t completely sacrifice the humour that serves as a core component of this adult animated series, but like, “All the Best Inmates Have Daddy Issues” from a few weeks ago, this episode centers heavily around the darker subtext behind Harley’s failed relationships, particularly after she once again ends up in the orbit of the now-sane Joker.

After failing to convince Clayface and King Shark to party the night away with her, Harley finds herself unable to indulge in new distractions, after wanting to flee from the heartbreak caused by Ivy’s rejection of her. Ivy herself is actually absent in this week’s episode to boot, which is another smart decision for the storytelling, allowing the perspective of Harley to once again take center stage, as she finds herself alone, and trying to numb her pain. After crashing an upscale party at Wayne Tower, which just so happens to include the last bar in Gotham to not be ravaged by Parademons, still on the loose and attacking the city’s establishments after Harley initially unleashed them a couple of episodes ago, Harley then re-encounters the amnesiac Joker, now as a fancy bartender. Harley initially tries to flee again, but ultimately ends up being forcibly taken hostage with Joker, after several robbers invade Wayne Tower.

At the same time, Gordon is summoned to the roof of the GCPD precinct, with a promise by Batman to finally be able to use the Bat Plane!… Somewhat. As it turns out, Batman is still piloting the plane remotely, with Gordon simply sitting along, expressing boredom and frustration. This latest turn for the strained Batman/Gordon friendship is kind of funny at first, though disappointingly, it does lose momentum as this episode goes on. Instead, Gordon simply ends up serving as a convenient plot device, after noticing that Wayne Tower is under attack, and convincing Batman to land there. This occurs just in time for Harley to learn that an escaped Riddler is seemingly behind the robbery as well, which serves as a cover to grab a mind-enhancing helmet… For Doctor Psycho!

This is a fantastic payoff to Psycho walking away from Harley’s crew a couple of episodes ago, after Harley previously decided not to go through with her Parademon invasion. Now, with the help of Riddler, Psycho is able to mind control every Parademon in the city! All the while, Harley has to struggle to keep Joker from remembering his past life, after he’s forced to defend himself and face violence, which triggers flashes of Joker’s former memories. Harley does manage to stash Joker in the Bat Plane, but is nonetheless helpless to fend off Psycho’s newfound Parademon army, along with the super-buff Riddler. Things only get worse when King Shark and Clayface are hypnotized by Psycho as well, though due to the metal plates in his head, Sy is immune to Psycho’s mind control abilities. 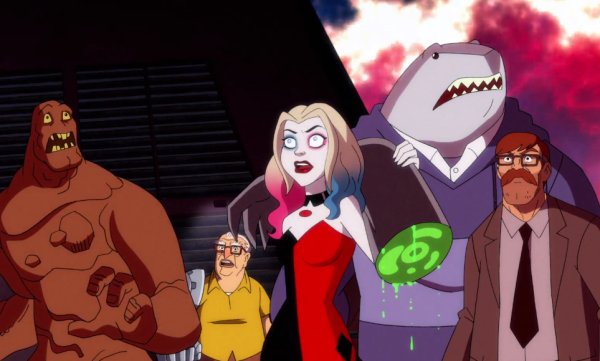 This sets up another shocking, but overall effective dramatic payoff to Harley having to confront the latest mess that she failed to clean up. Since Batman refuses to let Gordon fire missiles from the Bat Plane, leaving Harley’s remaining crew stuck in Psycho’s psychic barrier surrounding Wayne Tower, Sy opts to sacrifice himself to give Harley, Gordon and Joker a way to escape. Sy hasn’t been a huge part of the show lately, but it’s nonetheless bittersweet to see him charge himself with flammable oil and detonate himself for Harley’s getaway, allowing Harley to flee the scene with her life, albeit with King Shark and Clayface still under Psycho’s control for now. At this point, Harley correctly points out that she doesn’t have the power to stop Psycho in his current state, but another mention of a weird dream by Joker tips Harley off to the fact that the Justice League is still trapped in the Queen of Fables’ enchanted book!

Left with no other option, and yet more necessity when it comes to facing her mistakes and cleaning up her former messes, Harley is thus left to end this episode by pushing the amnesiac Joker into a chemical vat, likely bringing Joker back to his old self next week, so he can remember where the Justice League are hidden. This nicely punctuates a Harley Quinn episode that’s filled with some great dramatic payoffs, not least of which is Sy sacrificing his life, in order to give Harley a fighting chance against Psycho and Riddler. “Dye Hard” may be a little lighter on humour, but it’s nonetheless a big improvement over last week’s rather disappointing Harley Quinn episode, especially when it wisely leans into Harley’s reliable coping mechanism of trying to deal with her anguish by not dealing with it. The show has now effectively set up Doctor Psycho as a surprising new villain for this season’s climax to boot, leaving Harley’s own failures as a fledgling ‘queenpin’ of Gotham as the biggest threat to the city, and now, the world. This is a smart turn that dwarfs even the previous threats from Joker, hopefully promising to end Harley Quinn’s sophomore season with Harley finally having to overcome her mistakes, and accept her wrongdoing, if not truly repent from it.