NOTE: Some spoilers from throughout the fourth season of, “Rick and Morty” are present in this review

Rick and Morty has previously forced infamously long waits upon its fans for new episodes, but as of this season, it appeared that those waits may finally be at an end… Then the COVID-19 pandemic hit, and it once again seems like Season Five is going to take more than a year to premiere at this point, if supporting actor, Chris Parnell’s comments are any indication. For now though, Season Four of Rick and Morty has finally delivered the first new batch of adventures for its eponymous anti-heroes since 2017, split across two halves that saw five episodes drop for Fall 2019, while the remaning five aired throughout this past May. It’s an especially eccentric release schedule, but then again, Rick and Morty is by far the most acclaimed and celebrated series on Adult Swim at this point, and thus, it can pretty much dole out new episodes however it pleases.

Rick and Morty is incredibly aware of its own popularity after Adult Swim renewed the series for an impressive 70 episodes to follow Season Three as well, and that quickly became a focus in Season Four. Season Four’s premiere, “Edge of Tomorty: Rick Die Rickpeat” came out swinging at the show’s own reputation for toxic fandom, presenting Morty with destiny-controlling crystals, and presenting Rick with an unfortunate gauntlet through several hyper-fascist parallel universes, both of which ultimately led to the declaration that Rick and Morty won’t always do the logical, familiar thing, and fans will just need to accept that. Even after that however, the show did deliver some good, old-fashioned adventures for its titular leads this season, often with reliably destructive, squeamish results, while a good collection of new and old characters further lent themselves to more over-the-top, ridiculous intergalactic mischief. 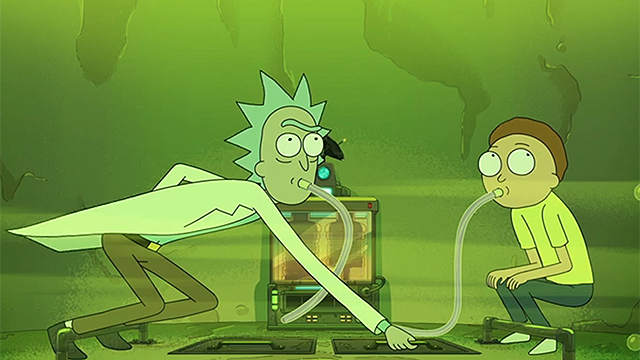 Rick and Morty’s kitchen sink approach is something that the series has always derived a lot of its self-aware humour from, and now, more than ever, Season Four took an especially empowered Rick, and unleashed him once again on a wave of unsuspecting dimensions and planets. This resulted in some real winning storylines for Season Four, with, “One Crew Over the Crewcoo’s Morty”, “Rattlestar Ricklactica” and, “Childrick of Mort” being particular highlights among episodes that took Rick, Morty, and sometimes the entire Smith family, to more bizarre, unpredictable new locations. On the note of utilizing all of the Smith brood to their full potential, midseason finale, “Rattlestar Ricklactica” is an easy highlight for this season as well, as Morty attempting to take pity on a failing snake society ends up delivering a rare time travel-themed cataclysm of sentient serpents, which is not only gut-bustingly hilarious, but truly has to be seen to be believed!

Even when Rick and Morty’s fourth season stayed earthbound however, it still delivered some pretty standout storylines. “The Vat of Acid Episode” is one clear offering that Season Four is especially proud of, for good reason. This episode finally allowed Morty to suggest his own idea for an invention, which eventually leads to doppelganger-massacring results, leaving Rick appearing to be right about shutting Morty out of his invention ideas. Morty ended up being particularly put upon throughout Season Four overall in fact, facing some of his greatest depths of misfortune at Rick’s side, which nicely culminated in a big blow-up between Morty and his grandfather during, “The Vat of Acid Episode.” Even then though, Season Four’s excellent finale, “Star Mort Rickturn of the Jerri”, ultimately ends with potent failure for Rick, especially as a family member, after it’s revealed that Rick actually did clone his daughter, Beth last season, and that the Smith family is all too happy to take in both Beth’s as their own, after Rick made sure that it’s impossible to determine which Beth is real, and which Beth is the clone. 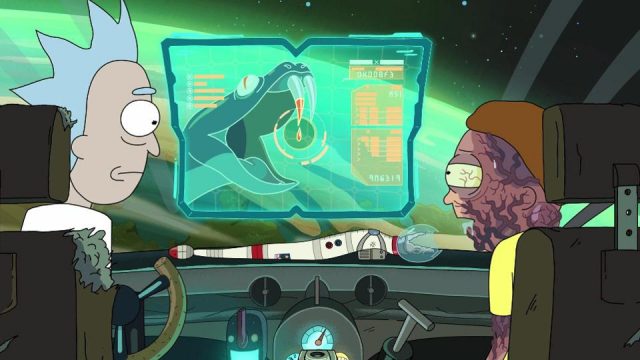 Season Four’s bold, risky style of character experimentation can lead to some great storylines, but it also doesn’t always pay off. While Rick and Morty’s fourth season is definitely an improvement over its good, but not great third season, there were still enough lesser episodes to hold Season Four back from fully recapturing the same incredible high points from Season One and Season Two. In fact, up until the climax of the season, every other episode throughout Rick and Morty’s fourth season seemed to diminish in quality to some degree, before the show often spectacularly rebounded the following week. “The Old Man and the Seat” may provide an interesting early tease of Rick’s eventual despair at the end of the season for example, but this episode’s humour just isn’t sharp or consistent enough to make the concept fully work. Likewise, the Alien-inspired parody behind, “Promortyus” starts to rapidly run out of gas towards its climax, along with not properly capitalizing on Summer finally coming along on another adventure. Thankfully, Summer is nonetheless put to much better use during some other storylines this season.

Season Four’s guest stars also proved to be something of a mixed bag, sometimes salvaging a few weaker episodes, while occasionally not contributing much to some of the highlight episodes. Among the best guest stars this season were Taika Waititi’s Glootie, an alien intern that leads to an invasion of monogamy-obsessed aliens after Jerry gives in to his demands to develop an app, Matthew Broderick as a talking cat that catalyzes the best Rick/Jerry subplot of the season in, “Claw and Hoarder: Special Ricktim’s Morty” (which is otherwise a bit of a low point for the season), and an all-too-brief re-appearance by Susan Sarandon’s Dr. Wong from the highly acclaimed, “Pickle Rick”, during the season finale. On the other side of things, Paul Giamatti as the Story Lord and Christopher Meloni as Jesus Christ didn’t contribute much of note to the otherwise good anthology evolution, “Never Ricking Morty”, other than a lot of comically uncomfortable jokes about, “Cum gutters.” 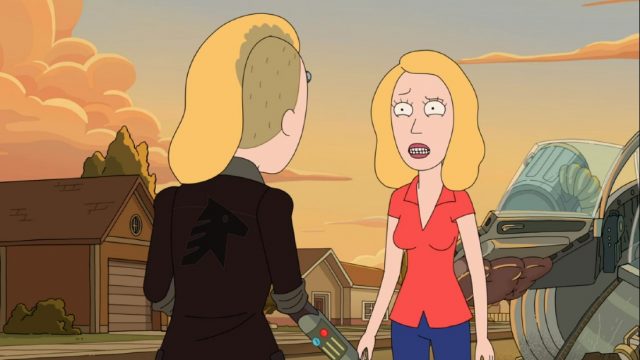 As entertaining as the guest stars of Rick and Morty often are however, the heart of the show’s supporting cast will always belong to the other Smith family members beyond Morty. This remains true in Season Four, even with diminished emphasis on Smith family storylines in many places. In fact, it’s not until the final two episodes of the season that the Smith’s get much of a chance to shine as a whole, outside of the aforementioned, “Rattlestar Ricklactica.” Summer in particular is too often sidelined in Season Four, as is Beth, who feels almost intentionally neglected this season, to preserve the big twist with her cloning during the season finale. Thus, it’s Jerry that predictably ends up headlining many of the best secondary Smith family storylines in Season Four, whether it’s his undertaking of an adventure with out-of-control gravity-defying shoes, accidentally ending up the leader of primitive, “Unproductives” on another planet, or living out his sub-conscious desire to be a water deliveryman. Even in a season that could often vary wildly in appeal with each passing week, Jerry remains a constant, aggressively mediocre comfort within an animated multiverse that just keeps making less and less sense.

Overall though, Season Four of Rick and Morty carries more successes than it does failures. Its especially bold desire to experiment with the show’s formula, including satirizing its own checkered reputation among the fans, often leads to several especially standout episodes, even if it also creates a few dud storylines with semi-regularity. The result however is still another mostly great season of Rick and Morty, one that once again sees the show evolving on an upward trajectory, rather than feeling a little burned out on its own reputation. Perhaps it’s logical then that Rick and Morty would confront its own reception so boldly in Season Four, declaring that its true fans will understand its cautionary message about the otherwise extraordinary Rick Sanchez, which becomes extra apparent off of the season’s surprisingly morose, downbeat conclusion for Rick. 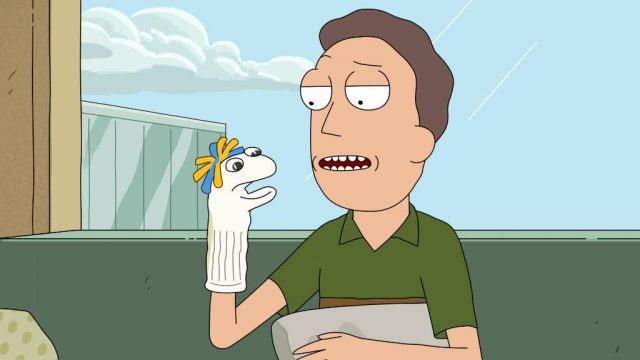 Rick and Morty’s renewed creative spark gives it an extra bold energy in Season Four, for better or for worse, and this heightened spark also effortlessly proves that the show is bound to keep getting more ambitious during the upcoming Season Five. Season Five’s release plan appears to have once again stalled a bit, due to ongoing complications from the COVID-19 pandemic, but hopefully, Adult Swim can eventually start fulfilling its promise of releasing new Rick and Morty episodes with more reliable regularity. For now though, I’m just going to look forward to what the gift of Space Beth can eventually give to this series, while jamming to some snake jazz, and doing everything in my power to forget about the anthology applications of cum gutters.

Rick and Morty: Season Four Review
Rick and Morty's fourth season is a little uneven in some places, but nonetheless represents an inspired boost for the series' creative ambition, one that's not afraid to boldly experiment with its reputation and formatting.
THE GOOD STUFF
THE NOT-SO-GOOD STUFF
2020-06-08
86%Overall Score
Reader Rating: (0 Votes)
0%