Stargirl has rapidly started to throw together its new incarnation of the Justice Society, leading to a bit of a sloppier episode last week. Fortunately, the show nicely rebounded this week, with a much tighter, better-focused episode, one that better capitalizes on the potential of Courtney’s new JSA. “The Justice Society” still feels like it’s rushing through some key story beats, particularly in regards to Pat, whose resistance to Courtney’s heroic efforts might as well have never happened at this point, but it’s good to see Stargirl back in strong form this week, especially when we finally get some more much-needed focus on whatever the Injustice Society is planning for Blue Valley.

This comes complete with a showcase for two more of the Injustice Society’s goons this week, who have weirdly been pushed to the sidelines until now. With Wizard dead, and Brainwave in a coma, Icicle decides to dispatch Sportsmaster and Tigress to strike at the new ‘heroes’ that have appeared in Blue Valley, luring them into a trap orchestrated by Gambler. Oh, and, shock of shocks, Sportsmaster and Tigress also happen to be Lawrence Crock and Paula Brooks, respectively, the parents of ultra-competitive Blue Valley High athlete, Artemis Crock. Yes, it’s predictable, even if you’re not an avid DC fan that would likely already know this. Still, Crock and Brooks make a nicely imposing, if slightly goofy first impression, murdering their daughter’s football coach early in this episode, simply because she was benched after punching out another player. Yeah, in fairness, this is about right for Stargirl’s cheeky, but infectiously wholesome tone. 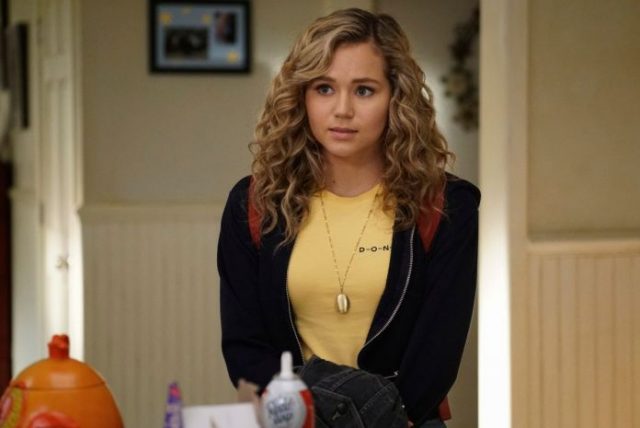 This controversial move nicely establishes Sportmaster and Tigress as loose cannons that the rest of the ISA aren’t necessarily fond of relying on. Nonetheless, the two make for worthy foes for Courtney’s budding new JSA, even if this doesn’t come into play until later in this episode. You see, Pat discovering Courtney’s ‘borrowed’ JSA artifacts at the end of last week’s episode certainly doesn’t go unchallenged, resulting in Pat demanding that Courtney get the old JSA costumes and gear back from Yolanda, Beth and Rick. Unsurprisingly, Courtney’s three friends are unwilling to give up their new superhero mantles too, citing improved purpose and a sense of belonging. Pat even fails to talk Rick down from hoarding his late father’s journal and hourglass, despite a well-meaning effort to impress upon Rick the dangers of abusing Hourman’s power, particularly after Rick already punched through his uncle’s truck!

After Courtney eventually musters up the courage to go along with her friends however, the four heroes find themselves closing in on Gambler, who is entering the next phase of the ISA’s mysterious plot. This actually provides more concrete hints of what the ISA may be planning, with Gambler making use of the satellite blueprints he got during last week’s episode, and hacking into a nearby satellite array owned by Empire Enterprises. While this name sounds fairly generic, it’s actually a very cool tease for future developments on Stargirl, since Empire Enterprises happens to be the company owned by Veronica Cale, a ruthless, highly intelligent human enemy of Wonder Woman in DC Comics lore. It’s also the company that births a more recent Wonder Woman antagonist from DC’s comic book universe, Doctor Cyber. There’s currently no evidence that Wonder Woman, nor any of her related characters, exist on Stargirl’s Post-Crisis Earth-2, but if the Justice Society eventually ends up against Veronica Cale and/or Doctor Cyber anyway, that could be very promising for potential future seasons! 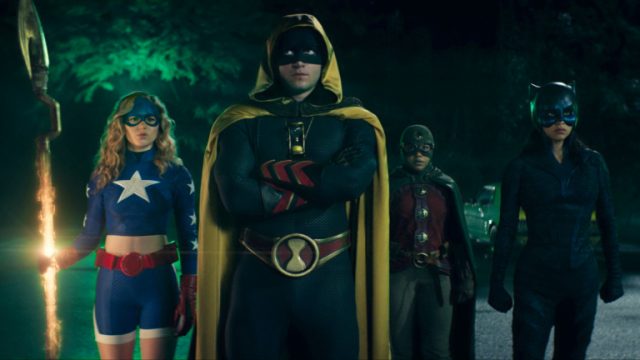 For now though, Courtney’s team is unsurprisingly tricked by Gambler, with the ‘hack’ occurring remotely, and the trip to the satellite base instead pitting Courtney’s team against Sportsmaster and Tigress, as I mentioned. The result is a rather ambitious climax for Stargirl this week, even if it does continue spotlighting some of the show’s slightly uneven action choreography. The fight between Wildcat and Tigress looks pretty well-realized, but Sportsmaster in particular feels dodgy, at least until he engages Courtney, which magically tightens the choreography, and makes it feel a lot less floaty and weird. Ultimately though, Pat lands in his S.T.R.I.P.E. rig, forcing Sportsmaster and Tigress to retreat, and in turn forcing Pat to concede that Courtney’s new team needs training, and that they’re determined to exist, no matter how Pat feels about it. The nice little moment of Courtney realizing Pat’s frustrations at failing to reign her in through her own failure to command her new team is a nice payoff for sure, even if Pat seemed to flip-flop on the whole ‘new JSA’ issue far too quickly, especially considering that his worst fears with Courtney’s new JSA practically come to pass already, during this scrap with Sportsmaster and Tigress.

Beyond the battles of the new JSA this week, there’s a solid spotlight on the rest of the Whitmore/Dugan family members in this episode as well, specifically when Mike starts struggling with family neglect during his science fair. This is a small, mostly inconsequential subplot, but it does nicely play into the growing amount of attention that Courtney and Pat are beginning to place on the ISA, and whatever sinister machinations are brewing in the background of Blue Valley. Not only that, but it also effectively sets up a more tight-knit bond between Barbara and Mike, who are inevitably going to be forced to be the non-powered supporting protagonists of Stargirl, even as Courtney’s and Pat’s rapport often proves to be one of the most appealing draws of this show. Likewise, we also get a proper look at Artemis Crock’s home life here, which is similarly small and inconsequential, but nonetheless starts hinting at homefront issues surrounding Artemis’ outwardly supportive, but inwardly strict, frequently absent ISA parents. This is very welcome, and continues to help further flesh out the ISA’s character development. This is also true of yet another small, but heartfelt scene in this episode, as the surviving Mahkent’s observe the birthday of their late wife and mother at a restaurant.

Little character moments like this often prove to be the heart and soul of Stargirl, even when the show’s battle against the ISA heats up, as it effectively did this week. “The Justice Society” finally allows both the JSA and ISA to gel more as respective teams, and as a bonus, we even get some pretty heartwarming scenes shared between Mike and Barbara, who are obviously completely oblivious to the ISA, and their presence in Blue Valley. Stargirl’s ensemble cast is starting to better hit their stride now, particularly with some more cool developments shared between Crusher Crock/Sportsmaster and Paula Brooks/Tigress here. Seeing these villainous spouses fight together as a deadly, perfectly-unified force of physical terror proves to be a delight, helping to compensate for some of the dodgy special effects that still plague Stargirl here and there. With better focus on the show’s villains this week, along with a full fleshing out of Courtney and her would-be hero friends as their own unit, Stargirl’s vision is starting to reach its true potential. Now that more pieces of the ISA’s plan are also falling into place to boot, hopefully the series can keep building this positive momentum over the next several weeks, so that Stargirl can truly join the splendour of DC Universe’s other, frequently sublime original shows!