There’s officially no running from the romantic feelings that have blossomed between Harley and Ivy during this week’s Harley Quinn episode. Even then however, the rest of Gotham has greater concerns, as the villainous plot of Doctor Psycho reaches its endgame in, “Lovers’ Quarrel.” Interestingly, this penultimate episode for Harley Quinn’s sophomore season encompasses the bulk of climactic action for the series’ recent Darkseid/Parademon storyline as well. It emulates the structure of the first season in that it focuses primarily on action and excitement the week before the season finale, leaving the season finale to instead position itself to lean more heavily into character drama.

While this does once again put the onus on next week’s Season Two finale to deliver a story resolution that’s just as compelling as this week’s material, I can at least say that, “Lovers’ Quarrel” stands as another slam dunk for Harley Quinn, returning the series to top form, after some flagging momentum once again crept in last week. This episode is packed with thrills from start to finish, thrills that are nicely balanced by plenty of offbeat humour being shared between Harley, Psycho and the Justice League throughout this week’s events. Yes, we finally get to see the Justice League, or, at least the ‘Big Three’ leading members, come together in this penultimate Season Two episode for Harley Quinn. This highlights a strong focus on action that’s also beautifully complemented by an eccentric, hilarious team tension, as Superman, Batman and Wonder Woman become annoyed with each other’s quirks as much as they fight Parademons and repel Poison Ivy. 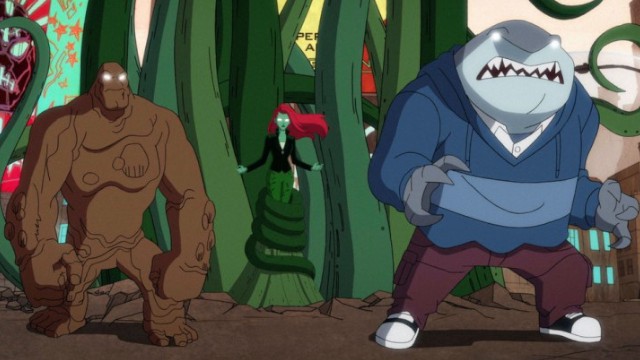 Another awesome element to this episode is that it really unleashes the destructive potential of Harley’s crew, even making a passing joke about how characters like Clayface have more or less been operating with one hand tied behind their back, before Psycho got to them! The hypnotized Ivy even spearheads a rampage across all of Gotham, battling Superman, Batman and Wonder Woman, while Harley pleads with her friend to return to sanity. The conflict of the Justice League feeling that Ivy must be permanently neutralized provides a great ticking clock as well, giving Harley a very vested stake in trying to save Ivy, beyond just doing it for the sake of sticking it to the heroes.

This more or less forces Harley to rely on Kite Man this week, who manages to help her salvage the cyberspace-fueled consciousness of Sy. Yes, despite the fact that Sy physically died during last week’s episode, it appears that Sy’s consciousness can now live on in any electrical appliance, marking a soft reboot for the character, rather than a full-on death. This presents some pretty funny possibilities for a potential third season of Harley Quinn, but regardless, Kite Man manages to rig up some mind control blockers for Harley, with Sy’s help, which allow Harley to eventually fight Ivy at the mall, for the amusement of Psycho. Further upping the stakes of this battle between best friends is that Psycho is marked for death by Darkseid if he fails to deliver Harley’s head, as promised, thus motivating Psycho, as Ivy, to kill Harley in the most brutal, sadistic way possible! 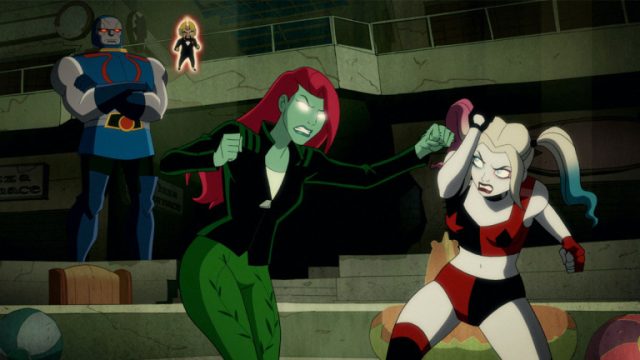 The cherry on top of a consistently exciting, funny, full-on engaging episode of Harley Quinn here is that stopping Psycho isn’t even what ends up being the big takeaway. Psycho becoming momentarily distracted by a kiss between Harley and Ivy is more than a little juvenile and contrived, but it does allow Harley to put a psychic blocker into Ivy’s ear, thus enabling the two to take Psycho out after Ivy snaps back to her senses, saving Gotham in the process. Harley is then once again offered the chance to rule the world by Darkseid at this point, though predictably, she doesn’t take it, saying that she no longer believes in being the most evil villain in the world. This indecision from Harley prompts Darkseid to leave, promising to come back and conquer Earth someday (another promising tease for a potential third season of Harley Quinn!), but Psycho nonetheless has one last trick up his sleeve; Using his powers to beam the image of Harley’s and Ivy’s affair from Themyscira to everyone in Gotham, from Batman, to Joker, to Alfred Pennyworth, to Gordon and Batgirl, and even to Bane, who, as I predicted, survived his fall into the flaming wreckage of his prison, and just appears to be sitting in the pit by himself at this point. Hey, the fact that Bane is alive by itself makes me pretty happy!

This leaves the declaration of Harley’s love for Ivy, and Harley once again wanting to put everything on the line for Ivy’s heart, apparent to Kite Man, who is now learning of Ivy’s affair with Harley for the first time. Seeing the three stand in a literal love triangle as this episode ends marks a superb ending to a superb episode too! Really, there’s pretty much nothing to complain about in, “Lovers’ Quarrel”, which delivers an excellent cocktail of action, humour and drama for Harley Quinn. The climactic battle against the possessed Ivy, and by extension, Doctor Psycho, is as exciting as it is funny, and the best part is that everyone in Gotham now knows that Harley and Ivy are in love, for better or for worse. It’s the perfect final blow from Psycho, despite the fact that he was otherwise defeated, in turn setting up Darkseid as another major threat to the Harley Quinn universe down the line. Again, the pressure is on next week’s season finale to somehow replicate this awesome level of excitement, despite Psycho being thwarted, and Gotham being saved. Harley has now gotten more clarity in her life than ever to boot, leaving Ivy to be the deciding factor as to whether Harley can finally find true love with her best friend next week, or whether Harley sacrificed everything to no avail.

Harley Quinn 2.12: "Lovers' Quarrel" Review
Harley Quinn delivers an action-packed, humourous and overall excellent conclusion to the battle against Doctor Psycho this week, while also once again forcing Harley and Ivy to confront their feelings for each other.
THE GOOD STUFF
2020-06-21
96%Overall Score
Reader Rating: (0 Votes)
0%