Agents of S.H.I.E.L.D. put its titular heroes into quite the tight spot by the end of last week’s episode, on multiple fronts! Daisy and Sousa ended up being snatched by Nathaniel Malick, right when Coulson and May end up cornered at the Lighthouse, and Mack is forced to give up the Zephyr’s position, in order to stop a decades-early Project Insight. This naturally creates a slew of obstacles in this week’s episode, “Adapt or Die”, one that continues elevating the battle against the Chronicoms, though also represents a bit of a speed bump for Agents of S.H.I.E.L.D., with the show not totally managing to close out its trip to 1976 on a fully satisfying note.

There were still a few solid plot revelations this week, thankfully, despite a less effective resolution to an otherwise promising Chronicom trap. Chief among these is Coulson and May being interrogated by Stoner, alongside another agent, only to have May detect that she can’t feel anything from Stoner’s underling. This finally gives May a purpose to wield her new empath abilities, namely detecting undercover Chronicoms, since, as of this episode, Chronicoms have learned to mimic human personalities! This is a tactic that they apparently took from observing the LMD Coulson, nicely building off of prior events from 1955, and creating a strong sense of escalation for the heroes, as their own tactics sometimes unwittingly contribute to the Chronicoms’ future invasion effort. 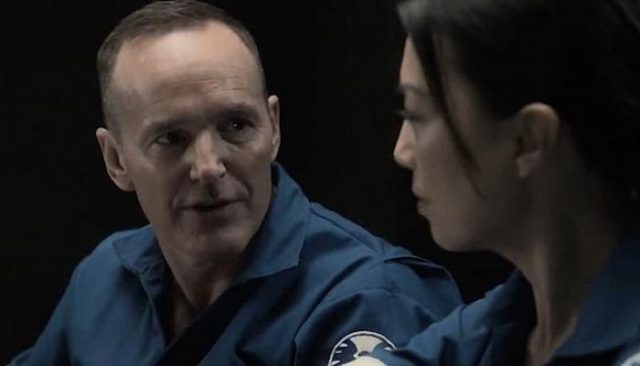 Disappointingly though, not much is currently done with the revelation that the Chronicoms can now perfectly pass for humans in conversational settings. The undercover Chronicoms at the Lighthouse are easily identified and dispatched, and after Coulson and May rescue Stoner, he immediately becomes an ally. The Lighthouse being locked down in response to the Zephyr destroying Project Insight at least prevents things from being too easy, but while Coulson and May occupy arguably the most exciting story arc of this episode, it’s disappointing that the Chronicoms weren’t able to deceive the heroes more this week. Maybe next time period, I guess.

Mack and Yo-Yo also headline a key story arc this week, specifically when they covertly infiltrate the Lighthouse, in order to rescue Mack’s parents. This is another fairly decent story arc in concept, but one that’s not all it could have been. Since this episode reveals rather early on that Chronicoms can now perfectly pass for humans, the big twist in the Mack/Yo-Yo story arc suddenly becomes very predictable. Despite Mack and Yo-Yo successfully fighting their way back to the Zephyr, they end up realizing too late that Mack’s ‘parents’ are actually undercover Chronicoms, who killed Mack’s mother and father, and stole their faces and personalities! This leads to another cool, if brief melee, while also creating some great new stakes for Mack, now that his past has been permanently altered by the mission against the Chronicoms.

Daisy’s and Sousa’s capture, meanwhile, ends up being a frustrating waste in the end. The premise behind said capture is cool at least, with Nathaniel trying to siphon blood and spinal fluid from Daisy, in order to artificially turn himself into an Inhuman. This also nicely ties into Nathaniel’s recent contact with Daniel Whitehall, who furthered these experiments in the past (future?). In the end though, Sousa finally confessing the details of his leg injury is boilerplate and uninteresting, and Nathaniel’s Inhuman experiment simply ends up seemingly burying him, due to Daisy’s unstable Inhuman genes wreaking havoc on his body. Perhaps this sets up another promising conflict for later, but for now, Daisy and Sousa didn’t accomplish much of real worth this week, and nor did Nathaniel.

Finally, another subplot takes place on the Zephyr, which only sustains a single missile attack before it cloaks again, thankfully. Still, this attack damages the Zephyr’s time circuits, forcing Simmons and Enoch to try and initiate a repair, only for Simmons to start forgetting how to repair the ship. At this point, Enoch intervenes through the implant in Simmons’ neck, which Deke mistakes for Enoch hurting his grandmother, before subsequently knocking Enoch out with a defibrillator. Ultimately though, this implant in Simmons’ neck is what allows her to maintain knowledge of the Zephyr’s time travel abilities, while also suppressing her knowledge of where Fitz is hidden. That’s kind of interesting, but did this episode really need to dedicate an entire subplot to explaining this rather simple mental implant for Simmons? It’s not like it’s that complicated to grasp!

In the end though, the eventful exit from 1976 promises better storylines to come. Coulson ends up sacrificing himself, yet again, to destroy the Chronicom Hunters’ time ship (the show makes it obvious that he’ll return in some other form), while the Zephyr jumps to 1982, only to then immediately jump again, unexpectedly stranding Mack and Deke in the past! Considering Deke’s controversial decision to shoot Freddy Malick dead a couple of episodes ago, this should create a tense, but potentially rewarding partnership between the two men, as they must no doubt work to make it back to their friends next week. For now though, “Adapt or Die” feels like a bit of a clumsy, unfulfilling end to Agents of S.H.I.E.L.D.’s 1976 arc, even if it still offers some good material. The Chronicoms’ latest upgrade provides a great new obstacle for S.H.I.E.L.D. most of all, one that should hopefully keep testing Mack’s and Deke’s resolve in the 1980’s, especially since Nathaniel’s Inhuman experiments have yet to truly make an impact on the storytelling.