Despite currently getting a breather from some of the more over-the-top ridiculous threats that have shown up during this season of Doom Patrol, the eponymous anti-heroes are still finding new kinds of trouble, or at least having it come to them. This is especially exemplified after the latest unfortunate incident with Dorothy, which resulted in the accidental death of some of Jane’s fellow personalities, Baby Doll and Flaming Katy, at the hands of the Candlemaker. “Space Patrol” thus picks up with Dorothy running away, and taking a rather unexpected trip from Doom Manor! At the same time, some mysterious visitors arrive while Chief is out to retrieve his daughter, resulting in a surprising opportunity for some self-reflection from Larry.

Despite the unknown circumstances currently surrounding Jane, who is eventually found unresponsive and covered in wax after the Candlemaker’s attack on the Underground, Chief sees getting Dorothy back as a much bigger concern, citing her potential to destroy the entire world. Cliff ends up being roped along with Chief to boot, who just so happens to have a spaceship stowed away in his garage. This is discovered after a trio of 1950’s-era cosmonauts come to Doom Manor’s doorstep, who were sent into space by Chief over sixty years ago, and have seemingly not aged a day. Larry is thus left to deal with the guests, since Rita is also off to join a Cloverton theatre group, only to learn some pretty uncomfortable facts about how the town’s citizenry perceives the previous damage caused by the Doom Patrol and Mr. Nobody. 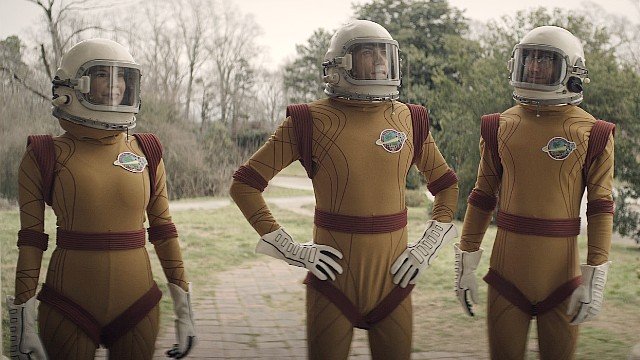 Rita’s subplot is disconnected from the larger events of this episode, but it’s nonetheless another great challenge for Rita’s ongoing grief and sense of inadequacy over her mother, and the true origin of her career as an actress. After believing she’s been chosen to play a role in famed play Our Town, Rita is instead surprised to discover that the production is actually, “Our Town!“, a Laramie Project-esque production of testimonials, media accounts and other grievances related to Cloverton being ravaged by the unstable Doom Patrol during this show’s pilot, before the first battle against Mr. Nobody led to the entire town being sucked into a hole as well. Rita even ‘befriends’ another actress that’s playing the, “Blob lady”, giving Rita an unusually funny and effective alternate perspective on her demons, and what this could mean for Rita’s character, as she continues to struggle between being a person and being a monster.

Larry, meanwhile, is left to interact with Chief’s formerly lost cosmonauts, as I said, though the two men, Zip and Specs, immediately begin acting strangely, being caught in a seemingly never-ending bout of roughhousing. The woman however, Valentina Vostok, appears perfectly normal, despite also being ageless. Avid DC Comics enthusiasts, as well as those who have consumed a large variety of DC television shows, may recognize Vostok’s name from her brief appearance on The CW’s Legends of Tomorrow (where she was instead portrayed by Stephanie Corneliussen), though that version was very different from her DC Comics inspiration. In the case of the Doom Patrol universe however, Vostok (portrayed here by Mariana Klaveno) is more in line with her comic book counterpart, where she becomes a successor of sorts to Larry, aptly called ‘Negative Woman’. Vostok already possesses her own negative spirit on Doom Patrol’s Earth-21 as well, giving her an immediate and important connection to Larry.

This meeting between Larry and Vostok definitely encompasses the highlight storyline of this episode. As it turns out, Vostok’s research into negative energy was eventually used by Chief to orchestrate Larry’s accident in the 1960’s, thus turning him into Earth-21’s Negative Man. Larry is predictably shocked and angered by this revelation, but is also surprised to learn that Vostok is at peace with her negative spirit. Not only that, but after five years, Vostok mastered her negative spirit to the point where she could prevent it from irradiating anyone around her, which explains why she doesn’t need Larry’s bandages, even if this also comes before the more tragic revelation that Zip and Specs actually died years ago, and are being primitively re-animated by alien plant spores. This examination of Vostok’s recent decades in space provides a painful return trip to Larry’s sense of failure and self-loathing, but ultimately, Vostok inspires him to try again with his family, whom Larry will now actively put his life on the line to connect with. It’s a great way to restore Larry’s resolve, while in turn continuing to build off of the difficult grief and tragedy surrounding the suicide of Larry’s son.

Finally, Dorothy running away also provided a good chance to pair up Chief and Cliff this week, particularly after Cliff has been furious with Chief for the entire season up to this point. Cliff is naturally uninterested in going to space to get Dorothy back as well, who has fled to the moon using Vostok’s spacecraft. After Chief forces Cliff onto his secondary spaceship however, powered by a magical goat head that craves apples (because why not?), Cliff is nonetheless conscripted into reclaiming Dorothy, since his robot body enables him to easily travel around the moon, without needing to breathe. This is another highlight moment for this episode, whereupon Cliff’s anger toward Dorothy for hurting Jane is left to fade, as Cliff witnesses Dorothy building a grave for Manny on the moon, in turn explaining that Manny is the last thing her mother left with her. This softens Cliff’s heart enough to forgive Dorothy and want to bring her back home, but apparently, Chief has no intention of returning to Doom Manor, resulting in Cliff being blown out the airlock, after Dorothy is brought back to the spaceship! Well, hopefully Cliff lands on Earth then, because that was a major dick move by Chief!

Despite more standout drama with the majority of the lead characters though, the plotting on Doom Patrol still feels spread a little too thin this week, with Vic and Jane most notably occupying smaller subplots, which ultimately serve as heavy exposition dumps and little else. After Jane’s fellow personalities try to drop Baby Doll’s and Flaming Katy’s bodies into the Underground’s mysterious well, for example, Jane and the rest of Kay’s personalities come to see that Miranda, the original Primary, apparently survived, and has now been reborn. This sets up Miranda to take over as Primary again, leaving Jane likely stuck in the Underground for the foreseeable future, again. Meanwhile, Vic convinces Roni to allow him to scan her damaged body, whereupon he learns that S.T.A.R. Labs apparently sold technology to Roni’s old employers, the Quorum. Silas pleads ignorance and cautions Vic about digging too far into the issue, but clearly, the Quorum are inevitably going to come into conflict with the Doom Patrol at some point, even if we may be waiting for a potential, albeit likely third season to see that conflict play out. Because there really isn’t any room on the show for the Quorum plot at this point though, Vic’s material continues to lag behind the other storylines, and that’s frustrating.

Granted, some of Doom Patrol’s forcibly truncated Season Two storytelling isn’t the show’s fault. It bears repeating that this season unfortunately lost a few planned episodes to production complications caused by the ongoing COVID-19 pandemic, so it’s likely inevitable that certain story elements surrounding characters like Vic are bound to be held back in hopes of a Season Three renewal, whether on DC Universe, HBO Max, or both. Despite some story bloat still dragging the writing down here and there however, “Space Patrol” is another strong Doom Patrol episode overall, one that forces Larry and Rita to confront another side of their accidents and trauma, while Cliff’s more compassionate side is finally able to come around to bring Dorothy back home in the end. Vic meanwhile feels like an especially big victim of Season Two’s artificially shortened episode count, but at least the background presence of the Quorum continues to tease another promising hidden threat for this show’s future, even as the Bureau of Normalcy’s strength continues to slowly build after their previous encounter with the Doom Patrol.

Doom Patrol 2.6: "Space Patrol" Review
The fallout from the Underground's Candlemaker attack leads to another great Doom Patrol episode this week, as Dorothy flees to the moon, while Larry and Rita face another side of their struggles.
THE GOOD STUFF
THE NOT-SO-GOOD STUFF
2020-07-18
87%Overall Score
Reader Rating: (0 Votes)
0%