NOTE: Full spoilers for this episode of, “Stargirl”, including a major character death, are present in this review

It’s amazing to see Henry King Jr. go from a bland jock/bully stereotype to one of the most interesting, morally ambiguous characters on Stargirl. Henry’s journey to becoming a powerful metahuman torn between two legacies has been incredibly rewarding, and that journey came to a shocking head in this week’s episode. “Brainwave Jr.” is once again at its strongest when it focuses on the King family dynamic, something that only gets better, now that Henry King Sr./Brainwave has awakened from his coma. Fortunately for his son, Brainwave has also lost his memories from the past ten years, seemingly erasing his history with the Injustice Society, and setting Brainwave on the path to potentially becoming a new, better man.

This strong premise is unfortunately let down by more rushed storytelling however, as Stargirl’s debut season continues to struggle with its constrained, streaming-friendly 13-episode count. I’m starting to wonder if Stargirl’s recently-confirmed second season will possibly add a few more episodes, especially now that the series will be moving full-time to The CW after this first season is over. For now though, the series is still rushing through too many key conflicts and story developments, taking what should be a great episode this week, and making it merely a good one. Fortunately, even with the story frustrations that linger this week, Stargirl continues to at least build effectively toward the season’s climax, as the ISA’s plot remains a short time away from execution.

One of the more mixed story turns this week, albeit one that eventually starts faring a little better later in this episode, is the recent discovery by Barbara that Courtney and Pat have a connection to the late Starman, and the former Justice Society. After Pat finally comes clean to Barbara about his mission against the ISA with Courtney as well, Barbara kicks Pat out of their house in anger, and decides to flee Blue Valley for good. This is one of several conflicts this week that feels very rushed and ineffective though. It seems hard to believe that Barbara would want to instantly uproot her new life after learning about one well-meaning deception, suddenly declaring her entire marriage to Pat to be a lie, simply because Pat lied about one activity that he was doing with her daughter. Granted, it’s a dangerous activity, but if anything, Barbara should be proud of Pat’s former history with Starman, given what we’ve seen about her character so far. Why is she furious about Pat being the former sidekick to a superhero? That just doesn’t make much sense, and seems like it happens rather arbitrarily. especially when this conflict ends up being dropped almost as quickly as it’s brought up anyway!

Mike also gets lost in the shuffle once again this week to boot. Poor Mike feels like he’s such an obvious benchwarmer character, one that will no doubt remain oblivious to his father’s renewed superhero career with Courtney for the rest of this season, at least. After Mike accompanies Pat to the garage, he once again gets angry at Courtney to boot, and tells her to have a good life, after saying to Pat that he’ll stand by him no matter what. The thing is, Mike has a ton of promise as a character, but the show just doesn’t seem to know what to do with him at this point. Barbara definitely seems like she’s going to benefit from finally learning the truth about Courtney’s and Pat’s superhero antics as well, especially when she proves surprisingly resourceful with the Mahkent’s after Pat meets her at her office, videotaping their Norwegian dialogue in order to determine that, not only is Pat telling the truth about Jordan being the head of the ISA, but that the ISA is also planning to activate some kind of machine.

This, of course, is the Brainwave-powered machine that we recently learned about, specifically the one that’s going to erase disagreeable thoughts and impulses from the brains of Americans in at least six states, to start. The second half of this episode shifts back to this ongoing battle as well, once Courtney is contacted by Henry, who pushes into her the mental knowledge of his father’s past as Brainwave. Courtney then doubles down on trying to bring Henry into the new JSA, which her allies continue to mostly reject, save for Beth, who is at least a little more understanding. Regardless, Henry does ultimately accompany the JSA into Dragon King’s tunnels, where they’re spotted after splitting up, leaving Rick and Beth to discover a confined Solomon Grundy, while Courtney, Yolanda and Henry are pointed out by an equally captive Cindy, right as Dragon King is preparing to start the ISA’s machine with Brainwave.

Frustratingly, Brainwave quickly regaining his memories is yet another conflict that ultimately goes nowhere this week, even if it does at least provide a good payoff later. There is a fairly decent climax with Dragon King and his possessed goons in the meantime as well, finally revealing Dragon King’s hideous, reptilian face, before Courtney blasts him unconscious. Yeah, I was kind of expecting Dragon King to be a bit more impressive of a foe, but oh well. In any case, after Rick is forced to temporarily abandon his endeavour of killing Solomon Grundy as revenge for his parents’ death, the JSA and Henry end up being cornered by Brainwave, at which point, Henry forces the entire JSA behind a sewer grate, declaring that he will never stand with his father. This culminates in what’s admittedly a fantastic twist as well, namely that Brainwave then uses his powers to bury his son alive, killing him before a horrified JSA! Henry’s dying words are extra poignant too, offering one last heartfelt apology to Yolanda, before urging the heroes to keep fighting. 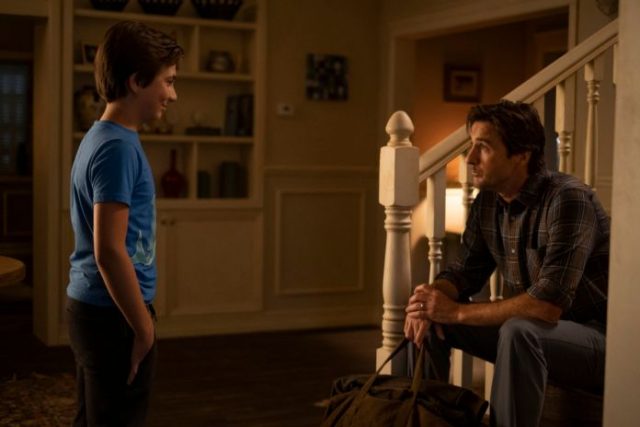 Henry’s death will no doubt hurt viewers as much as it hurts the JSA, simply because his character arc was so fantastic in the end. Still, much like Joey Zarick’s untimely demise from earlier in the season, this once again proves that Stargirl is not afraid to abruptly kill off even its teenage characters at the hands of the ISA, creating a group of villains that now feel more impressively, fanatically convicted in their cause, while also showing that real stakes are behind this battle, and starkly relatable, potentially young characters will sometimes die, cut down long before they could realize their true potential. Speaking of lost potential, “Brainwave Jr.” loses some of its own potential in the end, since it has to rush through several conflicts in order to keep the story pacing on track for this season’s final trio of upcoming episodes. Still, the unexpected, shocking death of Henry wonderfully hits home. Plus, it is nice to see Barbara becoming a surprisingly resourceful ally to Pat in the end, even after her needlessly dramatic fit that inexplicably saw her ready to instantly uproot her new life in Blue Valley. It’s especially exciting to see Barbara finally reaching out to Courtney’s biological father too, who is very much alive, proving that not only is he not Starman, but he’s likely not at all who Courtney has believed him to be after all these years!