After taking a timeout from concrete threats to its eponymous team last week, Doom Patrol brought a fresh menace to Doom Manor’s doorstep this week. “Dumb Patrol” also comes with the advantage of leaning especially hard into this show’s sublime sense of humour, when a mysterious box shows up right as Vic decides to bring Roni to Doom Manor, something that also coincides with Miranda’s first day as primary for Kay. Cliff and Rita meanwhile end up tending to their own business outside of the mansion, even if Cliff’s next task is simply hoofing his way back home, following Chief blasting him out of the airlock from space.

Yes, it turns out that Chief was indeed simply sending Cliff on the most direct route back to Doom Manor. Well, relatively anyway. This allows Cliff to occupy his own rather humourous subplot this week, even if he spends most of it angrily fuming at Chief for rocketing him back to Earth, rather inconsiderately. The most eventful point of Cliff’s storyline is when he happens to come across a stoned-out loser after his legs stop working, who forces Cliff to make over-the-top callouts over the internet, so that Cliff can use the guy’s phone to make calls for help. This is predictably fruitless, though when Cliff finally does make it back to Doom Manor, he finally meets Clara again, who received a full confession from Chief as to what he did to Cliff so many years ago. This nicely sets up Cliff to finally start building an honest relationship with his pregnant daughter, something that’s bound to take up a lot of focus next week. 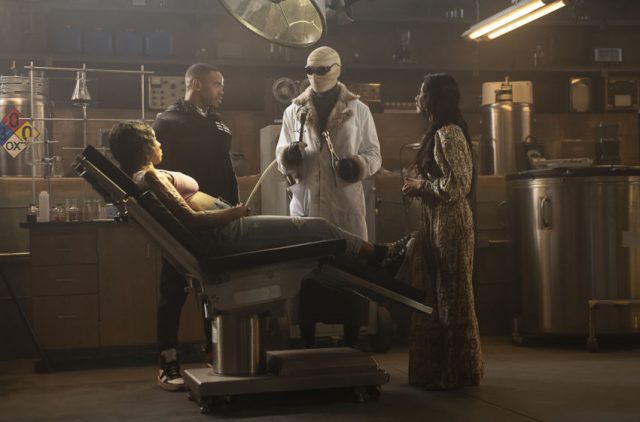 Rita, meanwhile, is continuing to try and overcome her self-doubt through her performance for Cloverton’s theatre group, even if it is a small, thankless bit part. Nonetheless, Rita takes the part super seriously, even meeting with Cloverton’s local beekeeper to try and research her one-line role. This initially seems like yet another joke plot, but it ended up paying off much better than expected. Rita gets surprising wisdom from the seemingly impatient, critical beekeeper, leading to Rita trying to confront her repressed issues with her mother, which eventually leads her to a man being mugged in an alley. At this point, Rita finally uses her powers to save someone, revealing herself as… The Beekeeper. This is not only a fairly funny troll for DC fans that are eagerly awaiting the point when Rita can embrace her DC Comics identity as Elasti-Woman, but also presents another interesting evolution for Rita’s character, as she finally follows through on her dream to be a superhero, on her own ridiculous, potentially misguided terms.

Finally, among the latest batch of crowded subplots on Doom Patrol, Chief’s the one that kind of gets the short end of the stick this week. Dorothy even sits this episode out entirely, napping on the spaceship, while Chief instead takes a trip to the Yukon, in hopes of reuniting with his lost love. Rather than make contact with Dorothy’s mother again however, Chief is instead beset by the Candlemaker, who declares that Dorothy’s mother is gone, and that he’s inextricably bonded to Dorothy. This is clearly a bridging subplot, wherein Chief finally learns the truth about how dangerous Candlemaker is, along with where exactly he came from. Outside of some predictable grief though, this subplot felt more tacked-on than the rest, meshing poorly with the mostly comedy-driven events that otherwise comprise this episode.

This still begs the question as to what the core storyline is on Doom Patrol this week though, and boy is it a doozy! This core storyline begins when the painting comprising the White Space, and containing Beard Hunter and Mr. Nobody, is sent back to Doom Manor, complete with an infestation of tiny, lice-like creatures called ‘Scants’. The idea behind the Scants is that they ‘infect’ human hosts by making them quite literally stupider, pushing bad ideas in their mind to the forefront, whereupon they’re consistently accepted as good ideas. At this point, the Scants harvest a substance from their human host brains called, “Idyat”, which, when it’s drained, eventually causes the host to, and I quote, “Shit their pants and die.” Believe it or not, these bizarre mischief makers are taken straight from the pages of DC Comics as well, where the Doom Patrol have battled them in the printed panels, with comparably ridiculous results.

Naturally, once Vic, Roni and Larry end up being infected by the Scants, what follows is a bizarre series of irresponsible events, eventually necessitating that Willougby Kipling stop by Doom Manor, to caution the team about what they’re up against. Surprisingly though, Miranda seems to be immune to the Scants’ influence, which eventually comes in handy when she has to follow the other Doom Patrol members into the White Space, where they briefly reunite with Beard Hunter, who has painted the front half of his body white in order to avoid detection by the Scants. Clearly, Beard Hunter is also infected by the Scants’ stupidity-breeding influence, but what will be more interesting to DC fans is Beard Hunter mentioning directly that Mr. Nobody, “Got a gig on some animated bullcrap, and I haven’t seen him since.” This comes complete with a cheeky advertisement for DC Universe’s Harley Quinn animated series, where Mr. Nobody actor, Alan Tudyk took up a voice acting role as Joker and Clayface. This, paired with Beard Hunter’s rather conspicuous Teen Titans GO! underwear, seems to suggest that the DC Animated Multiverse has a loose link to the live-action DC Multiverse that Doom Patrol is a part of, alongside DC Universe’s other live-action original shows, and The CW’s live-action DC shows. It’s probably a troll to some extent, but it is still cool to see some acknowledgment of the fact that Mr. Nobody can access the DC Animated Multiverse that Harley Quinn occupies, despite otherwise being confined to the White Space.

In any case, the Scant infection that’s already occurred among the Doom Patrol members eventually forces them into the company of the Scant Queen, who, after acknowledging the many bad ideas shared between the Doom Patrol members, including Vic’s and Roni’s romance, and Larry’s negative spirit wanting to stay on Earth, is surprised to find that Miranda is immune to the Scants’ influence. At this point, Miranda then ruthlessly destroys the Scants and their queen, using a combination of Silver Tongue’s and Lucy Fugue’s powers, and thus ridding the Doom Patrol of the Scants’ influence, before helpfully allowing everyone to return to Doom Manor. This entire episode in fact seems to indicate that Miranda is a level-headed, positive addition to the Doom Patrol, especially when she appears to have a much nicer disposition than that of Jane. In the Underground however, something sinister nonetheless appears to be brewing, when Jane discovers that Scarlet Harlot’s station has mysteriously been closed, and Scarlet Harlot herself is missing. Perhaps Miranda is not all that she appears to be?

Regardless, Doom Patrol has maintained a consistent high note over the past couple of weeks, and that high note was once again sustained with this week’s superb episode. “Dumb Patrol” provided another insane, yet very funny obstacle for most of the Doom Patrol to contend with, even as Cliff is forced on a long, difficult walk home from space, and Rita finds herself distracted with trying to overcome her self-doubt. The over-arching threat of the Candlemaker still needs to be adequately addressed though, and it doesn’t fit that well in a particularly comedy-oriented episode like this one. Still, I suppose we are running out of time to resolve that major storyline with Dorothy. After all, due to being artificially shortened by the ongoing COVID-19 pandemic, Doom Patrol’s sophomore season only has two episodes left before it wraps. Thus, there’s not much time left to solve the mysteries presented by both Miranda and the Candlemaker within this season. Still, it is tough to argue with Doom Patrol’s continued standout quality among comic book shows. Perhaps, even after losing some planned episodes to the pandemic, the series will have enough aces up its sleeve to carry Season Two to a satisfying finish at the beginning of August.