After its first three Season Two episodes premiered all at once at the start of this month, The Boys has now settled into its new weekly format, offering its sophomore season’s fourth episode a week after the initial three. “Nothing Like It in the World” has plenty of material to work off of too, considering how busy and exciting the kick-off to The Boys’ second season already was, even if the show does start getting a little crowded here at the season’s halfway point. Nonetheless, there’s plenty more compelling story material to keep enjoying in this episode, even if its payoffs feel a little less satisfying than their buildup often does.

One of the biggest twists from last week’s trio of season premiere episodes came via Stormfront revealing herself as an unhinged racist, one that murdered over fifty people in her mission to brutally execute Kenji Miyashiro. This leaves Kimiko desperate to take revenge on Stormfront, which is one of many small plot details that end up being squished into a rather busy fourth episode for The Boys’ second season. All that really comes of this turn with Kimiko so far is her trying to charge Stormfront at a rally, only for Frenchie to intervene, and insist that Kimiko must stand down, since she won’t survive a battle with Stormfront. From there, Stormfront just jets off. The lead characters all pursuing their own missions in this episode is well and good, but some of them were clearly lost in the shuffle of busy plotting. Kimiko and Frenchie are the two biggest examples, especially when Frenchie acting out of character with Kimiko by trying to kiss her, before shacking up with Cherie again, is all but ignored in the storytelling for now.

Likewise, the separate plots of The Seven become spread very thin here, with the narrative suddenly rushing through a ton of key developments surrounding Vought’s flagship superhero team, even if they are nonetheless good developments. Black Noir has started to hunt Butcher on his own terms, silently forcing poor analyst, Anika to help him in this endeavour, while The Deep is also about to enter an arranged marriage for the Church of the Collective. The Deep’s prospective wives are at least showcased in a creative way, with this episode sometimes cutting to testimonials from several women about what love should truly mean, but this is another thing that sometimes interrupts better storylines, seemingly at random. Oh, and A-Train gets kicked out of The Seven and replaced by Shockwave because of his poor health, before Queen Maeve is publicly outed as a lesbian by Homelander. These are huge turns, but they’re barely given any focus in the overstuffed plotting this week, often being rushed through in just one scene, and forgotten until upcoming episodes.

Fortunately, we do still get some solid anchoring storylines in this episode though, which are shared between Butcher in one main plot, Hughie, Mother’s Milk and Annie in another main plot, and Homelander and Stormfront in the remaining main plot. Butcher’s storyline feels particularly sweet, since he goes against the advice of Mother’s Milk, and sneaks into a Vought compound that Mallory tips him off to at the start of this episode, where Becca is being hidden. After finally having an emotional (and steamy!) reunion with his wife, Butcher initially convinces her to leave with Ryan, only for Becca to get cold feet in the end. Becca then forces Butcher to flee by summoning the guards, tearfully apologizing because she’s truly trapped. This is genuinely heart-wrenching in the moment, even if it does smack a bit of contrivance. I get that Vought is scary and powerful, but the storytelling just clearly doesn’t have room for a fugitive storyline with Becca and Ryan at this point, so they’re going to continue being questionably benched at the Vought compound for now. 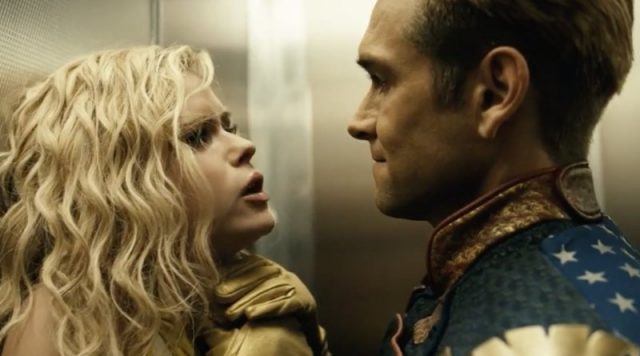 A similar annoyance ultimately creeps in during the Hughie/Annie/Mother’s Milk storyline as well, after Butcher appoints Mother’s Milk to follow a lead on a former superhero called Liberty in Raleigh, North Carolina, with Hughie and Annie eventually tagging along. Annie going on the trip with Hughie as an escape from Vought is interesting, particularly after Homelander briefly attacks her in an elevator over her connection to Hughie, only to relent when he fails to definitively prove Annie’s affections for Hughie. Over the course of the trip, Hughie and Annie even re-connect and have sex to boot, before they and Mother’s Milk arrive at the home of a woman named Valerie. Valerie confesses that she witnessed Liberty murder her brother back in 1978, but no one believed her, because she was a black girl accusing a white superhero of a capital crime. That’s bad enough, but an even bigger twist puts a key puzzle piece in place for the Boys; Valerie claims that Liberty is Stormfront! That’s very exciting, even if this excitement is dampened a bit by a very contrived breakup between Annie and Hughie soon afterward, a break-up that makes even less sense than the already questionable Becca/Butcher split from earlier.

The twist with Stormfront being Liberty meanwhile makes a lot of sense, especially when it’s easy to consider that Stormfront may not have aged due to the unique nature of her powers, and could be far older than she appears, a characteristic that’s not uncommon across many well-known superheroes and super-villains owned by Marvel and DC alike. We also know that Stormfront is an aggressively right-winged, highly racist nutjob, which is cemented in this episode, after she whips up an audience into an angry mob, complete with paying some lowlifes to rapidly churn out memes that glorify her, and disparage Homelander. This ends up creating a superb conflict between Stormfront and Homelander, and easily makes for the best story arc in this episode, especially when it forces the viewer to ask the question of whether Stormfront is actually more dangerous than Homelander! Homelander is definitely bad, but he’s also ultimately a socially stunted mama’s boy that was messed up by Vought just as much as anyone else connected to the company’s dirty dealings, and craves love and approval more than anything else. Stormfront however actively craves violence and dissent.

Don’t worry about Homelander suddenly becoming a good guy though! After Doppelganger poses as the late Madelyn Stillwell to try and keep Homelander in high spirits, before he eventually turns into Homelander himself in a sexy nightgown (something that’s as terrifying, yet also weirdly funny as it sounds!), Homelander kills Doppelganger in cold-blooded disgust, declaring that he no longer needs anyone. Like I said, as violent and awful as Homelander can be, it’s interesting to see that several of his worst moments are more akin to tantrums than genuine misanthropy. Even when he outs Queen Maeve without her permission, Homelander genuinely thinks that he’s doing the right thing, and people just aren’t falling in line with his superior wisdom. The public Queen Maeve revelation effectively pulls the rug out even from under viewers in a great way, after Homelander justifies himself to Maeve by telling her that he wants her to be happy, and stop denying who she truly is. This immense amoral complexity behind Homelander continues to shine, and continues to solidify him as one of the best antagonists on The Boys, bar none!

Clearly, a lot happens in this especially eventful episode of The Boys, which does sometimes feel a little overstuffed in its storytelling. It also sucks that the show’s relationship arcs continue to be a weak link in what’s otherwise excellent social satire, after both Hughie and Butcher alike end up being dumped by their partners for rather shaky reasons, just so we can keep the drama going. Regardless, Stormfront continues to be built up excellently as a new threat to both Homelander and the Boys, and the tease that Stormfront may have been an unhinged, murderous racist for decades is icing on the cake! Likewise, even if they feel a little too rushed here, the big shake-ups at The Seven are also intriguing, between A-Train being kicked off the team, Queen Maeve no longer having to hide her sexual orientation or relationship with Elena, and Black Noir getting closer to tracking down Butcher on his own terms. The Deep’s movement through the Church of the Collective meanwhile is being left in suspense for now, but it still presents its own exciting opportunities for the latter half of The Boys’ second season. Maybe the storytelling should slow down just a bit though, especially when we already have plenty to look forward to in the season’s remaining four episodes.

The Boys 2.4: "Nothing Like It in the World" Review
The Boys' busy storytelling gets a little overcrowded in Season Two's fourth episode, but there's still plenty of engaging twists to enjoy, as a big secret with Stormfront threatens both Homelander and the Boys.
THE GOOD STUFF
THE NOT-SO-GOOD STUFF
2020-09-16
84%Overall Score
Reader Rating: (0 Votes)
0%