NOTE: This review may contain some small spoilers for the second season of, “The Umbrella Academy.” That said, the review is written to accommodate those who have not yet watched the season, and as such, will avoid discussion of major plot developments.

The Umbrella Academy made quite a splash after debuting on Netflix last year, quickly rising to become one of the streamer’s most watched and enjoyed original shows. The superhero dramedy’s second season has ultimately gone on to even bigger success this year to boot, leading The Umbrella Academy to become the most streamed series on Netflix during much of the following weeks, even beating out evergreen third-party favourites such as The Office and Grey’s Anatomy! Sure, the new season had the advantage of a global pandemic limiting people’s ability to go outside and move about, assuming they’re not entirely in lockdown, but a win is still a win!

What’s even better is that The Umbrella Academy’s second season has smoothed out some of the noticeable flaws from its first season, most notably its wonky tone, even if Season Two does ultimately provide more of the same thing, within a new setting. The tone is nonetheless much more balanced and consistent in Season Two though, even while the series moves to a completely different era, following the latest botched time jump from Number Five. Just as the show’s first season loosely adapted the first volume of Dark Horse’s original The Umbrella Academy comic books, “The Apocalypse Suite”, Season Two loosely adapts the original comics’ second volume, “Dallas”, an alternate-history thriller about the assassination of U.S. President, John F. Kennedy. The hook behind this new storyline thus anchors the entirety of The Umbrella Academy’s sophomore season in 1963, where the eponymous characters have merely substituted one impending apocalypse for another.

On the bright side, stranding the Umbrella Academy’s dysfunctional former superheroes at various random periods of the early 1960’s provides a more rewarding excuse to separate them into their own distinct story arcs, as they each initially believe (well, save for Number Five, who lands furthest in 1963 proper), that they’ve been permanently severed from their siblings and their original time period. When Five lands in 1963 however, he bears witness to his siblings coming together in a battle against invading Soviet forces, something that was never supposed to happen in history. After this eventually culminates in global nuclear holocaust, Five is then once again forced to round up his siblings and discover what went wrong a few days earlier, with the Hargreeves’ meddling in history no doubt being the culprit behind this new 1960’s-era apocalypse.

Thankfully, every Hargreeves sibling gets an appealing story arc in Season Two, even as Klaus, Five and Vanya remain the big standouts in the ensemble. Fans might also be pleased to know that Justin H. Min has been promoted to a lead role in this new season, meaning we get a lot more of the late Ben Hargreeves, who persists as an occasionally friendly ghost, perpetually haunting Klaus as his stubborn voice of reason. Klaus, meanwhile, kicks off Season Two fleeing from a cult of his own creation, because of course he does. Outside of that, Vanya has ended up living with a nice Texas nuclear family, the Cooper family, after being accidentally hit by matriarch, Sissy Cooper’s car, seemingly resulting in her losing her memory. Five also goes on to learn that Luther has taken up an underground boxing gig under gangster, Jack Ruby, the future assassin of Lee Harvey Oswald, Diego is in a mental institution for insisting that President Kennedy is about to be murdered, and Allison has settled down and gotten married to a civil rights activist.

This new collection of storylines does a much better, more consistent job of balancing The Umbrella Academy’s simultaneous desire for heartwarming family values and eccentric comic book dorkiness. The action is still kept to a minimum outside of a few key scenes, but The Umbrella Academy nonetheless remains incredibly rich in character throughout Season Two, something that remains the biggest draw of the series. Seeing the Hargreeves siblings all struggle to recapture a sense of normalcy, with their present-era problems no longer functioning as a viable excuse, often proves to be fun and rewarding, even as character arcs like Allison’s tend to be a little more serious, and rooted in the less desirable side of living in Texas circa 1963. Vanya’s arc also veers a little more into dramatic territory, on this note, when her memory loss and forgetting of her family eventually leads to her discovering some astonishing secrets about herself, particularly her own desires as an independent woman.

Of course, a ridiculous band of vaguely ineffectual former superheroes is only as effective as the more ruthless and cunning villains that pursue them, and The Umbrella Academy’s sophomore season is certainly packing those as well. With the Hargreeves siblings continuing to meddle with the timeline simply by existing in 1963, you can imagine that The Commission remains hot on their trail, this time primarily manifesting as Swedish assassin triplets, aptly dubbed, “The Swedes.” The Swedes appear to have been made up specifically for this TV adaptation of The Umbrella Academy, and seemingly don’t exist in its source comics, but fortunately, they’re still commanded by the familiar specter of goldfish mastermind, AJ Carmichael. Hazel and Cha-Cha, who are sadly absent this season (beyond a brief guest appearance by Hazel anyway), were a little more memorable, but The Swedes still pack in plenty of moments of destructive fun, even if they seem a lot less bothered by their accommodations, and their organization’s seemingly unending budget cuts. 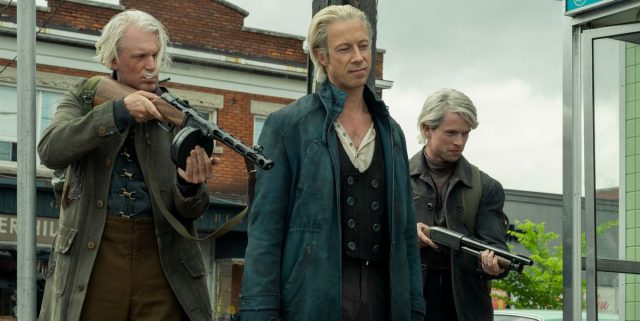 Another big surprise on the antagonists’ end early on, which leads to an awesome twist midway through the season, is the return of Kate Walsh’s mysterious Handler. Despite being shot in the head towards the end of Season One, The Handler has survived her injuries from her brawl with Hazel, and returns to The Commission, becoming freshly scorned after she’s demoted by Carmichael. This re-envisions a familiar threat to the Umbrella Academy that’s still dangerous and unpredictable, even after losing her corporate resources. Like I said, a dangerous connection to The Handler is also exposed later in the season, one that effectively upends the show’s foundation with tons of promise for a potential (and virtually guaranteed) third season of The Umbrella Academy, after the show’s lead heroes can’t possibly be interpreted the same way again.

Another of the biggest draws within The Umbrella Academy’s second season is, once again, its eclectic soundtrack of pop/rock classics. Season Two’s soundtrack also predictably skews a little more old-fashioned than Season One’s, reflecting the time period in which it’s set, even if it does also contain a few newer tunes here and there. As expected though, Season Two’s soundtrack remains sublimely put together, with highlights including Boney M.’s, “Sunny”, Frank Sinatra’s, “My Way” and KISS’s, “I Was Made For Loving You” on the classic end, along with some effectively tongue-in-cheek covers for more modern songs such as Adele’s, “Hello” and Billie Eilish’s, “Bad Guy.” This creates another memorable, varied mix of licensed music that’s just as weird and mismatched as the titular Hargreeves siblings, who naturally pick up right where they left off with their family dysfunction, after their inevitable reunion, and their latest mission to save the world from the destruction they themselves will bring upon it. 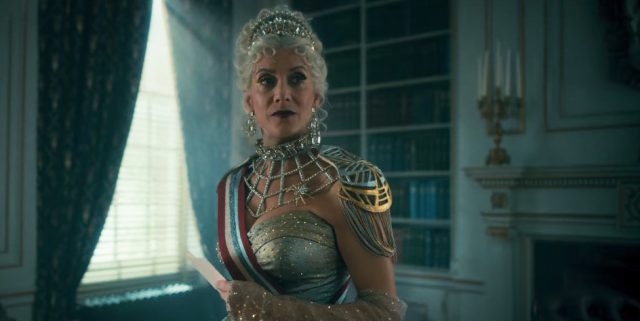 The Umbrella Academy’s second season, entertaining as it is, sometimes represents a remix of the same conceit to a fault. It definitely recycles some well-worn drama, along with the same apocalypse obstacle for its lead anti-heroes. It’s admittedly easy to get the feeling that the series would better thrive with a more sweeping reinvention of the problems facing the Hargreeves family as a whole. Still, Netflix’s quirky superhero dramedy series smooths out many of its earlier issues to become clearer, more consistent and even more enjoyable in Season Two. The season-long change in time period is utilized very well, the new character arcs for the Hargreeves siblings are nicely varied, but still fit together well in the end, and of course, the new soundtrack, comprised of more licensed rock and pop favourites, remains exceptional! The fact that the show is essentially selling you several of the same issues and draws again means it’s doubling down on its existing fanbase rather than reaching out to prospective new viewers, but perhaps a potential third season can truly take The Umbrella Academy to a new level of excellence. Third time’s the charm for finally keeping the world apocalypse-free?

The Umbrella Academy: Season Two Review
The Umbrella Academy's second season doubles down on the same conflicts and draws as the first, with a more refined and consistent result, thanks to a fresh period setting.
THE GOOD STUFF
THE NOT-SO-GOOD STUFF
2020-09-17
86%Overall Score
Reader Rating: (0 Votes)
0%