There has been no shortage of desire from the gaming community for Nintendo to release the all-time classics that are Super Mario 64, Super Mario Sunshine, and Super Mario Galaxy, in a collection for the Switch. Heck, we’ve wanted remakes and re-releases since the Wii era, and it’s been almost 15 years since that console launched.

In any event, Nintendo finally made a lot of people happy with the announcement of the Super Mario 3D All-Stars collection on Switch in September, with a subsequent release only a few weeks later. And while the Japanese developer did make a few quality of life (QOL) changes to the games, were they enough to really give this collection the good ol’ Nintendo Seal of Quality?

Unfortunately, the answer is a resounding ‘no.’

Look, we’re not going to review the games here, because there is nothing that will convince us that these titles are not among the best games ever made. Mario‘s first foray into a fully-realized three-dimensional world was and is still a masterpiece. Super Mario Sunshine, while much derided at the time, is well deserving of its cult classic status as a still-unique take on the franchise. And, of course, one can argue that Super Mario Galaxy set the standard for future Mario titles, including what may well be the best-ever game in the franchise, Super Mario Odyssey.

But let’s talk about the collection. As collections go, this package is just missing what Nintendo is so often known for when it re-releases content.

Nintendo even released a collection on the Wii ten years ago called the Super Mario All-Stars Limited Edition, which included the same content as the original SNES game, but with a physical art book and audio CD of songs from the games.

Now this was a great collection of games. And that art book!

The way this collection is set up is quite different than Nintendo’s first two examples of Mario collections. Loading up the game, whether from a cartridge or digitally, you’re presented with six options: the three games mentioned, or an audio album with songs and themes from each game. The audio is a nice touch and adds a bit of value here, but is, of course, not the main draw of the set.

Each game has had some basic changes made to it, which does improve QOL as mentioned. However, there is just not enough work put in here to justify the set at a full $60 price.

Super Mario 64 has had a minor facelift, with a 720p resolution (though it is still in a 4:3 aspect ratio) and a seemingly enhanced draw distance, but has, for some reason, had its camera controls inverted. Previous bugs like being able to build up incredible speed with a backwards jump have been essential to the speed running community, but have been completely removed in this version. While they were never intended to be there in the first place, they’re now a part of the game’s heritage, and removing them kind of destroys the experience.

For some reason, with dual analog sticks on the Switch, Nintendo decided against updating the camera controls and the N64’s C buttons have essentially been remapped to the right analog stick. The result, especially if you’ve come from playing Odyssey or any other modern game, is a messy experience.

It’s not all bad, though. Menus, dialogues, and text look sharper than ever on the TV, and even better on the Switch’s built-in screen. And because of the 720p resolution, Mario himself looks sharper than ever. No more haze or blurriness throughout the experience. Models are sharp enough here to cut you.

Chain Chomp’s teeth and the game’s graphics: sharper than ever!

Super Mario Sunshine got perhaps the biggest visual facelift as it has been the only game that has been stuck on its original console for so long without a re-release. In addition to moving from a 4:3 aspect ratio to a full widescreen format, Sunshine runs at 1080p when docked to a TV, and is perhaps even more beautiful in 720p on the smaller built-in screen where we found it has a slightly smoother framerate. Unfortunately, similar to Super Mario 64, camera controls have been flipped around, and without any way to change them back, we’re just not sure why.

Where Sunshine got the biggest visual upgrade, Super Mario Galaxy saw the biggest functional improvements. Joy Con motion support was added so that players can get as close to the original game’s experience as possible (provided you’re not playing on a Switch Lite), and includes two-player support so a friend can tag along. This game also runs in full 1080p when docked, so the visual fidelity is pretty incredible considering the original game was released in 2007.

So this brings us to the question as to whether or not this game really includes every game that is a 3D Mario title. We’re wondering why Super Mario Galaxy 2 and Super Mario 3D World or Super Mario 3D Land weren’t included in the collection. The latter two games even have 3D in their titles! 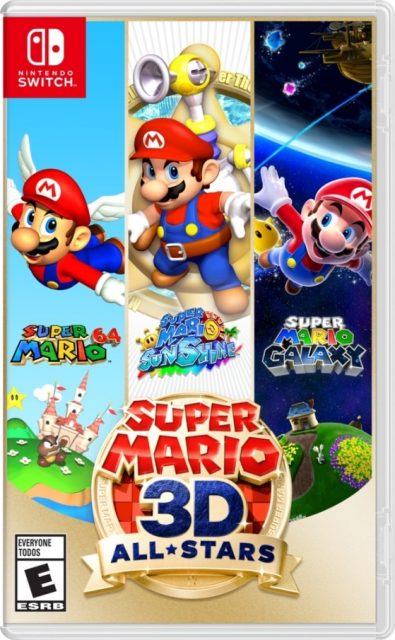 We’re glad Nintendo released this collection, and while we wish there was more content, we’re still glad it exists, especially because it means Super Mario Sunshine is available to many more people (the other two games have been available via the Virtual Console on previous systems).

What would’ve pushed this set of games over the top would have been a much more imaginative and earnest push towards a rebuilding of the games. A full remake of each title wouldn’t be necessary (especially if 3D World and 3D Land were included; those games could have just been 1-for-1 ports since they’re relatively new), but each game deserved the 1080p experience, as well as improved camera controls, and leaving in some broken bits that made the games what they were (we’re looking at you, speedy backflipping Mario in 64).

Without these improvements, and without any real reason to get the physical game here, there’s just so much more that Nintendo could have done with the collection to make it worth the full price tag, and more importantly, worthy of the Super Mario All-Stars moniker. Unfortunately, we’re more left to imagine what could have been.

Super Mario 3D All-Stars Review
While the soundtracks are a nice touch, and there are some basic visual (and even functional) enhancements to each game in the collection, we can't help but wonder how much stronger Super Mario 3D All-Stars would have been as a package with a bit more of the usual Nintendo heart and soul usually found in their games.
Audio80%
Visuals60%
Gameplay50%
The Good Stuff
The Not-So-Good Stuff
2020-10-06
65%Overall Score
Reader Rating: (0 Votes)
0%