The Walking Dead: World Beyond didn’t really get off to the best start during its first episode last week, but at least it managed to end with its adolescent protagonists finally hitting the road, and making their way outside of the safe community that they’ve lived in their whole lives. “The Blaze of Gory” sees the teens embarking upon their first real adventure outside of the now-destroyed Campus Community walls, which presents an interesting new perspective to a ragtag band of folks trying to make it in the devastating world of the walker apocalypse. At the same time, Felix and Huck continue to chase down their teenage charges, which eventually results in a heart-wrenching trip down memory lane for Felix.

“The Blaze of Gory” at least nudged The Walking Dead: World Beyond forward a little bit, but it’s also true that the series is still too dull throughout its second episode. The subplot with Felix ended up completely stealing this week’s offering in fact, despite a semi-interesting idea being explored with the teens, as they encounter their first walkers. Despite the storytelling cutting between the teens’ lessons under Felix back at the Campus Colony, which taught them how to fight and protect themselves from walkers, the teens have no actual experience battling the undead, and that did come into a reasonably good degree of focus. True to form, none of the young protagonists are capable of killing even helpless, stationary walkers, which begins to have the stakes of their quest dawn on them, to a pretty clever degree.

As with the series premiere last week however, interesting doesn’t necessarily equate to engaging. The Walking Dead: World Beyond is still paced like molasses. Most of this episode simply has the teens bumble around, talk about nothing that truly matters, and decide that they want to make a tourist-style stop at the, “Blaze of Gory”, a mysterious burning mass that’s said to draw walkers. This admittedly creates a half-decent excuse to make a mostly walker-free ‘starting area’ of sorts for the teens, as if their journey is taking place in a video game and not a television show. Even if some aimlessness feels natural with this show’s premise though, it doesn’t do any favours for storytelling that’s operating within a limited series, specifically storytelling that’s content to waste a bunch of time, and not currently feel like it’s headed anywhere important, despite having a strictly limited amount of time to find its footing.

At least we do get to see some further development for the teens’ relationships however, along with an interesting swapping of roles between the Bennett sisters. Now that the adolescent leads are outside of the Campus Colony’s walls, Iris is the one attempting to step up and become the tough, reliable leader of her group, while Hope becomes less sure of herself, and even decides to leave a trail for Felix and Huck. This is another interesting idea, but nothing useful is really done with it at this point. Sure, it’s nice that these adolescents aren’t spending their entire quest bitching and squabbling so far, as TV teens are often wont to do, but now it feels like The Walking Dead: World Beyond is actually creating the opposite problem, namely making the teens get along too well, and never truly disagree nor challenge each other’s decisions, even when they probably should. 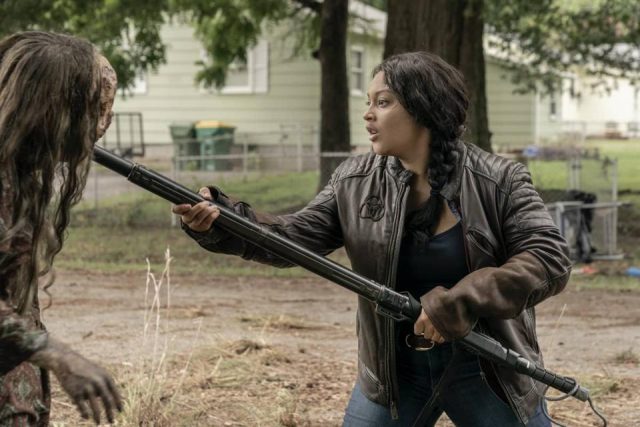 Like I said, for now, I’m actually more interested in following Felix and Huck than I am the teens, even if I admittedly don’t dislike the teens at this early stage. They’re just dull, unimpressive protagonists so far, and slogging through their first greenhorn steps in the wild is definitely going to demand some patience from viewers. Regardless, Felix and Huck provide a decent occasional reprieve from the teens lucking out and dodging death, despite Elton in particular flirting with the idea that the teens are the, “Final generation” of this universe (Ha! Not if AMC has anything to say about it, Elton!), and I must say that I do love Felix’s and Huck’s cheeky rapport with one another. Felix and Huck don’t actually encounter any resistance at all during their own quest this week, though even just listening to them talk feels decently rewarding, especially when Huck learns something crucial about Felix’s backstory here.

You see, at one point, Felix and Huck wander near the old neighbourhood of Felix’s parents, who, apparently, threw Felix out of their house when they learned he’s a homosexual. We also get some pretty solid flashbacks showing Felix trying and failing to rescue his parents once the walker apocalypse begins, only to continue being rejected by his mother and father. After recounting this story to Huck, Felix then sneaks over to his parents’ old house late at night, and sure enough, witnesses that his parents have died and re-animated. Felix thus puts them out of their misery, and subsequently rejoins Huck for their mission, barely acknowledging that anything happened. This is a smart, heartfelt way to flesh out Felix as a character, without really becoming obnoxious about it. Felix is quickly becoming one of my favourite characters on this show, in fact, since the writing definitely seems to be smartest and most engaging with his character, at least so far.