After kicking off its sophomore season on a fun, if fairly familiar note last week, The Mandalorian moved to more uncharted territory this week, providing some unexpected new obstacles for Din Djarin and The Child. “Chapter 10: The Passenger” sees the duo acquiescing to yet another favour for someone, this time manifesting as an escort mission. Turns out that Djarin doesn’t like escort missions any more than most video game enthusiasts do either. Still, this is the only way to stay on the path of surviving Mandalorians, after Djarin’s former trail went cold at Mos Pelgo, and once again, the favour turns out to be anything but simple.

The Mandalorian still doesn’t completely break away from its formula in this week’s episode, but at least it does a better job of hiding its familiar tropes this week. Better still is that Ant-Man movie director, Peyton Reed helms this episode, which definitely becomes apparent towards its climax. Even before that though, Reed manages to oversee a pretty enjoyable adventure for Djarin and The Child, even if Jon Favreau’s latest script still lets it down in a couple of places. One can’t argue with how exciting this episode is though, reliably throwing more dangerous obstacles in Djarin’s path, beginning with a pretty great cold open, wherein Djarin has to fend off bandits on Tattooine, after they attempt to steal The Child.

Beyond that however, most of this episode thankfully moves off of Tattooine, providing another welcome change of scenery for this show. Amy Sedaris’ Peli Motto once again returns to point Djarin to his next destination, at the cost of a Frog Lady (yes, that’s literally what the series calls her) coming along, so she can be dropped off at a moon called Trask, in exchange for the information on other Mandalorians. This seems simple enough, but there’s a big wrinkle; The Frog Lady’s eggs are delicate, and won’t survive light-speed travel, thus necessitating that the Razor Crest moves through space at, “Sub-light” velocity. Djarin is initially against this, especially when it’s hard to imagine any Star Wars vessel traveling sub-light during the era of the New Republic in particular, but there’s no getting around this obstacle. He ultimately has no choice but to agree to the Frog Lady’s terms.

This creates a bit of an interesting challenge, but I have to ask; Has light-speed travel ever truly been hazardous to any species in the Star Wars universe? It’s never made clear exactly why light-speed travel is so taboo for the Frog eggs here. That in turn sometimes feels like an excuse to force an obstacle that logically shouldn’t be there. On the bright side however, Djarin having to travel sub-light puts him on the radar of two New Republic X-Wings, giving us a bit of a peek into how Djarin and the Razor Crest are perceived by the New Republic, who naturally flag Djarin for his suspicious space vessel. It’s great to see The Mandalorian providing more hints as to how the otherwise optimistic future of the New Republic is making things difficult for certain less savoury occupations like Djarin’s, imposing tiresome new rules and bureaucratic measures that only serve to create disaster for Djarin on what’s otherwise a semi-routine job.

That disaster takes hold when Djarin is forced to flee from the X-Wings, eventually crashing on a nearby ice planet. No, I don’t think it’s supposed to be Hoth, but who knows. This show has had Tattooine imitations before, so why not Hoth imitations? Anyway, after the hull is compromised, and the Frog Lady rigs up the remains of fallen heist droid, Q9-0 (complete with Richard Ayoade once again voicing him!) to urge Djarin on through their language barrier, Djarin gets to work fixing the Razor Crest as best he can, only for the Frog Lady to disappear. This sets up a payoff of sorts to The Child sneakily eating several of the Frog Lady’s eggs, eventually leading to him disturbing an alien ice spider nest while Djarin is tracking down the Frog Lady at a hot spring. From here, we get a pretty awesome climax for this episode, when a whole horde of ice spiders begin to chase Djarin, The Child and the Frog Lady, who all have to hightail it back to the broken, non-functional Razor Crest!

This is a fantastically harrowing and intense situation, especially when it allows director, Peyton Reed to once again play with some creepy, yet impressive scale mechanics throughout the visuals. That said however, this climactic obstacle is almost too good in the end. It quickly forces Djarin and co. into a corner, only for them to be bailed out at the last second by the two X-Wing pilots from before. The two pilots then declare that they ran Djarin’s credentials (how? Wasn’t he supposed to go to a New Republic station for that?), and saw that an arrest warrant is out for him, but he also delivered three high-profile bounty targets, so they’ll let Djarin go, if he fixes his transponder. 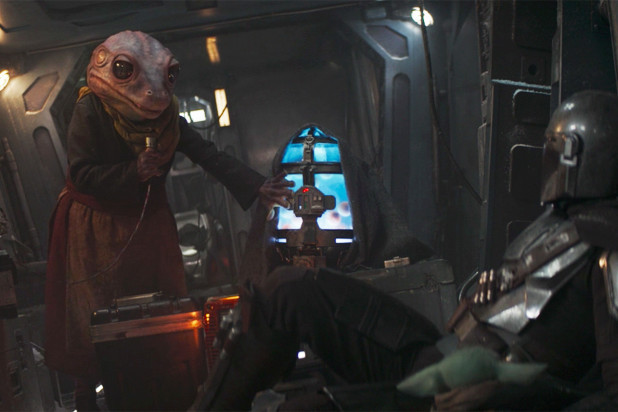 Okay, as much as this is another cool payoff to the end of last season’s, “Chapter 6: The Prisoner”, wherein Djarin ended up delivering his treacherous heist crew to the New Republic’s custody, it’s undermined significantly by the fact that the X-Wings suddenly abandon their protocol, yet also refuse to help Djarin fix the Razor Crest… Only for Djarin to fix it anyway, as long as no one leaves the cockpit? Well then why didn’t he just do that before?! You could have avoided the whole ice spider scenario that way! Sure, Djarin couldn’t have possibly accounted for the Frog Lady taking off, but after she rigged up Q9-0 to translate her Frog speech for Djarin, Djarin could have easily told her this simple repair plan! Thus, the ending of this episode feels pretty contrived and head-scratching, forcing some otherwise cool obstacles, rather than effectively allowing them to unfold naturally.

Even if this episode’s conclusion leaves much to be desired though, at least The Mandalorian feels a little more surprising and off-book this week, despite the show continuing to hold its most tantalizing Season Two story teases close to the chest for now. “Chapter 10: The Passenger” manages to deliver a pretty thrilling, if spectacularly unlucky escort mission for Djarin. The action and scope behind this episode remain highly impressive, and even if the writing isn’t quite airtight, the thrilling direction helps to compensate. It was also nice to get another connection to the ongoing development of the New Republic in this episode, and how it continues to make life difficult for Djarin and his ilk. On that note, there were no more Boba Fett teases this week, sadly, but perhaps the prying eyes of the New Republic are among the reasons why Boba appears to be living off the grid on Tattooine, waiting for his grand re-entrance into the new Disney era of the Star Wars universe.

The Mandalorian 2.2: "Chapter 10: The Passenger" Review
The Mandalorian delivers an exciting, highly unfortunate escort mission for Djarin and The Child this week, bringing the series to less trodden territory.
THE GOOD STUFF
THE NOT-SO-GOOD STUFF
2020-11-06
83%Overall Score
Reader Rating: (0 Votes)
0%