NOTE: This review may contain some small spoilers for the first season of, “Ratched.” That said, the review is written to accommodate those who have not yet watched the series, and as such, will avoid discussion of major story developments

Among the many media casualties of 2020 is a lack of a new season for FX’s fan-favourite anthology series, American Horror Story. Sure, American Horror Story is no doubt poised to return in 2021, especially after FX previously renewed it for multiple seasons, but it’s nonetheless apparent that the series’ creator and lead producer, Ryan Murphy needs something else to scratch that spooky itch in the meantime. I assume this is at least one reason why Ratched exists. It’s a series that’s absolutely covered in Murphy’s creative fingerprints, despite the series’ original pitch not coming from him.

Ratched is currently the most ambitious project to come out of Murphy’s $300 million production deal with Netflix, which previously brought the rather shaky Hollywood to the powerhouse streaming platform this past May. Originating as a pitch from Evan Romansky, who also wrote the pilot episode, Murphy has since taken over Ratched entirely, securing all necessary rights to the Nurse Ratched character, as well as the streaming rights to where she originated, namely the 1962 novel and its subsequent 1975 movie adaptation, One Flew Over the Cuckoo’s Nest. As its title suggests, Ratched also has no connection to One Flew Over the Cuckoo’s Nest protagonist, Randle Patrick McMurphy, and is instead an origin story about the novel’s and movie’s main antagonist, Nurse Mildred Ratched, over a decade before she would take up a station at an Oregon mental hospital, and have her fateful encounter with McMurphy.

This sounds like a very cool idea. Nurse Ratched is one of the most impressively subversive and chilling villains in classic literature and film alike, and her character is complex and unpredictable enough to effortlessly lend herself to a Netflix series centering entirely around her. Murphy re-teaming with one of his most frequent and favourite actresses, Sarah Paulson for the eponymous role is also a stroke of genius. Paulson has already proven that she can balance an unassuming, heartfelt charm layered beneath a surprising sense of seething, unhinged menace, and that kind of combination sounds perfect for a character like Nurse Ratched. With Murphy also bringing fellow American Horror Story alum, Finn Wittrock into the lead ensemble as Ratched’s estranged (and deranged!) brother, Edmund, you really do have a recipe for greatness here!

So what went wrong, exactly? Sure, Ratched is wonderfully produced, absolutely leaping off the screen with the same bold, vaguely garish palette of colours and bright lights that Murphy is often associated with in projects like Pose, and indeed many seasons of American Horror Story. Ratched feels particularly gorgeous if you have the option of enjoying it on a 4K/HDR display as well, making it even brighter and more immersive! For all its style and kooky flair however, something about Ratched just feels hollow and soulless. That’s also before considering that Murphy’s aggressive style pretty proudly untethers the series from recognizable reality right from the jump, which will immediately confuse and alienate many fans of One Flew Over the Cuckoo’s Nest.

To be clear though, the problem definitely isn’t Paulson. In fact, many of the actors in Ratched deliver very impressive performances, managing to keep a grounded sense of recognizable humanity within a series that otherwise feels like a 1940’s-era fever dream. Paulson, naturally, is the biggest standout though, managing the impossible task of rivaling Louise Fletcher as a ruthless, but surprisingly sympathetic Mildred Ratched. It’s also not Paulson’s fault that she needs to play this timeless character in such a strange, exaggerated setting, perhaps making her performance even more impressive, since it puts her at an inherent disadvantage in contrast to Fletcher. Even Paulson’s convicted lead performance can’t always elevate a confused tone and a lot of head-scratching plotting though. 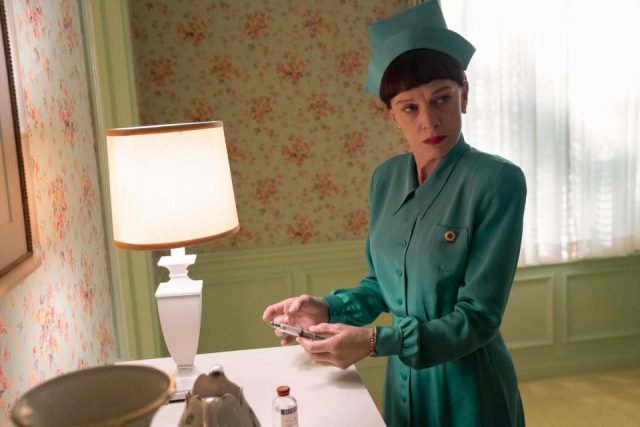 These sharp performances are often undermined however by episode plots that range from being unforgivably dull to frustratingly asinine, and sometimes even both (somehow). At least Ratched’s first season only spans eight hour-long episodes, so it has the sense to avoid stretching itself out more than it had to, but even then, Ratched feels thematically and dramatically all over the place. It presents relatable, if also-ran social commentary one minute, before descending into the kind of nightmare fuel-inducing lunacy that more or less transforms it into Diet American Horror Story.

This all stinks of Murphy falling back on his recognizable tropes far too much, re-painting Mildred Ratched as a morally confused, vaguely traumatized, blatantly closeted lesbian, one that evolves into what she is in One Flew Over the Cuckoo’s Nest through good intentions that are nonetheless consumed by amoral determination. All of that works on paper, in fairness, and when Paulson is really on her A-game, she can effortlessly seize this show and run with it! Still, all of these good, engaging new ideas for Nurse Ratched’s character would have flourished more consistently and frequently if they were in a better, more focused show.

Don’t get me wrong, it’s not like Ratched is dead-on-arrival. There are good ideas here, and Murphy perhaps conceding some creative control could lead to a tighter, more satisfying second season, one that Ratched was confirmed for by Netflix before this first season even premiered. For now though, Ratched is undeniably disappointing in Season One, squandering a ton of good performances and potential with a mish-mash of Ryan Murphy tropes that remove Mildred Ratched’s character astonishingly far from her source material. There are bright spots to carry you through the frustration, usually in how the actors manage to at least slightly elevate so much limp, melodramatic screenwriting, but Ratched nonetheless needs some big narrative tweaks if it wants to deliver a more worthwhile second season.

Nurse Ratched deserves far better than being stuck in a bad season of American Horror Story!

Ratched: Season One Review
The first season of Netlfix's Ratched is impressively produced and wonderfully performed, but its frequently confused, ludicrous storytelling too often turns it into a head-scratching bore.
THE GOOD STUFF
THE NOT-SO-GOOD STUFF
2020-11-04
67%Overall Score
Reader Rating: (0 Votes)
0%