Well, we’ve made it to the halfway point of The Walking Dead: World Beyond’s first season. Even now though, AMC’s latest post-apocalyptic spin-off series has little to show for it. The show continues to bleed momentum with each passing week, and sadly, that downward trend continues yet again with this week’s episode, “Madman Across the Water.” Somehow, this episode moves even slower than the one from last week, as the group lingers at the shore, struggling to build a boat that will take them down the Mississippi River. Naturally, forces around them create obstacles beyond a lack of supplies in the process, and that really should be more interesting than it ultimately is here.

I will say, on the positive side, that some of the teens’ ingenuity with their limited resources can be kind of clever. Even Silas, a blue collar worker at Campus Colony, has insight into how to build and repair machines, with the Bennett sisters and Elton nicely filling in the gaps with their respective scientific knowledge. It’s enough to impress even Felix and Huck, for good reason. The teens legitimately seem to be doing fine without the adults constantly intervening, something that eventually turns Huck at least over to their cause. Felix however remains unconvinced that proceeding forward is a good idea, and even tries to put the screws on Elton, so he’ll pressure the rest of the teens to return to Campus Colony. 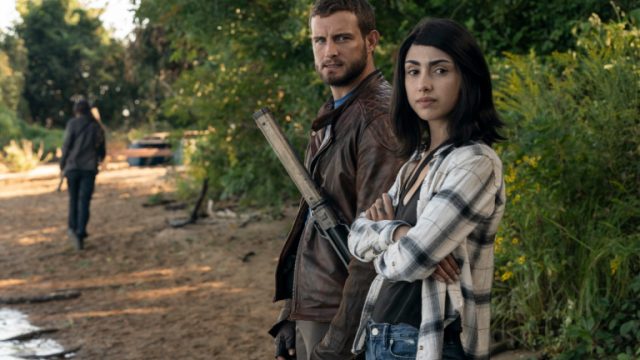 As I said last week though, this entire conflict is completely, utterly pointless! We already know that Campus Colony has been destroyed, and that the teens obviously can’t go back there. Elton doesn’t even seem all in favour of Felix’s shady return plan to boot, simply finding himself unable to properly speak up when Felix tries to force his hand. Naturally, this means that Elton and his backstory take up a lot of focus in this episode, and this in turn goes on to highlight that Elton is the weak link in the teens’ ensemble at this point. Whereas the Bennett sisters and Silas have rich, interesting and complex backstories, Elton simply ends up being a cliched, cowardly egghead. He’s just not as effective at standing out, especially when Iris and Hope already have their own scientific know-how to fall back on.

Of course, if anyone among the teens is likely to eventually become an antagonist on this show, or some other Walking Dead show, it’s probably Elton. Elton’s cowardice and cold, rational thinking seems to lend itself quickly to the idea of Elton eventually ‘breaking bad’, and likely falling in with the CRM, along with their radical ideas for the future. This is speculation on my part, but regardless, this episode does finally lead to Hope realizing, thanks to a handy photo in Elton’s book, that the pregnant woman she shot so many years ago was Elton’s mother, another dark secret constantly threatening to push Elton over the edge. Again though, we already know this! Elton doesn’t know this, granted, but this show already spoiled that fact for viewers several weeks ago, and yet it’s nonetheless acting like it’s some big twist. This is one of the biggest reasons why The Walking Dead: World Beyond is so slow and doggedly paced, namely because it can’t stop telegraphing the dramatic turns with its characters well in advance!

Even a blow-up between Hope and Felix, after Hope conveniently overhears Felix conspiring with Elton (seriously, could they not step a little further away?), ends up not amounting to anything in the end. Instead, Felix simply confesses to Hope and Iris that he’s more or less in self-imposed denial because he’s so worried about Leo and Will, and this in turn further negates the non-conflict of trying to force the teens to turn back. The peacemaking scene between Hope and Felix is kind of nice, but it would have been better if their spat actually felt like it mattered. Instead, it merely leads into Hope and Iris teaming up with Felix to repel some approaching walkers that are stuck behind fishing line, walkers that Felix should probably be able to handle by himself.

On this note, The Walking Dead: World Beyond’s obstacles continue to be ridiculous and unbelievable this week. Apparently, a freak thunderstorm hits while the teens are trying to build their improvised boat, only for it to disappear after some lightning conveniently causes some walkers to spill out of a bar. This theoretically creates multiple ticking clocks to get the boat finished, and decide on a heading. Once again though, none of these conflicts ever truly feel pressing or dangerous. Instead, they just feel contrived and sloppy, with everyone ultimately making it onto the Mississippi River without issue, because what else could have possibly happened to keep the storytelling going? It’s infuriating how predictable and limp The Walking Dead: World Beyond is! Hopefully the mysterious survivor that encounters the group in this episode’s final seconds can mix up the storytelling though, since the current ensemble really isn’t cutting it. 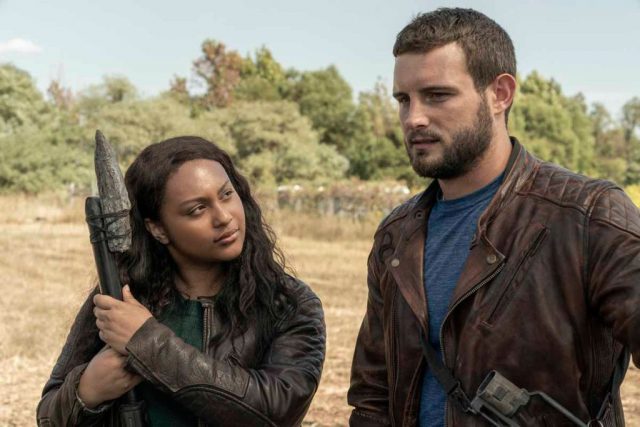 “Madman Across the Water” is just the latest tedious offering for The Walking Dead: World Beyond. The show doesn’t manage to provide interesting development or backstory to Elton at this point either, despite finally flirting with Hope eventually having to confess that she killed Elton’s pregnant mother as a child. With so much of this week’s storytelling revolving around an inevitably failed effort to get the teens to return home as well, this latest episode once again wastes far too much time, and can’t seem to move the plot forward at a satisfying clip. I’m not sure how I’m supposed to care about anything that’s happening on The Walking Dead: World Beyond at this point, and that continues to leave the show failing to launch. At least another person finally came along though, so maybe we can face a more human threat for once, or instead squander it with more pointless arguing and narrative holding patterns. Seems like that’s more The Walking Dead: World Beyond’s speed.