It’s back to Lawton for this week’s episode of Fear the Walking Dead, albeit this time from another new character perspective. John Dorie’s taking center stage for the show’s latest offering, after predictably being made one of Virginia’s faithful rangers. “The Key” thus chronicles a particularly crucial case for John, after he appears to genuinely drink Virginia’s metaphorical kool-aid, going on to believe that Lawton could genuinely be a place that he and his loved ones could call home. Naturally though, things aren’t that simple, as the death of a fellow ranger not only disillusions John from his former optimism, but continues to add more shady designs to the untrustworthy vision behind Virginia’s Pioneers overall.

John Dorie has always been one of the best characters within the revised premise of Fear the Walking Dead, and his character hasn’t lost a step at all since being forced to shack up in Lawton. In fact, “The Key” represents a superb high point for Season Six so far, functioning well as a character piece for John, a legitimately interesting murder mystery, and another batch of great teases for the threats that continue to stir beyond Lawton’s walls. Even a seemingly happy ending doesn’t do much to quell John’s unrest, nor his lingering sense of duty and justice. After all, the more glimpses we get of how Virginia runs things, the more we come to see that there’s something very wrong with Lawton, if not everybody in it. 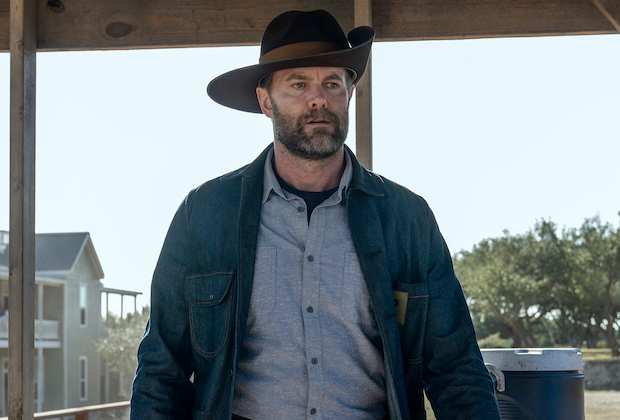 These moral challenges prove to be particularly heartbreaking for John as well, whose hopeful letters to June are practically undone in real time throughout this episode. Immediately after declaring that Lawton has not seen a single dead citizen in nearly a year, John goes out to find another ranger murdered, tangled up in a fence, and chewed on by walkers. Virginia very quickly rules the scene an unfortunate accident, especially since the ranger in question is a known drunk, but John’s intuition tells him differently. While snooping around the scene, John even finds an earring that seemingly reveals someone else was present during the time of death. After John brings the earring to Virginia however, Janis ends up inadvertently implicated in the crime, with the other earring conveniently being found among her things, despite the fact that the earrings don’t belong to her.

Naturally, something really doesn’t smell right here. John of course continues to investigate further, despite Virginia’s wishes to leave the case alone, particularly after Dakota hints to John that Virginia is covering for someone. Sure enough, John discovers decisive evidence that proves the ranger was murdered as well, specifically a slashed throat on the body, after he decides to dig up the ranger’s corpse himself, under cover of night. This should be a big smoking gun, but walkers conveniently tumble into the open grave, and chew away the evidence. Admittedly, this is the one element of this week’s storyline that was pretty dumb and contrived, even by this show’s standards. Walkers conventionally don’t feed on anyone that’s not freshly dead, and I’d certainly think that someone who’s been dead for days, and has begun decomposing, would not be appetizing to walkers anymore. This just stank of a lame excuse to keep John’s investigation from being concluded when it logically should have been. 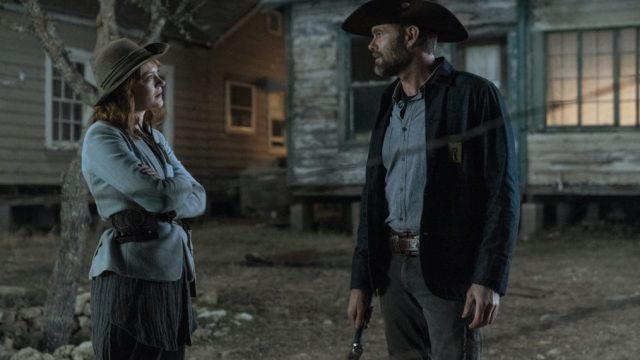 Despite that contrived dead end however, this episode continues to build momentum from here, even after John has now determined foul play, but can’t tell anyone. There’s a really standout twist to this effect as well, after Strand shows up at Lawton, building off of his promotion from a couple of episodes ago. Strand also urges John to leave the murder alone to boot. He even helps bear witness to Janis suddenly confessing to the ranger’s murder, since they were lovers who planned to run away, before the victim allegedly backed out of the plan. John knows the confession is a lie, and vows to intervene in the execution, only to later see that Virginia moved the execution up without telling him. The result is John coming up to the scene of Janis having been torn in half by walkers, and since re-animated. Janis may not have been one of this show’s most compelling characters, granted, but her loss is nonetheless very heartfelt for John, who puts her out of her misery, subsequently being cut off from his only means of writing to June. Yeah, Janis was passing off John’s letters to June somehow. It’s never really explained how.

Regardless, this ends up being moot anyway. Virginia gives John a key in gratitude for his ‘service’, and further rewards him by transferring June to Lawton. It is genuinely nice to see Jenna Elfman again for the first time this season, but even a reunion with June proves to be small comfort to John. This is also meant to build off of a heartfelt conversation between John and Jacob earlier in this episode (Jacob has also ended up working in Lawton since Season Five ended), wherein John reveals that his father, also a former cop, forged evidence to convict a serial killer, costing him the trust of his friends and his marriage, along with all of his future career prospects, in the process. John’s struggle with nagging rot underneath an otherwise functional system is also wonderfully exemplified by an aching, rotted tooth that irritates him throughout this episode, a tooth that Virginia never gets looked at, and nor does John. The end result of John just grabbing a pair of pliers and removing the tooth himself is a perfect way to end his core story arc this week, proving that John will go through whatever he has to in order to set things right. It’s heartfelt and badass, and continues to prove why John is one of the best characters on Fear the Walking Dead at this point.

Occasionally, we also get some small scenes with Morgan this week, who is indirectly handed Grace’s jacket by Daniel. While trying to get Emile’s former dog, whom Morgan has presumably adopted, to get Grace’s scent, Morgan’s car is then sideswiped by two strange men. The two strangers quickly go after the key that Morgan grabbed from Emile’s body at this point, and Morgan is subsequently forced to kill them. More enemies of Virginia? It sure looks that way! Like Morgan says, what could this key possibly open that’s such a big deal? Let’s not forget as well that this key mystery was previously hinted at on the flagship Walking Dead series during Season Eight, in an episode also called, “The Key”, go figure. Georgie presents Maggie with a literal, “Key to the future” in that episode, and Morgan’s key seems to directly connect to that. Is this another nod to something regarding the CRM or the Alliance of the Three? Or something else entirely? Either way, it’s very interesting to see Fear the Walking Dead connect to the main Walking Dead series once again, this time in a more subtle, but just as effective way.

“The Key”, the episode for Fear the Walking Dead specifically, is an impeccably satisfying and well-executed episode, especially when it can expertly take advantage of the storytelling centering around one of the series’ best characters. John’s principles are put to the test in a legitimately clever and interesting way here, eventually leading to his inner sense of justice prevailing, despite even his own allies urging him that he can’t save Janis, and he shouldn’t try. While it’s true that John failed to save Janis in the end, who tragically met her demise as promised, John’s own resolve to defy Virginia has no doubt only gotten stronger, despite Strand likely having his own plan regarding what to do about Virginia’s influence. Even the return of June doesn’t seem to be quelling John’s demons at this point. Clearly, there are now several sparks of rebellion being struck within Lawton, but it remains to be seen whether any of them have any chance of undermining the incredible stronghold that Virginia has built on a bedrock of violence and deception.