The flagship Disney+ original series has finally returned for its second season, mercifully untouched by the entertainment industry’s myriad production complications caused by the COVID-19 pandemic. The Mandalorian made even bigger waves this year due to its multiple Emmy nominations, and that’s before considering that it remains one of the only Disney+ original shows that’s worth a damn at this point. Season One ended with some choice teases of impending crossovers with the rest of the Star Wars universe as well, and Season Two is already delivering on those in this week’s season premiere, on top of bringing in more standout guest stars for Din Djarin’s latest misadventure.

“Chapter 9: The Marshal” begins with Djarin and The Child looking to find any other surviving Mandalorian, who could possibly point them to The Child’s mysterious race of Force-wielding sorcerers. Their first stop brings them to another exceptionally cool cold open for The Mandalorian, as Djarin goes to meet with a cycloptic alien information broker called Gor Koresh, voiced by a barely recognizable John Leguizamo. This interaction predictably goes South and ends in a fight, but the information gleaned is nonetheless valuable, if a little frustrating; There’s a Mandalorian on Tattooine, a planet that Djarin has already visited more than once. 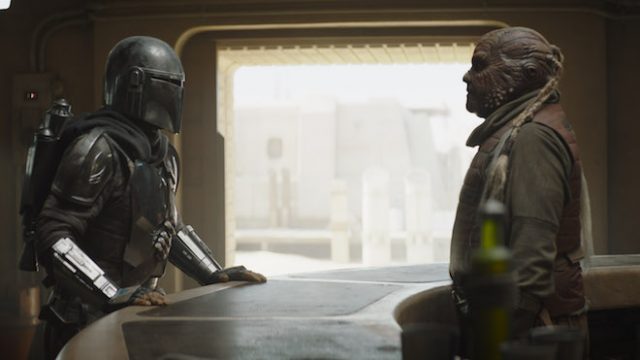 The seedy tone and moral ambiguity once again shines for the start of The Mandalorian’s second season, as Djarin once again prevails during an attempted betrayal, before leaving the desperate criminal that begrudgingly helped him to die. The Mandalorian’s incredible polish in Season Two remains standout among streaming shows to boot, easily sucking viewers back into this Western-esque sidestory in the Star Wars canon, particularly when Djarin’s journey once again takes him back to Tattooine. There’s even a cute reunion with Amy Sedaris’ mechanic, Peli Motto here, who agrees to fix up Djarin’s ship while he goes to the hidden town of Mos Pelgo, the supposed whereabouts of the wayward Mandalorian. The Season One finale’s events are also nicely acknowledged by Djarin being more tolerant of Peli’s bumbling droid team, presumably after his emotional exchange with IG-11, and IG-11’s subsequent sacrifice. Aw, that’s kind of sweet.

Of course, the hunt for the lost Mandalorian is not so easy in the end. Despite borrowing a Landspeeder and making it to Mos Pelgo without incident, Djarin quickly learns that the ‘Mandalorian’ watching over the town is simply some guy that bought Mandalorian armour off of some Jawas. Star Wars fans will nonetheless be thrilled at the sight of the armour however, since the heavily damaged green Mandalorian set is unmistakably the attire of OG Mandalorian, Boba Fett! This sets to work on what’s sure to be a defining mystery throughout The Mandalorian’s second season, namely whether Boba Fett survived his tumble into the Sarlacc Pit during the events of Star Wars: Return of the Jedi (he definitely did in Star Wars’ former Expanded Universe media, but that’s now moot after Disney took the EU stories out of official Star Wars canon), and what he may have been up to since the events of the original Star Wars movie trilogy.

For now however, Timothy Olyphant delivers another highlight guest stint as Cobb Vanth, the man that’s appropriated Boba Fett’s old armour. Cobb even promises Djarin the armour if he does a rather straightforward favour for the town; Rid it of a menacing Krayt Dragon that’s been eating Bantha livestock, and constantly threatening to devour the entire town at some point in the near future. This sets up a pretty straightforward conflict for an episode of The Mandalorian, and in fact, this is probably the one downside to an otherwise fun and faithful season premiere for the show; It’s heavily adhering to a well-worn formula. This means that there are almost no real surprises in this episode, beyond the Boba Fett revisiting. This issue also somewhat sucks the suspense out of the actual confrontation with the Krayt Dragon to boot, even if this battle does nonetheless remain pretty stylish and cool in the moment.

Another potentially cool turn occurs shortly before this mission as well, when Djarin and Cobb end up beset by Tusken Raiders. Djarin however speaks Tusken, and manages to convince the Tusken Raiders to ally with Cobb and Mos Pelgo, in the shared interest of killing the Krayt Dragon. This sets up an initially promising conflict, wherein a well-known, liberally savage alien race has to ally with human characters to defeat a bigger, more dangerous monster, but this is another element of this season premiere that fails to spark. The bad history between Mos Pelgo and the Tusken Raiders is pretty scant, and they seem to simply despise each other because the plot says so. Even that’s moot during the actual Krayt Dragon battle as well, since the two races quickly put their differences aside, and fight together with perfect precision once the big beastie actually engages them.

Like I said though, at least the battle itself is cool. Cobb even proves to have solid mastery of Boba Fett’s old jet pack and weapons grid, helping Djarin repel and eventually slay the Krayt Dragon. This also presumably leads to some sort of fragile peace between Mos Pelgo and the Tusken Raiders, assuming both sides agree to stay out of each other’s business. Regardless, Cobb surrenders Boba Fett’s armour to Djarin, teasing a re-appearance on the show down the line, which would be great, because, like Cara Dune, Cobb is a pretty cool guest character that will inevitably be handy in another conflict. Thus, this season premiere ends with Djarin riding back to Peli Motto’s garage, only to be observed by a Jango Fett clone in the final seconds, complete with Temuera Morrison reprising this role from Star Wars: Attack of the Clones! This would appear to be Boba Fett himself at first glance, now wandering the sands of Tattooine as a nomad following the fall of the Empire, and having lost his Mandalorian armour. We’ll have to see if that first impression is correct though. Not everything has been how it initially seems in The Mandalorian, after all.

There’s no current payoff to the survival of Moff Gideon from the Season One finale, nor his eyebrow-raising Darksaber, but The Mandalorian still manages to kick off its second season on an entertaining, if familiar note. There’s clearly going to be a slow burn to some of The Mandalorian’s mysteries in Season Two, which may explain why this season premiere is falling back on a lot of established story tropes, rather than going the extra mile to do something truly unexpected. Still, the tease of Boba Fett’s survival in Disney’s revised Star Wars canon is very exciting, especially when Boba will seemingly inevitably cross paths with Djarin and The Child at some point. Speaking of The Child, it’s amazing that this first episode for Season Two somewhat nudges him into the background, considering that he’s easily surpassed Djarin himself in terms of current fan popularity. I imagine that there’s plenty of forces still coveting The Child and his power however, and I’m very much looking forward to seeing what Season Two of The Mandalorian has in store among its threats, once it decides to properly branch out again.

The Mandalorian 2.1: "Chapter 9: The Marshal" Review
The Mandalorian kicks off its second season with a fun, if overly familiar season premiere this week, as Djarin returns to Tattooine to seek a surviving Mandalorian.
THE GOOD STUFF
THE NOT-SO-GOOD STUFF
2020-10-30
81%Overall Score
Reader Rating: (0 Votes)
0%