The Mandalorian may have had a more by-the-book start to its sophomore season, but now that we’re into Season Two’s back half, it seems like the series’ biggest story developments yet are beginning to generate a lot of excitement each week! “Chapter 14: The Tragedy” is another episode with a very tough act to follow, after last week’s offering delivered an excellent live-action debut for fan-favourite Star Wars animated series character, Ahsoka Tano, and amazingly, the series manages to keep that high note going this week! Even with Ahsoka now being in the rear view (for now), we nonetheless get Spy Kids and Sin City director, Robert Rodriguez at the helm to realize one of The Mandalorian’s most exciting episodes to date here, as well as one that continues to pay off some standout teases from earlier in the series.

The brisk 32-minute length of this episode ensures a great focus on quality-over-quantity, and that kicks off right away, as soon as Djarin and Grogu land on Tython. After Grogu begins using the Seeing Stone as Ahsoka directed however, Djarin has to go investigate a strange presence, only to discover a mysterious cloaked man has followed him to Tython, the same one that Temuera Morrison portrayed at the end of this season’s premiere! This man should be very familiar to Star Wars fans as well, considering that Morrison is a Star Wars veteran who has been a part of the franchise since 2002’s Star Wars: Attack of the Clones, particularly when he demands the old, battered Mandalorian armour that Djarin received from Cobb Vanth at the very start of this season. If Djarin doesn’t comply, the man’s ally, another familiar character, will fire on Grogu! This is a tense stand-off, but it’s hardly the real danger, even when the mystery man’s ally is revealed to be none other than Ming-Na Wen’s Fennec Shand!

Apparently, Fennec has undergone a bit of a professional re-alignment since the events of The Mandalorian’s first season, when she was shot in the gut and left for dead by Toro Calican. That’s not something that many Star Wars fans will be focused on however, since we now officially have confirmation that Morrison (and yes, I buried the lead here), is portraying an old, grizzled Boba Fett, as confirmed by Fennec! We don’t currently get an explanation for how Boba survived his tumble into the Sarlacc Pit during the events of Star Wars: Return of the Jedi, but the fan-favourite OG Mandalorian from the original Star Wars movie trilogy is intent to reclaim what’s his. There’s not much time to negotiate though, due to some Imperial shuttles suddenly landing on the planet!

What follows is a fantastic extended action sequence that comprises the bulk of this episode. Rodriguez’s direction is truly sublime throughout, realizing a grand battle against Imperial Stormtroopers that feels tight and intense, even with such a wide landscape to work in. Star Wars fans will be especially elated to see that Boba hasn’t lost a step in the years since Star Wars: Return of the Jedi as well, effortlessly taking out Stormtroopers with a specialized club, while Djarin and Fennec help to pick off others. The Mandalorian has no shortage of thrilling, highly polished action scenes, but this entire sequence could very well be one of the show’s best! That’s not simply because we finally get to see that Boba Fett is indeed alive after almost a decade of Disney refusing to commit to his status in their revised Star Wars canon either!

Despite so much excitement throughout though, this episode still brought the drama, balancing that perfectly with so much wanton Stormtrooper carnage. Even as Boba fires a fantastic coup de grace, taking out both shuttles with one rocket (Boba being surprised at his lucky shot is also a brilliantly funny nod to Boba’s inexplicable, but enduring popularity as a fan-favourite Star Wars character, despite his lack of development in the original movies), he fails to spot Moff Gideon’s Imperial Cruiser further up, which fires a single fateful shot that blows up the Razor Crest! This is not only a huge dramatic blow to Djarin, who seemed to be clinging to his old pre-Empire transport out of traumatic principle following the Siege of Mandalore, but one that also forces him into allying with Fennec and Boba. Well, I doubt anyone is complaining about that arrangement, in fairness. Still, the loss of the Razor Crest is strangely heartbreaking, despite it being a junker of a ship that’s spent most of this season causing more issues than it’s fixed.

Amazingly, the Razor Crest’s destruction isn’t even the true ‘tragedy’ that this episode alludes to either! Instead, this occurs when the trio of anti-heroes fail to secure Grogu, who is successfully snatched by a bunch of prototype Dark Troopers! Many longstanding Star Wars fans previously speculated that Moff Gideon’s mystery project involved these classic Star Wars video game foes (who later re-appeared in various other stories throughout the former Star Wars Expanded Universe), and now it seems that fan speculation has been proven correct. For those who don’t know, Dark Troopers are a deadly new breed of Force-powered Imperial Stormtroopers, originally introduced in the mid-90’s’ PC and original PlayStation video game, Star Wars: Dark Forces. They began as droids (as they’re represented here), but later became actual living soldiers with light Force powers. Sure, they’re not anywhere near the Force level of Sith villains like Darth Vader or Emperor Palpatine, but needless to say, Dark Troopers are significantly more dangerous than ordinary Stormtroopers! 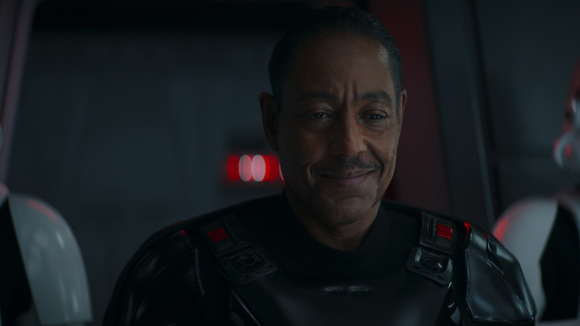 Speaking of dangerous, it was also sickly satisfying, if also a bit foreboding, to see this episode end with Moff Gideon walking in on Grogu torturing his own Stormtroopers, and laughing about it. This series has done a surprisingly good job of framing Grogu from multiple psychological angles, and yet still making his character feel valid and believable. Grogu is adorable and seemingly innocent, to the point where you forget that he’s a fiftysomething creature that was alive during the Clone Wars, but he also clearly has a ‘dark side’, so to speak. He’s not above Force choking people when he’s angry, or stealing the eggs of an endangered species to eat as a snack, or indeed, Force throwing Stormtroopers around as an act of petty revenge. The fact that this lovable character has a lot of Force power, and a lot of potential to become a dangerous force of evil in the wrong hands, makes his kidnapping by the Empire all the more hair-raising, in a way that wouldn’t be quite so potent if Grogu was universally adorable and innocent.

If you’re worried about Grogu though, rest assured that Djarin isn’t going to take his kidnapping lying down! After another brief visit with Cara Dune on Nevarro, who has accepted a new station as Marshal for the New Republic (as previously foreshadowed a couple of episodes ago), Djarin inquires about the fate of Bill Burr’s Migs Mayfield, and whether Cara can help Djarin bust him out to assist in liberating Grogu! This great tease rounds off an excellent episode perfectly, wonderfully setting up a fun story hook for next week, while continuing to maintain the outstanding momentum that The Mandalorian has been universally delivering throughout its second season’s back half so far. “Chapter 14: The Tragedy” stands as a highly engaging mix of superb action and emotional gut punches, particularly for avid Star Wars fans. Once again, the narrative impact behind this show’s latest episodes has been astonishing, to the point where even the confirmed return of Boba Fett feels small compared to the many other exciting developments that are now occurring.

It doesn’t look like that excitement is letting up next week either, what with Djarin putting together his very own ‘Suicide Squad’ of outlaws to strike back at the Empire after Grogu’s capture. Something tells me that The Mandalorian is still saving some of its best narrative turns for this season’s climax, and if its action scenes continue to deliver as they’ve done throughout this season, it will only further cement this Disney+ series as the best, most exciting Star Wars offering in years!

The Mandalorian 2.6: "Chapter 14: The Tragedy" Review
The Mandalorian continues to soar with another fantastic episode this week, as Djarin's and Grogu's journey to Tython ends with shocking and tragic consequences.
THE GOOD STUFF
2020-12-05
95%Overall Score
Reader Rating: (0 Votes)
0%